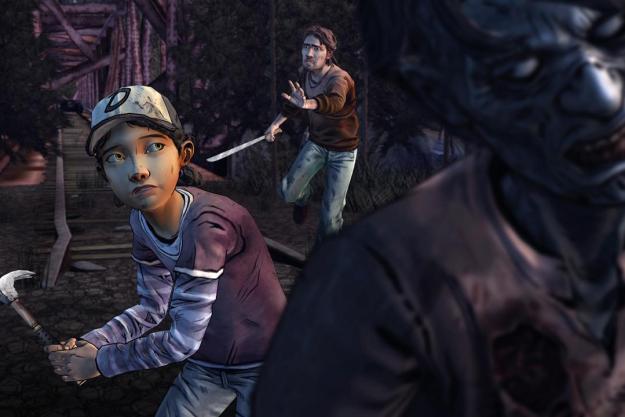 “The second episode of the Walking Dead’s second season is one of the finest episodes yet – and that’s saying something.”

Early in the second episode of Telltale’s The Walking Dead: Season 2, Clementine engages in a conversation with a new character. It’s a difficult conversation, with each choice you make carrying a weight that will likely not be revealed for a while yet, but there is a definite sinister tone to the dialogue. And then, with only a few carefully chosen words, everything you took for granted in the previous episode is brought into question, and the story goes in an unexpected new direction.

And all from one, brief conversation.

Telltale once again manages to craft a story that is never quite what you think it is going to be. The game leaves an obvious set of connections for you to make, then shows you the logic in your thinking. Are the people you are with really your friends, or has circumstance tricked you into thinking that? Are you fooling yourself, or are they fooling you? Will you stand by them? Should you stand by them?

Telltale is at the top of its game in A House Divided.

The ability to raise subtle questions like these is the work of master storytellers, and Telltale is at the top of its game in A House Divided. Your choices are packed with potential consequences, many of which won’t fully play out until future episodes, especially the choices that result in the ominous note that the character “will remember” notification

However, some decisions are so immediately impactful that you may not want to make a decision at all. It isn’t about choosing the right or wrong answer, it’s about choosing sides. No matter what, there will be fallout.

The game also never lets you forget who it is that will pay the price for those choices. In Season One, protagonist Lee Everett was a grown man. Conflict was unfortunate, but inevitable and as a grown man, Lee could handle the consequences. In Season Two, the protagonist is Clem, and 11-year old girl. It is massively unfair that she is constantly in a situation where her actions, regardless of her intentions, can end up getting people killed or causing conflict between others. But that’s the world of Walking Dead, and part of why Season Two is shaping up to be just as good, if not better than its predecessor. Episode Two hammers that point home, again and again forcing Clem to make impossible choices and then reminding us that she is a child.

Season Two is shaping up to be just as good, if not better than its predecessor.

In the first episode, the story was somewhat limited by the setup it needed to get out of the way. Players needed to reorient themselves to Clem as the primary character, an entire cast of new characters needed to be introduced, and both their situation and Clem’s involvement in it needed to be justified. It was a lot to get through, and the episodic treatment of the story turned out to be a slight disadvantage. Episode Two doesn’t have that limitation now that all the groundwork is laid, and it is one of the strongest single chunks of story in the entire series. There is no fat on it, no wasted moments of exploration or unnecessary dialogue. Every option is potentially impactful, and every move you make pushes the story further.

There is a bit more of a hands-off approach to this episode than most. You’re making as many choices as ever, maybe even more, but the amount of time you actually spend wandering around and solving puzzles as Clem is among the lowest in the series. That’s an inconsequential sacrifice though, since there is a weight to the choices you make.

This episode is also a visual improvement over the previous one, partly because the story takes place over a larger and more varied set of environments than the cabin and woods that were the focus last time. There is more to see, with impressive sights we haven’t seen before in the series, and a strong use of color that goes beyond the uniform, Earthy look of the previous episode.

The season can continue to churn out episodes as strong as this one, The Walking Dead Season 2 is on the way to matching the excellence of Season One. And that is saying something.