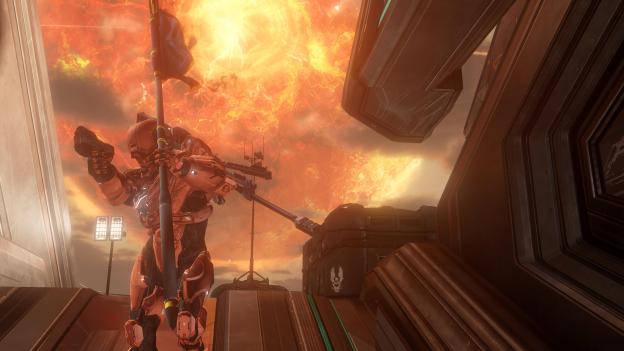 Microsoft is gearing up for gold with Halo 4, which launches worldwide on November 6. While the campaign mode has always been an integral part of the Halo franchise, it’s the multiplayer that has helped propel these games to the top of the Xbox Live online rankings. 343 Industries is well aware of the importance of multiplayer. The developer is blowing out the multiplayer experience with War Games (traditional multiplayer) and Spartan Ops (co-op multiplayer). 343 invited us to its studio in Kirkland to play some exclusive new multiplayer levels. Kevin Franklin, lead designer on War Games, talks about what’s new in this exclusive interview – conducted while he was playing the game.

Can you walk us through how you’ve improved multiplayer experience with War Games?

This is Infinity Slayer on Exile, which is one of our new maps in Halo 4. It’s a big vehicle map that’s shaped like a large donut. It really focuses on vehicles and team-based, big team combat. We’re playing Infinity Slayer, which is the all new version of Slayer for Halo 4. It was a real challenge for us as we basically re-invented the Slayer experience.

The biggest new edition is that the scoring system is completely different, so you’ll be earning points not just for your team, but also for yourself. And you can run ordinance, which is a reward drop from the UNSC Infinity. It’s the first team to 60 kills or 600 team points. The new weapon I’m using here is the Promethean Bolt Shot pistol. You can charge it up and unleash a one-hit kill or you can feather for faster.

The reward drops that come in are a mix of Covenant, Forerunner and UNSC weapons, plus the power-up system. You’ll notice when you’re playing the game that reward drops, or weapon drops, are now called out on the HUD. When a new weapon comes in, which happens about every two minutes or so, everyone can see them. It removes a little bit of that map knowledge edge that was required before. And it makes them much more meaningful objectives that really drive the flow of the match.

What do you guys call the new Warthog?

That’s a Gauss Warthog. It’s a normal Warthog that has a very fast firing chain gun on the back, almost like a rail gun or a pulse gun. The weapon is great for puncturing vehicles. It was a big decision that we made early on with how does each vehicle interact not only with players, but with other vehicles.

How many players can play?

We’re going up to eight-on-eight in our big Team Infinity Slayer story playlist, but in the regular playlist it’s four-on-four with a 12-minute time limit. I’d say 99 percent of our matches end on points, instead of time, which is exactly where we’d like it.

What are some examples of ordinance available in the game?

With each ordinance you have three choices, which are randomized but they’re also different for each map. The system randomizes what picks are the most intelligent ones for a map. The three choices here are the Fuel Rod Cannon, which is a big comeback from Halo 3; our new Binary Rifle, which is a Forerunner sniper rifle; and the Overshield, which is making a big comeback along with speed boost and damage boost. Once I pick an item – I’ll get the Fuel Rod Cannon — the system will automatically choose an intelligent location around me to call it in. Oh, I got killed by that Banshee truck, which are back again and improved.

Once you get killed do you lose your ordinance?

I lose it, but I can go back and pick it up. And if an enemy were to steal my ordinance, I’ll get extra points if I go kill him and get it back, so you can recoup some of your investment. You’ll notice that player is glowing red. He has damage boost on, which is a power up here to the Infinity ordinance system. That lets him increase his damage for about 20 to 30 seconds as a reward for helping your teammates, getting kills or killing with style. And those rewards are based on medals. I just earned 15 points for getting that kill — 10 of those points were for the melee kill and five were for the revenge. That bumped my ordinance meter on the left closer to getting a new reward from the Infinity. There’s my Fuel Rod Cannon right there, so it wasn’t too hard for me to go get it back again because I knew where it was. We’ve updated the radar, so it’s a little bit faster and more precise. It will also identify vehicles, weapons, ordinance and all sorts of things a little bit differently. It’s a little bit more intelligent at detecting the height of weapons.

What do the Promethean weapons add to the gameplay?

We have the new Forerunner and Pulse Grenades, which are our third grenade type in Halo 4. It drains the player’s energy if they get caught in the midst of the big blast, so it’s a really unique grenade. It’s like nothing we’ve ever seen before.

What’s the process been like in developing this multiplayer?

There really are a lot of new sandbox editions to this gameplay, but I think one of the testaments to our sandbox team is how good a job they did of really making them feel and all work together. That only came through with just hundreds of thousands of hours of play testing. The weapons and vehicles have all been re-tuned for this game. Fans always ask us if this is like the Halo 2 version of this, or is it like the Halo 3 version. What we’ve realized is it’s all like the Halo 4 version because the sandbox is so new. Everything has been re-balanced to fit with the ones being brought back and re-done for Halo 4.

How to play The Sims 4 for free
Is The Sims 4 on Nintendo Switch?
The 11 best asymmetrical multiplayer games of 2022
I can’t wait to go back to Street Fighter 6’s excellent Battle Hub
How to evolve Finizen into Palafin in Pokémon Scarlet and Violet
‘Wordle’ today, December 1: Answer, hints, and help for word of the day (#530)
Grieving in Elden Ring: my quest for closure in The Lands Between
Don’t miss this (Oculus) Meta Quest 2 bundle deal – save $50
Best Gaming PC Deals: Save on Alienware and HP
Xbox Game Pass adds Lego Star Wars and a former Switch console exclusive
Summer Game Fest returns just before E3 2023 next June
How to exfil in Call of Duty: Warzone 2.0 DMZ
Blaseball makes its absurd return in January with a dedicated mobile app