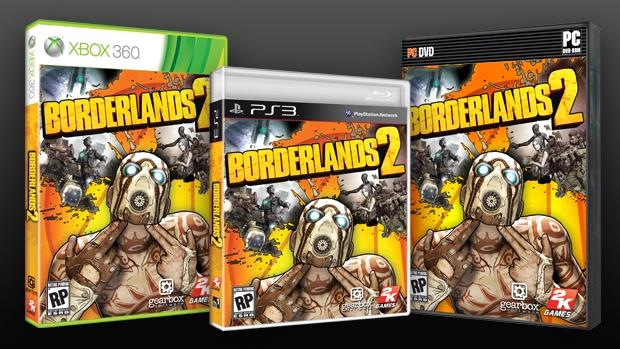 If you’ve been online since Tuesday on an Xbox 360, PS3, or while connected to Steam, you probably already know that Borderlands 2 was released, because you may have friends online playing it right now. They are probably enjoying it too. A lot.  They are taunting you with their new gaming acquisition. They are mocking you, challenging you to jump online and join them in what is shaping up to be one of the biggest hits of the year.

Don’t let them get away with that.

If you are a frequent reader of DT’s gaming coverage, than you probably know that we liked the game a whole bunch. You can check out our review here where we gave it a 9.5, something we don’t do too often. In fact, we liked it so much that we got a hold of five copies to give away.

We have two copies of the game on PS3, two on Xbox 360, and one Steam key for PC to give away, so there will be five winners in all. For your chance to win, all you have to do is answer a simple question: WHAT is the air-speed velocity of an unladen swallow!

That’s a joke, by the way. Please don’t answer that. Or do answer it with your platform preference, but be certain your answer is correct and be sure to show your work.

Now, for a chance to win, simply let us know what your favorite online game of all time is and why, then be sure to include your platform preference – if you don’t let us know your platform of preference, we can’t determine which group to enter you with. Choosing more than one platform is fine, but you can only win once.

The contest will end Tuesday, September 25 at noon PST, so enter now.

Update: THANKS TO EVERYONE THAT ENTERED, WE HAVE SELECTED FIVE WINNERS!  The winner should have recently received an email notifying them of their win.  Thanks to everyone who posted, check back later this week for our next contest, when we give away a copy of Madden 13 for the PS3!

Once the winners have confirmed they received the notification, and following their ok, we will post the names of the winners.

Congrats to the winners: Patrick Schjoett and the poster Sloridin.  The other three winners wished to remain anonymous.

All cross-platform games (PS5, Xbox Series X, PS4, Xbox One, Switch, PC)
Xbox Game Pass adds Lego Star Wars and a former Switch console exclusive
You can win cash with PlayStation’s new tournament feature. Here’s how to sign up
Now’s the perfect time to stock up on PS5 controllers
The best weapons in Modern Warfare 2: every gun ranked
Pokémon Scarlet and Violet: How to beat the Elite Four
The best Intel processors for 2022
Call of Duty: Warzone Mobile: release date and preregistration details
Monster Hunter Rise is coming to PlayStation and Xbox, minus cross-platform saves
Best gaming laptop deals: Save on Alienware, Razer and more
‘Wordle’ today, December 2: Answer, hints, and help for word of the day (#531)
Elden Ring for PS5 is $15 off with delivery in time for the holidays
The best iPhone games to play in December 2022: Marvel Snap and more