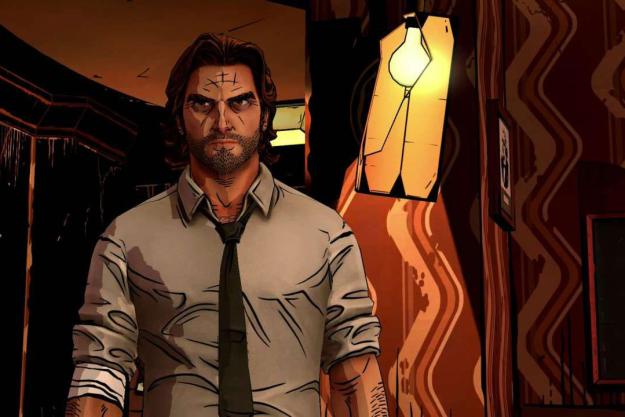 The Wolf Among Us – Episode Three: A Crooked Mile
Score Details

“The latest episode of The Wolf Among Us, A Crooked Mile, effectively torpedoes any theories you might have had on where the plot is headed.”

Spoiler alert: DON’T read this until you’ve played through the first two episodes of The Wolf Among Us. This review assumes that you’re fully caught up on the story so far, so spoilers are ahead. In truth, you may want to just go ahead and play the latest episode before you read about it here.

Even fairy tale characters run out of money sometimes.

Sheriff Bigby’s bottled-up rage and dark past dominate much of the narrative in Telltale Games’ The Wolf Among Us, but it’s larger themes of desperation and loss – thrown into stark relief by the latest episode, A Crooked Mile – that breathe believable life into the fantasy universe. This is a refugee community of beings just trying to make the next rent check and eat the next meal, but not even Fables are free from the parasitic drain of a murky underworld that preys on the weak.

A Crooked Mile transforms what started as a murder mystery into something else entirely.

A Crooked Mile transforms what started as a murder mystery into something else entirely. There’s still no clarity on why two women are dead, or what sort of message was sent when their severed heads were presented on the front steps of the Woodlands. The sinister forces working behind the scenes have knowledge that Bigby (and the player through him) does not possess, but it’s increasingly clear that these deaths factor into a larger plot. The villain hinted at in this episode’s title – the so-called Crooked Man – is playing on a field that we can’t yet comprehend.

Telltale has built an elaborate jigsaw puzzle in The Wolf Among Us, and A Crooked Mile is all about flipping over the pieces. The problem is, we don’t have any idea of what the full picture looks like. From Bigby’s mad rush to warn Snow White at Lily’s funeral to a difficult, three-pronged choice held hostage by a ticking clock, the feeling is always one of playing catch-up, of being two steps behind the plot’s mysterious puppeteer. Is it acting Fabletown mayor Ichabod Crane, ostensibly identified as the killer? Woody the Woodsman, who so conveniently connects to everything that’s happened thus far? Or perhaps, impossibly, one of the dim-witted Tweedle brothers?

The events of A Crooked Mile torpedo virtually every one of those theories, and any number of others. The big picture won’t be any clearer by the time the credits roll, but you do walk away with a better sense of the obstacles arrayed in front of Bigby.

It’s only on a second playthrough – which, to be clear, we don’t recommend for those invested in the mystery – that you start to notice the interchangeability of certain puzzle pieces. The title A Crooked Mile refers to Bigby’s continuing journey, but it could also be interpreted as a nod to the narrative framework that’s characterized this studio’s work since The Walking Dead. Imagine a Telltale episode as an elaborate spiderweb maze with fixed entry and exit points. You can trace your way along any number of strands as you go, but you’re always going to start and finish in the same places.

The studio’s talent for seamlessly weaving actual choice in alongside the illusion of choice has evolved since The Walking Dead won its many 2012 accolades. The Wolf Among Us feels more organic than its predecessor in the way that different clues and revelations in separate locations lead to the same ends. The result is a masterful illusion that breaks only rarely, usually in the context of branching dialogue exchanges where a character’s response doesn’t always sync up perfectly with whatever you chose to have Bigby say. It’s a rare occurrence at worst, not at all disruptive to the overall experience, but it shows that Telltale, for all its narrative wizardry, is not infallible.

The Wolf Among Us continues to develop into one of the more nuanced stories that the San Rafael-based studio’s ever told, bolstered by the rich fantasy universe painted in Bill Willingham’s Fables comics. A Crooked Mile serves as a perfect narrative midsection, following up the scene-setting and misdirection of the first two episodes with game-changing revelations that beget a battery of new questions.

We still don’t know where Bigby’s crooked path through the plot will end up, but we’ve got a clearer picture now of the fragile refugee existence that the sheriff and his fellow Fables cope with.

This game was reviewed on a first-gen Alienware X51 gaming PC using a code provided by Telltale Games.