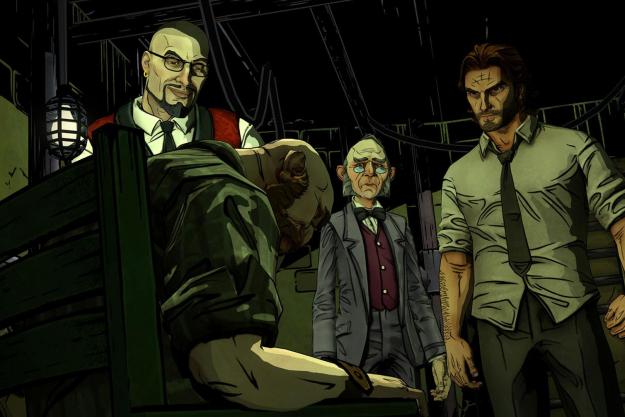 The Wolf Among Us: Season One
MSRP $25.00
Score Details

“Telltale Games scores another major win with The Wolf Among Us: Season One.”

This is a review of Telltale Games’ full first season of The Wolf Among Us. Unlike our previous, single-episode looks, which fell more into the realm of spoiler-y recaps, what you’ve got here is a spoiler-free account of the first season’s strengths and weaknesses. If you’re curious to read about what Telltale’s wrought but don’t want anything from the story given away, this is the review you’ve been looking for.

Much of the “It’s not TV, it’s HBO” ethos is wrapped up in Telltale Games’ most recent efforts. With that tagline, the cable network that spawned everything from The Sopranos to The Wire to Entourage made a simple statement: Our stories aren’t like the others you see on TV. The same is true of Telltale. Most games come with some amount of story, but the San Rafael-based developer is actively working to evolve video game storytelling in the same way that HBO capably proved that TV can be more than one 30-minute sitting every week.

First, some background: The Wolf Among Us is adapted from Bill Willingham’s Fables comic book series, in which fairy tale characters flee to our known world – the “Mundy,” as they call it – after the mysterious Adversary takes over their Homelands. They settle in New York, establishing a secret community called Fabletown in the heart of New York City. Wolf picks up several decades before the comics, with a story focusing on Fabletown Sheriff Bigby Wolf… yes, that Big B. Wolf.

The Wolf Among Us is a more traditionally structured journey than The Walking Dead: The Game‘s has been. The latter effort features a clear-cut protagonist pushing back against a rotating cast of antagonists in a world quite unlike our own. In Wolf, on the other hand, star Bigby Wolf isn’t nearly as absolute, and he’s contending with a very familiar environment. There’s no savior scenario in which he’s protecting a relatively defenseless charge from the nastiness in the world (as in Walking‘s first season) and there’s no childlike innocence to keep him from committing truly evil acts (as in Walking‘s second season).

Bigby is a Bad Guy of legend who’s been forced by circumstances beyond his control to live in service to a community of refugees, many of whom fear him. The degree to which he embraces his inner Big Badness is always driven by the player. Across the five-episode first season of The Wolf Among Us, Telltale very successfully goes all-in on creating scenarios that challenge players with not just connecting Bigby’s dots, but deciding where those dots fall on the page to begin with.

All of this plays out against a story that ponders the difference between “right” and “wrong” in a system that is fundamentally broken. The refugee residents of Fabletown are victims of circumstance, doing their best to eke out an existence in a world that would never understand them. They’ve been forced to sacrifice some measure of personal freedom in order to hide in plain sight. Bigby stands at the breaking point between the community’s enforced secrecy and the Fables’ desire to live as freely as they ever have.

Is it right that a speaking, thinking, biped toad should be forced to shoulder the high expense of magically concealing his identity if he wants to live with among friends in New York City? No, but it’s the law. Bigby presides over these disenfranchised Fables as their judge and jury. He may be charged with keeping the peace, but in the eyes of many, his Sheriff persona is just as villainous as the Big Bad Wolf identity he left behind. The decisions you make in The Wolf Among Us don’t just impact the A-to-B momentum of the plot; they also color Bigby’s reputation within the Fabletown community.

What’s really important in The Wolf Among Us isn’t the range of choices presented to all players, it’s how each choice that you make as an individual reinforces the illusion of a singular plotline. Bigby can exit the first season with a sizable trail of bodies behind him or none at all, and the rest of the story organically shapes itself around that. Or that’s how it seems.

In truth, every moment of Wolf is carefully scripted. Individual branches in the storyline fan out from a key moment, only to dovetail back into one another for the next important story point. Only occasionally do you see cracks in the illusion, usually an odd bit of dialogue in which the reading doesn’t perfectly match to the emotional nuance of the moment. These are quickly forgotten, however, in light of the larger achievement.

The only shortcoming to really call out is the episodic delivery timing. Moreso than in The Walking Dead, there’s an emphasis on a large and ever-growing cast of characters in The Wolf Among Us. So when 30 days (or more) separate each new chunk of story, it’s a challenge to put yourself back in the right mindframe. You’re not likely to forget the arc that Bigby was traveling along, but it’s easy to lose track of how and why the supporting cast factors in, even with “previously on…” clip montages preceding each episode.

Telltale continues to assert its identity as the premiere teller of interactive stories in video games.

This isn’t an issue when you’re tackling a season after it’s been fully released, but tighter release timetables for Telltale’s episodic series in the future would go a long way toward turning the studio into the video game cable network it’s built itself as. The narrative in The Wolf Among Us remains an impressive achievement, but the space between each chapter worked against it.

That’s a minor complaint, to be clear, and one that becomes completely inconsequential to you, the reader, now that the full season is unfurled. In the here and now, the first season of The Wolf Among Us has concluded and it’s one helluva great ride. Telltale continues to assert its identity as the premiere teller of interactive stories in video games. It shifts gears away from the doomsday scenario of a zombie apocalypse, and in so doing delivers a much more relatable story.

Yes, Wolf is focused on the admittedly fantastical plight of refugee fairy tale characters trying to carve out a secret existence in the real world. But the story’s good versus evil tale – and the degree of control that players get to exert over how each of those opposing sides is defined – is very much grounded in the ethical landscape that we know and interact with in real life on a daily basis.

Among Us VR, Ghostbusters, and more coming to Meta Quest 2