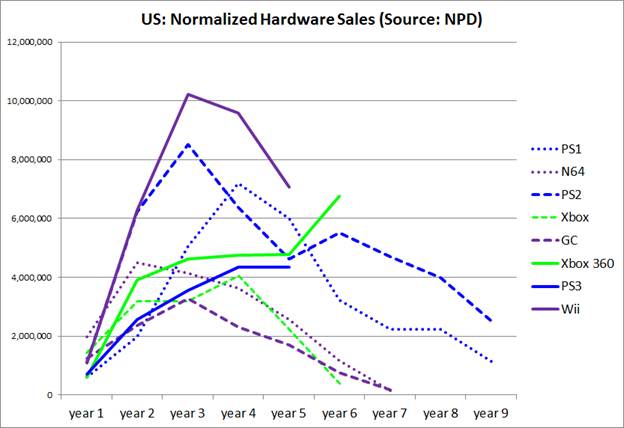 Microsoft recently released some stats about the Xbox 360 via its Major Nelson blog. According to its calculations, 55 million Xbox 360 consoles have been sold in 38 countries to date, and sales are still picking up (which Microsoft likely has Kinect to thank for). So besides that fact that Microsoft wants to show off how well it’s been doing, what else could this indicate? It means that anyone holding out hope that Xbox will surprise us with a new console announcement at E3 or anytime in the near future should prepare themselves for disappointment. The blog even directs users to a Forbes post on the news that reads “Xbox Sales Surging, Meaning No New Console Necessary.” Microsoft couldn’t be making this much clearer.

Not that a next-gen console announcement was expected. Last we heard, 2014 was the soonest we’d see a new Xbox device but that Microsoft might be working on some sort of Kinect upgrade that would launch sooner. There’s no arguing that the Xbox 360’s sales are impressive though: While competitors models are starting to lose new consumer dollars, the 360 has picked up steam.

But E3 won’t come and go without a significant announcement from Microsoft. Rumor has it that the company plans to implement a subscription TV service into Xbox LIVE. Winrumors claims that the Xbox LIVE Diamond TV service (codenamed Orapa) will use a “virtual cable operator” to stream content from the Internet, for which users will be charged a monthly rate. “Microsoft is currently in last minute negotiations to secure the necessary agreements in time. Apple is in a similar position, speaking to several media groups ahead of its iCloud announcement on Monday,” said the site’s anonymous source. The Diamond TV service would also allow its subscribers to watch shows with their Xbox LIVE friends, something we got a bit of an intro to at CES.

It’s clearly a smart move for Microsoft, and what Xbox users want. Xbox LIVE subscribers are racking up more than 2 billion hours a month using the console’s entertainment hub. The 360 has become more than just a gaming device, and we’ll find out exactly how Microsoft intends to capitalize on this in just a few days. We’ll be at E3 to cover these announcements next week.

Topics
Best Buy is having a 24-hour flash sale – the 5 best deals
Even without a big exclusive, Xbox quietly dominated 2022
Xbox Series X tips and tricks: how to set up your new console
Hurry — Best Buy is extending its sale on must-have holiday gifts
How to connect an Xbox controller to a PC
GTA 5 cheat codes and secrets for PS4, PS5, Xbox, and PC
WWE 2K23: release date, editions, pre-order, and more
Despite divisive dialogue, Forspoken gets a lot right about open-world games
The best RPGs for the Nintendo Switch
How to link your Fire Emblem Engage and Fire Emblem Heroes account
Xbox and Bethesda’s Developer_Direct: how to watch and what to expect
Goldeneye 007 comes to Game Pass and Nintendo Switch later this week
The best iPhone games in 2023: 31 games you need to play right now