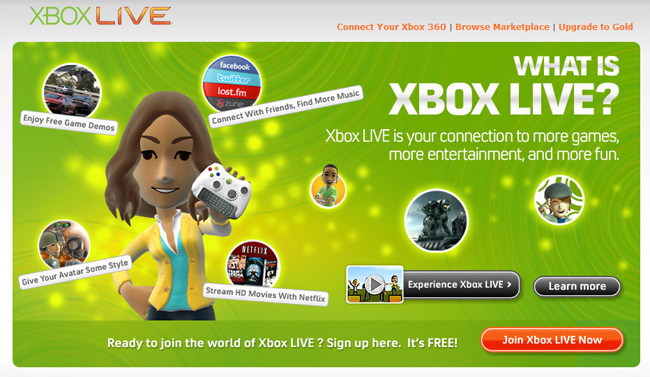 Although it is standard practice for Microsoft to withhold actual sales results of products, Bloomberg is reporting that the Xbox Live sales have generated around $1.2 billion in revenue this year.

According to Microsoft, about half of the 25 million XBL users paid the annual fee of $49 to play online games, which would amount for about $600 million. The rest was generated by movie rentals and purchases, avatar additions and XBL arcade games. If the estimate proves accurate, it is good news for Microsoft, who have seen sales beginning to slip compared to rivals Sony. Microsoft is also banking heavily on the release of the Kinect gesture–free controller, but judging by the low pre-orders of the Kinect, the early indications are not looking great.

Sony recently debuted its own online subscription model, the PlayStation Plus service, which will also run $49 per year. It will take some time for the Sony service to reach anywhere near the levels of the XBL, and Microsoft is taking full advantage of the head start they are currently enjoying.

“When it comes to online gaming, they’re [Microsoft] the only significant alternative to us,” Activision CEO, Bobby Kotick, told Bloomberg. “We’re driving a lot of the subscription interest and certainly hours of game play.”

Planned in the near future, Microsoft will introduce ESPN streaming to the Xbox 360, are considering an exclusive television channel, have introduced new family membership plans, and have struck an exclusive deal with Activision, distributor of the Call of Duty series, that will give it a month of exclusivity on any upcoming expansions for the series. Call of Duty: Modern Warfare 2 currently holds the record for the highest grossing download ever on XBL.

Deathloop on Xbox doesn’t change much, but is still great
The PS5 games with the best graphics
Hurry! This Alienware gaming laptop deal cuts over $1,000 off the price
Hellblade developer Ninja Theory confirms it won’t replace voice actors with AI
How to pre-order Assassin’s Creed Mirage: retailers, editions, and bonuses
‘Wordle’ today, September 22: Answer, hints, and help for word of the day (#460)
Sega is putting all of its chips on the table with Sonic Frontiers
The best gaming tablets for 2022
Fortnite Chapter 3 guide: All week 1 quests and how to complete them
Cyberpunk 2077 resurges with 1 million daily players this week
Dragon Quest Treasures shows off monster-catching gameplay
All Fortnite Chapter 3, Season 4 quests
The best wireless keyboards for 2022