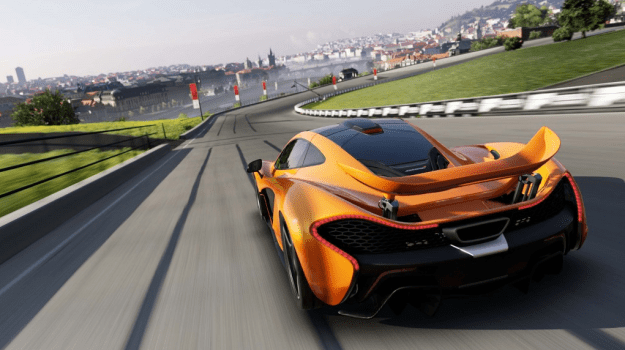 Microsoft chose to focus much of its Xbox One announcement on hardware details, but it wouldn’t be a console reveal without a few scattered details on the games coming out for it. The event closed with the much-publicized worldwide reveal of Call of Duty: Ghosts, which we’ll be tackling in a separate post, but that wasn’t all. Microsoft trotted out a number of first- and third-party reveals, all of which we’ll detail below.

On the first-party side, Microsoft Studios and other affiliated  developers are currently pushing toward releasing 15 exclusive games in the first year of the new console’s life, eight of which amount to entirely new franchises. However, we only heard about two of those titles during the presentation: Forza Motorsport 5 from Turn 10 Studios and Quantum Break from Alan Wake developer Remedy Entertainment (a third party studio). Trailers for each game rolled to offer a sense of what to expect.

As you might imagine, Forza 5 looks a whole lot like Forza 4, only better. The CG trailer spends a lot of time zooming in for close-ups on different parts of the car, with the clear intent of highlighting the level of graphical detail achievable on Xbox One. The variance between the different textures is remarkable, though it’s nothing that a high-end gaming PC from 2013 can’t deliver. That’s the whole idea though: Xbox One isn’t going to change the way games look across the board, it simply (along with Sony’s PlayStation 4) brings console gaming closer to what a $2,000 computer can deliver.

Considerably less was shown from Quantum Break. The tagline – “Time is the fire in which we burn” – seems to suggest there’s an element of time travel in the game. Live-action mixes with CG in the trailer, flipping between a flesh-and-blood little girl who claims to have some kind of special power and an animated look at a freight ship seemingly jump forward a brief distance in time and space, resulting in a collision with a bridge. The trailer ends with a brief glimpse, also CG, of what might be the tail end of a combat encounter. There will be more on this one at E3, no doubt.

The presentation also brought word of Electronic Arts’ Xbox One plans, at least as far as the EA Sports division goes. Four games are currently in development for the new console: FIFA 14, Madden 25, NBA Live 14, and the latest edition of UFC. All four are built on the publisher’s brand new Ignite engine; a brief but beautiful trailer offered a look at the four games, but the cinematic presentation made it hard to get a sense of what gameplay might look like. EA did promise that all four games will receive streaming content every day that “impacts the way you play,” but no other details were offered.

In related news, just-issued press releases from Square Enix and Ubisoft confirm that Thief, Watch Dogs, and Assassin’s Creed IV: Black Flag are all confirmed Xbox One titles. You can expect a flurry of similar announcements in the coming days now that third-party publishers are free to mention the next-gen Microsoft box by name.