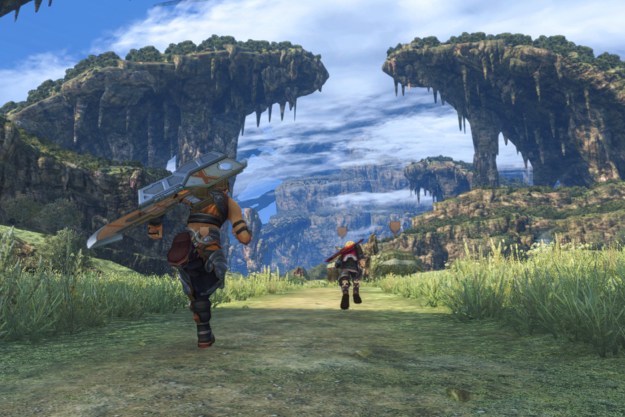 “...a titanic JRPG with plenty of charm dusted atop its newly softened exterior.”

One of the Wii’s crowning achievements has finally made its way to the Nintendo Switch, and it’s easily the best way to play what should be considered a JRPG classic. Xenoblade Chronicles: Definitive Edition gives players of its successful sequel a new way to experience the story it referenced in its closing moments while giving long-time fans the chance to explore its vast world without the technical shortcomings of the original hardware.

Potentially doused by Final Fantasy VII Remake (aka: one of the most grandiose RPG glow-ups in history), Xenoblade Chronicles: Definitive Edition isn’t going to blow minds, but it’s a refreshed epic that deserves to be played by anyone even remotely interested in JRPGs made by anyone but Square Enix.

Taking place across two hulking humanoids bereft of life after an ancient battle, the people and creatures that call these titans their home are at war. Shulk, the heir to the only weapon capable of defeating the machines across the pond, sets off to avenge a death, picking up a few companions along the way.

It’s a setting that conjures up countless questions from the get-go, fueling a want to explore its isolated world. The idea of traveling over limbs can get lost when traveling from point A to B, but an abundance of caves and covert pathways adorn its truly expansive zones, helping to keep the game from feeling as small as it looks from the outside.

War of the worlds

The whole round trip across the Bionis, Mechonis, and wherever else you end up fits neatly into the standard 40-hour JRPG timeframe, but there are plenty of other routes to take to extend the game far beyond this average.

The affinity chart, a tool used to measure friendships between characters, returns in its convoluted state, giving heaps of depth to not only the game’s main cast but also the copious amount of named NPCs for budding loremasters to dive into. It’s something that might alienate a casual crowd, but that can be almost completely ignored by those in a hurry.

…some of its finer systems can get lost in the rabble.

Getting everything you can out of this game isn’t like pulling teeth. It’s time-consuming for sure, but as a world that exists literally on the shoulders of a once-living being, fueling curiosity from the start, the answers are there if you need them, and tucked away if you don’t.

The way Xenoblade Chronicles: Definitive Edition drip-feeds lore should be enough for casual gamers, but die-hard fans can elongate the experience through copious side-quests, gaining even more insight into the world as they cruise through hidden caves and around curious cliff edges. Other big-budget JRPGs often struggle to balance solid storytelling and pacing, but Monolith Soft manages to make it look like an effortless endeavor.

Still, while traveling the world and chatting up its people is enough to pull you forward, battles can get a little drab and dull as the adventure goes on and new systems complicate matters. Battles use a system not too dissimilar from your average MMORPG. You have full control over your chosen party leader in battle with your two choice companions handled by the game’s A.I.

By mixing an action-bar full of skills and frequent auto-attacks together you can gain an advantage through positional strike bonuses, combo attacks, afflictions, and chain attacks that pause the action, giving you a rare opportunity to choose how teammates direct the flow of battle.

It’s a great system when it works, with combat feeling about as fast and responsive as your average online RPG, but strict character roles often mean tossing out your team to include a new favorite.

Swapping out your party leader allows you to try out a different role in combat, a feature that’s new to Definitive Edition, but there’s a good chance your favorite character won’t play how you like, pushing you back to someone like Shulk for powerful strikes, or Melia for a more complex strategy.

It would have been nice to see Expert Mode allow you to freely cycle through the party. Seeing a character squander a combo skill just before the perfect opportunity never gets easier to swallow. Healing is usually my go-to role, but Sharla’s lackluster kit can leave many smaller battles feeling a bit slow and uninteresting, creating a desire to cycle between characters as the fight goes on.

Somewhat rectifying this is Shulk’s ability to foresee certain attacks and their consequences. You can spend the party gauge to warn other characters and dictate their next move to influence the outcome, but it’s too random and infrequent to feel truly part of the experience.

This was the hallmark of the game’s battle system in the Wii days, and while it’s still very cool to think about, it’s one that doesn’t feel quite so fluid when cooldowns threaten its usability.

Character customization and party flexibility is a key part of any RPG’s identity. Xenoblade Chronicles: Definitive Edition isn’t bereft of this at all, but just like its sequel, some of its finer systems can get lost in the rabble.

New skills trickle onto your hotbar so as to not overwhelm, but juggling skill upgrade points and numerous character-specific skill trees can lead to long lulls as you try to plan out party progression and grind out the relationships needed to make the most of them.

Remastered where it matters

For those who like aesthetic customization, beyond the new time trial zone, there are dozens of unlockable outfits available through the achievement system, barring cool cosmetics behind challenges to encourage exploration across the game’s huge zones.

The Prodigal set, in particular, makes it look as if Shulk and his inter-species group of fate changers have already been on a world-altering quest. Either that or a Star Trek convention.

Xenoblade Chronicles: Definite Edition is a titanic JRPG with plenty of charm dusted atop its newly softened exterior

Back on the topic of this remaster package, character models are by far the biggest graphical difference on display. The updated visuals connect this game and its canonical sequel in more ways than just their stories, unifying them in the same saturated art style that caused a slight stir of controversy when Xenoblade Chronicles 2 was first revealed.

It was its colorful cast of fun and feisty characters that managed to sway perceptions, and being retroactively applied to the original has the same effect. Characters reject their old flat-faced features in favor of full profiles, enabling the kind of facial expressions necessary for a game of contrasting tones to properly shine.

Frame rates and texture filtering issues are apparent, but visible draw distance and resolution bumps help elevate the world’s vistas to be more in line the game’s grand setting. The original scope is much clearer to see, but there’s still only so much the predominantly handheld Nintendo Switch hardware can achieve.

It’s disappointing to say you’re likely to forget you’re playing a remaster at all, but compare a scene on offer here to the original on YouTube and you’ll see just why Monolith Soft focused its efforts on the characters — the parts that truly matter in this kind of game.

Where this remaster may let you down in the visual department it more than makes up for with Future Connected; a 15-20 hour epilogue accessible from the get-go that better links the game and its sequel together. But temper your expectations if you’re after a whole new experience.

It’s more of a story thread than Xenoblade Chronicles 2‘s Torna: The Golden Country expansion, but having Monolith Soft write a new chapter for a 10-year old game is a bonus those calling for a remaster never could have expected.

Xenoblade Chronicles X still manages to be the best the series has looked yet, but the visual flair of this remaster shows up when and where it matters, creating the best opportunity to get involved in one of the most unique and meaningful JRPG franchises around.

The inclusion of the new Future Connected is a sweet surprise that demonstrates Monolith Soft’s commitment to its stories even when they’re not pushing hardware to new heights.

This almost-forgotten gem of a game never overstays its welcome and there’s enough content hidden around every corner to stretch the experience out for as long as possible. Once you come to grips with its slightly too many systems you’ll see that Xenoblade Chronicles: Definite Edition is a titanic JRPG with plenty of charm dusted atop its newly softened exterior.

As far as overarching narratives go, I don’t think so. Final Fantasy, Persona, and the Tales Of franchises are good picks, but they’re all typically stand-alone titles. If you like to find links in your stories, this is a good start.

Around 50-60 hours for the average player. Completionists and those who get swept up by the dizzying number of side-quests could creep up to the 100-hour mark.

Given this is both a remaster job and a whole dozen-hour story tossed into one package, it’s easily worth the asking price for JRPG fans. It’s a must-have on the Nintendo Switch for sure.