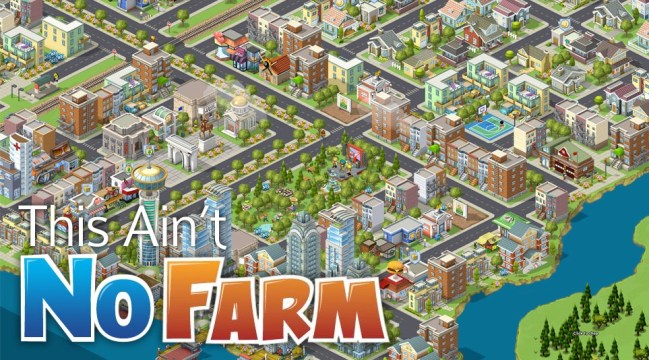 FarmVille addicts rejoice. Like so many rural folk, the pull of modern society may soon bring you to the city. Zynga has unveiled CityVille, its newest social game. Instead of building a farm, players will become a mayor of a city and build it from the ground up, a la Sim City. In the next couple weeks, beta versions of the game will be rolled out in English, French, Italian, German, and Spanish.

“Instead of harvesting crops you’re harvesting your neighborhood; instead of clearing your friend’s frontier you’re working on a friend’s franchise,” Sean Kelly, the game’s general manager, told the AFP.

The gameplay works like this: you’re a city planner and you must build roads, houses, police stations, schools, businesses, and even farms to grow your city and provide for your residents. If you fail to provide for them, your city will suffer in some way. Perhaps the roads will decay and the population will go down? Zynga points toward city hunger as an issue, though that’s a bit odd.

The big catch is social interaction. CityVille players can create their own restaurant franchises and expand them to cities their friends have built. However, Zynga’s real moneymaking plan may come from businesses that want to plant a franchise in your town. Maybe Burger King wants to open up shop in your city. It’s good advertising for Burger King and if players like the restaurant, they’d be apt to add it to their city and share it with friends. If the building comes with benefits, all the better. There will likely be buildings players will have to purchase as well. Do you want a Chrysler building in your city? It may cost you a few bucks.

Zynga’s games are immensely popular. According to the publisher, 225 million people play its games each month on sites like Facebook and Yahoo. FarmVille alone has more than 80 million users. The games are so successful that Zynga was recently valued higher than Electronic Arts, one of the world’s largest game publishers.

Are you into FarmVille, Mafia Wars, or FrontierVille? Plan to play CityVille? Seeing what could be a new Sim City-like game is quite exciting, even though it will likely disappoint fans of the classic game.

Get the bacon ready: Cook, Serve, Delicious! 2!! is coming next year

The best Chromecast deals for August 2022

The real winners of Evo 2022? Crossplay and rollback netcode

How to use Task Manager on a Chromebook