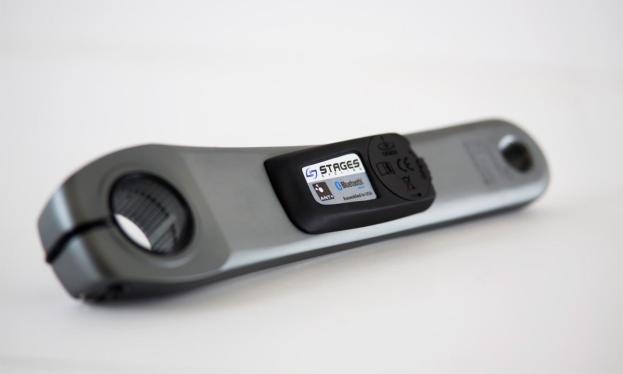 When 2012 Tour de France winning cyclist Bradley Wiggins says in a post race interview, that “someone would have to sustain 500 watts in a 20-minute climb to stay away” most cyclists understand what he’s talking about, but few know exactly what churning out 500 watts on a bike feels like. That’s because for years, the expense of cycling power meters ($1500 to $2500) have kept them mostly in the domain of professional cycling teams and a few wealthy and/or tech obsessed amateurs.

That is beginning to change, however, thanks to companies like the Boulder, Colorado-based Stages Cycling. They’re the makers of Stages Power, the “cycling power meter for every rider.” The Stages Power meters retail for between $699 to $999. And yes, in cycling, that is considered relatively cheap.

What Stages is doing with their power meter is measuring the amount of distortion (flex or shape changing) a rider causes on the left crank arm while pedaling the bike. The left crank is the arm the pedal attaches to on side opposite front gears. Stages then runs that data through some complex math before sending the power numbers out wirelessly to any bike computer that operates on the ANT+ or Bluetooth Smart communication standards. This means cyclist don’t need to buy a whole new crankset, a new bike computer, or new wheels to get power data as they would have been forced to do in the past. In fact, cyclists with an iPhone can use a fee app like Strava.com or Wahoo Fitness to analyze their power outputs.

Stages Power meters are not something that can be user installed on cranks. Stages builds them with special firmware for many of the most popular crank sets including road and mountain bike products from Shimano, SRAM, and Cannondale. And while some have criticized Stages for using only one side of the crank the company says their testing suggests that it doesn’t really matter. “We have found with thousands of miles of testing, that power differential between legs has no significant influence on ride data and its value as a training tool,” Stages says on their site. “This assumption is the tenant to our ability to keep the complexity and cost of our system lower, all the while providing power measurement with ±2% accuracy (of the left leg’s measured power).”

And, the good part, when the company comes up with new algorithms they can be updated by users wirelessly. And that means Stages accuracy will likely get better and better.

The bottom line is that a Stages Power Meter probably won’t help anyone keep up with Bradley Wiggins, or churn out 500 watts for 20 minutes on a climb, but at least they’ll know how hard they’re turning the pedals.

The best exercise tech to help you crush your 2022 fitness goals
Mirror vs. Tempo Studio: Which smart fitness mirror is for you?
The best fitness apps for the iPhone in 2022
The best fitness workout accessories for your smartphone
The Ninja Blender just got a HUGE price cut for Cyber Monday
Capstone Connected launches its smart mirrors built for all lifestyles
The best smart treadmills
This NordicTrack elliptical is $500 off — and it will arrive by Christmas!
Tonal vs. Mirror
How to change the time on a Fitbit
Withings Body Scan scales go far beyond just showing your weight
This light bulb can track your sleep and monitor your heart rate from afar
This ultraportable electric wheelchair can fold up to fit in the trunk of a car