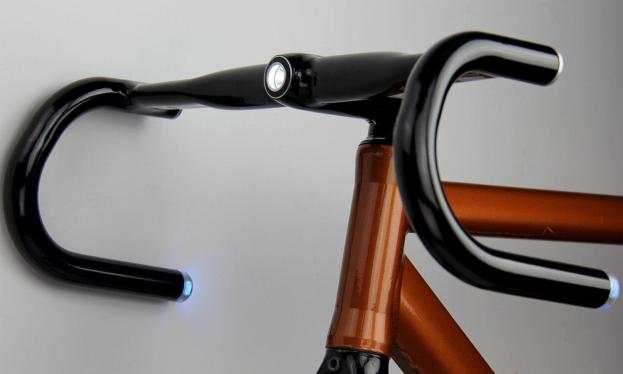 Ever ridden your bike down to the local pub, only to run into friends who want to go somewhere else, and then find yourself at closing time in a bar you never intended to visit wondering exactly where you parked your bike? Yeah, us neither. But if you worry that this might happen to you, product designer Kenneth Gibbs has a preemptive solution: the Helios bike handlebars.

The bars, which come in both bullhorn and traditional drop out designs, feature a GPS locater that allows the bike to SMS you with its current location and even (if you’re really … ahem … lost) exact directions on how to get there. But that’s just on the inside of the bars. On the front, the bars feature 500 lumens of night-blasting headlight, while on the ends additional LEDs can act as turn signals, a color-based visual speedometer, or just funky mood lighting. When paired with the Helios phone app, the lights fire up as the bike owner approaches, making it easy to find no matter how deeply it’s buried in a stack of locked bikes.

Gibbs began the project by simply trying to add lights to his bike so he’d show up better in night traffic, but one thing let to another and eventually he started work on “The Smartbike Revolution.” As with all visionary ideas, this one is on Kickstarter. Gibbs launched the fundraising effort on May 2 and has already rounded up $98,812 dollars of a $70,000 goal. The fundraising continues until June 20, 2013 and it looks like he may pass the $100,000 mark before it’s all over.

At the end of his earnest, cinematic Kickstarter video Gibbs lays out his plans for the future like a good cult leader: with a voice over, emotional music, and video of him bombing the dark streets of San Francisco on his lit up bike. “Now we’re eager to get back on the streets with a smarter bike,” Gibbs says. “And we want others to join us. We’re already looking ahead at new ways we can improve the biking experience, but for now keep your eyes out for some bright new lights. And if you’re ready to join the smartbike revolution we’ll see you out there.”

We’re pretty sure Gibbs wasn’t thinking of our hypothetical lost pub crawler when he designed Helios; nevertheless, if he can connect just one of those poor souls with their bike (which they will then responsibly walk home along the sidewalk), then he’s got our “smart bike revolution vote” all locked up.

The Ninja Blender just got a HUGE price cut for Cyber Monday
Capstone Connected launches its smart mirrors built for all lifestyles
The best smart treadmills
This NordicTrack elliptical is $500 off — and it will arrive by Christmas!
Tonal vs. Mirror
How to change the time on a Fitbit
The best exercise tech to help you crush your 2022 fitness goals
Withings Body Scan scales go far beyond just showing your weight
This light bulb can track your sleep and monitor your heart rate from afar
This ultraportable electric wheelchair can fold up to fit in the trunk of a car
Ouch! Amagami Ham Ham bit my finger
How taking your blood pressure is about to be as easy as taking your heart rate
Forget waiting! Here’s all the CES 2022 tech you can buy right now