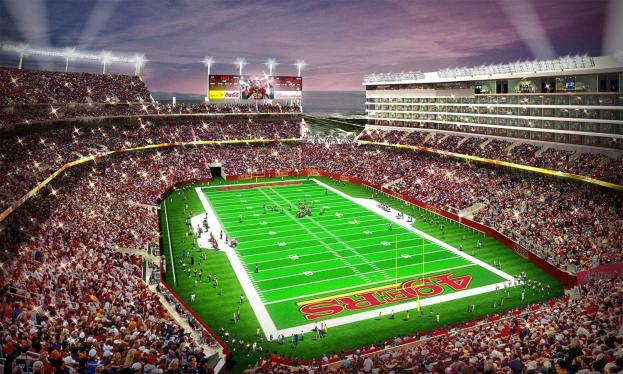 Levi’s Stadium, the future home of the San Francisco 49ers set to open in 2014, is coming along nicely.

Once it does, the hope is to create a smarter, more connected place for fans to experience the game. “We want to be a software-driven stadium,” 49ers owner Jed York said Thursday on the final day of the All Things Digital Conferences in Rancho Palos Verdes, Calif. Taking the stage last week with Sony CEO Kaz Hirai, the two pledged to provide fans a tech experience well beyond the norm.

Sony will outfit the stadium with much of its technological infrastructure, including 4K televisions and cameras, with screens promising four times the resolution of that HD screen you just had mounted on your wall – enough to end any debate as to whether that receiver got both feet in bounds. From there, the in-stadium fan will have options through smartphones and tablets to tailor his experience, perhaps following an individual player or asking for a camera view (show me the linebackers!) not offered on broadcast TV or the big board. York envisions fans able to order concessions from their seats or find the best places to park. This in addition to keeping up with action around the league, no small consideration given the importance of fantasy football for today’s NFL consumer.

For Sony, there will be potentially endless branding opportunities, not just with TV’s but perhaps the ability for fans to rent its Xperia smartphones and tablets inside the venue.

San Francisans are long accustomed to high-tech amenities at their stadiums. AT&T Park, home of baseball’s Giants, has long been considered one of the country’s most forward-thinking in that regard. In fact, Giants fans are often mocked for doing everything at a game but watching what happens on the field. For the Niners, creating a space in step with technological times is not a question of simply selling tickets – the Niners have routinely filled to capacity an old, uncomfortable Candlestick Park, which is ranked by fans as among the worst stadiums in sports. They made the Super Bowl last season and are well positioned to contend for years. To coin a phrase, even if they didn’t build it, people are coming anyway.

Still, fans have an ever-increasing number of options on where to spend their entertainment dollars. By making sure their venue has new technology that can improve the game-watching experience in ways that even a fancy home theater setup cannot, the 49ers are investing in a time when the team might not be so strong – like the 18 years between their last two conference championships.

The Ninja Blender just got a HUGE price cut for Cyber Monday
Capstone Connected launches its smart mirrors built for all lifestyles
The best smart treadmills
This NordicTrack elliptical is $500 off — and it will arrive by Christmas!
Tonal vs. Mirror
How to change the time on a Fitbit
The best exercise tech to help you crush your 2022 fitness goals
Withings Body Scan scales go far beyond just showing your weight
This light bulb can track your sleep and monitor your heart rate from afar
This ultraportable electric wheelchair can fold up to fit in the trunk of a car
Ouch! Amagami Ham Ham bit my finger
How taking your blood pressure is about to be as easy as taking your heart rate
Forget waiting! Here’s all the CES 2022 tech you can buy right now