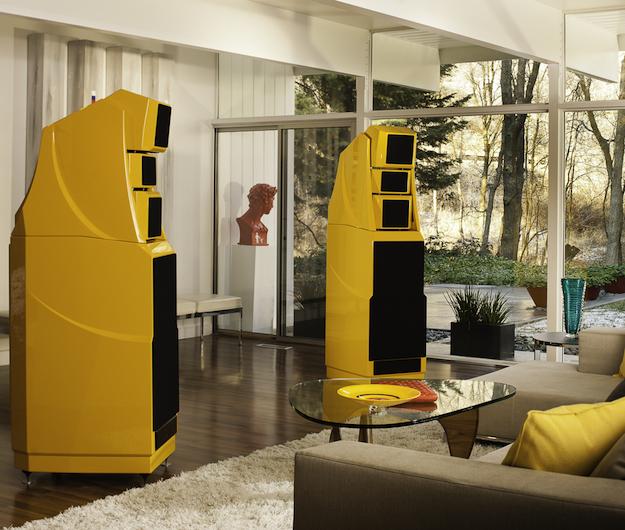 Not everyone is happy to have a massive pair of floor-standing speakers dominate their living room in the pursuit of audio nirvana, and convincing an uncooperative partner that it’s a sacrifice that needs to be made is a difficult one. Speaker manufacturers understand this could be a problem, and many make beautifully designed, subtle speaker systems that will please both parties.

Wilson Audio, however, has done no such thing with its newest speaker, the Alexandria XLF. Announced at the tail end of 2011, the XLFs are a continuation of the company’s Series 2 speakers, just larger and with 14-percent more bass.

The huge enclosures are best described as man-sized, as they stand 178 cm (70-inches) tall and weigh an astonishing 297 kilos (655 pounds) each. Pull off the covers are the reason for this massive weight becomes obvious. There are two woofers — one 13-inch and one 15-inch — two 7-inch midrange drivers, a 1-inch tweeter and finally, a 1-inch super tweeter.

Billed as the “world’s best speaker” by Wilson Audio, who could be biased, the Alexandria XLFs are the brainchild of Dave Wilson, founder of Utah-based company, which has made quite a name for itself amongst audiophiles over the years.

The workmanship and attention to detail that has gone into making the XLFs is incredible, from designing an entirely new tweeter when off-the-shelf products weren’t cutting it, to spending a week’s worth of 8-hour shifts just to mill the pieces needed to form a single channel. The name comes from the inclusion of a Cross Load Firing port, where either a forward or rear-firing bass port can be selected to tune the speakers to their environment.

It’s the design that will split opinion though, as no matter how perfectly tuned that segmented cabinet may be, it’s not the most attractive we’ve seen.

The Alexandria XLF speakers are made to order, so any color can be specified to match your room’s decor, and — brace yourselves — a pair costs $200,000. That’s before you’ve spent any money on an amp man enough to drive them, too. They’ve been available in the US since late March, and made their European debut this week.

Sonos One speakers are getting a new splash of color later this year
Build your dream Dolby Atmos setup with Klipsch’s new R-26FA and R-14SA speakers
Focal’s new Sib Evo speakers make it easy to dive into Dolby Atmos
Pyle’s 1,000-Watt Street Blaster X is a Bluetooth speaker on steroids
What’s new on Disney+ in October 2022
The ‘streaming wars’ aren’t what you think
Google Chromecast tips and tricks to make you a master caster
How to set up a Google Chromecast to get streaming fast
How to clean your TV screen
How to share a Spotify playlist
How to watch the DC movies in order
Thursday Night Football streaming issues ‘going to be less and less a thing’
Grab this LG 55-inch OLED TV deal from Walmart and save $400