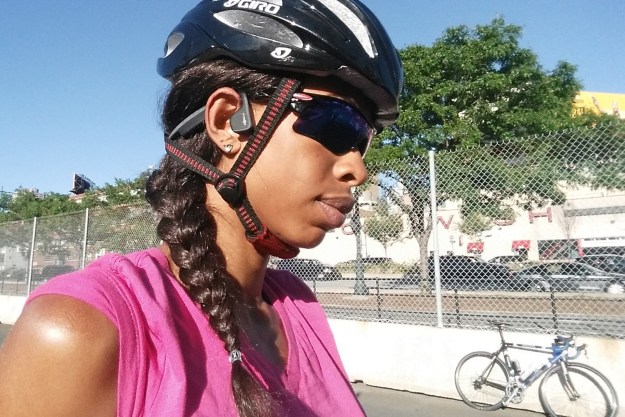 “Weathering both salty sweat and the daily gym-bag battering, Trekz Titaniums are perfect for fitness.”

When I have to go somewhere, I prefer to do it by bike. I also like my tunes; a good beat helps keep my pedaling cadence steady. But headphones drown out the world around me, and hearing that car engine as it revs behind me could save my life. Aftershokz addressed traditional headphone’s lack of situational awareness with the Trekz Trekz Titanium AS600 bone-conducting headphones: They sit on your cheek bones in front of your ears and conduct sound through the bone rather than your ear canal.

Compared to ear-buds, bone-conducting headphones don’t block noises from the outside world, so you can hear that pedestrian yell “look out!” or the tire-squeal on your six as a driver tries to beat you into the turn. Bone conducting headphones are great for folks who like to exercise outside, and fit any situation where you want to have personal sound but still hear what’s going on around you. The Trekz Titaniums offer all that and more, in a tough, water-resistant package that makes them perfect for fitness.

The Trekz Titanium headphones come in a clear, hard box, not one of those vacuum sealed struggle-fests that you need scissors to open. Inside there’s a leatherette, zip-close, semi-hard case for storage, which was a nice touch, along with the micro USB charging cable, band adapters to fit smaller heads, earplugs to block outside sound, a user guide, and a warranty card.

Luckily, Trekz Titaniums themselves don’t seem like they’ll ever need that warranty card. The headphones are named for the band of titanium alloy that connects the two transducers. It’s surrounded with a water resistant polymer to keep out inevitable sweat. The transducers themselves are firmly constructed — substantial feeling but not heavy, with good, tight seams — which is as it should be for headphones at this price.

Aftershokz Trekz Titanium AS600’s have three buttons: Power and volume up (the same button) and volume down are on the underside of the device behind the right ear along with the micro USB charging port, while the larger and easier to reach multifunction button sits on the outside of the left transducer.

Hold the power button for five seconds to enter pairing mode and connect to devices using Bluetooth 4.1. Connecting with my Galaxy S5 is a breeze; not so much with my older HP Touchsmart laptop or my PS4. It would have been nice to use a PS4 headset that didn’t plug in to the controller, or to be able to listen to music on my computer while keeping an ear open for the phone in the next room, but the Titaniums are for sports, not sitting around.  Aftershokz makes the Gamez headphones for that.

The multifunction button controls most common actions, like answering calls and skipping tracks – unfortunately, these don’t support “previous track” selection. That’s a little annoying in this modern age, and seems an overlooked feature. I had a pair of JVC wired earbuds that could do “previous track” with three taps to the main button, bought for less than $20 in Chinatown. I was expecting at least that function from $130 headphones.

The volume control buttons handle the more advanced stuff, like changing the equalizer or checking the battery status.  A beep or two will sound to confirm the action, or Audrey (the Aftershokz voice prompt system) will confirm aloud. For instance, Audrey says “Equalization changed” when switching between the two equalizer settings — in case you missed the drastic switch in sound from bass-heavy to treble.

The one annoying thing Audrey didn’t note was that the Trekz Titaniums automatically activate my phone’s Driving Mode when connected. Even when I turned Driving Mode off via the notification panel, it would turn on again automatically if I used another app and sent the screen to sleep. In Driving Mode, the phone automatically replies to incoming calls and texts with a busy message, so it annoyed the person calling, and being unable to turn it off reliably annoyed me. It’s a safe but thoroughly inconvenient feature. If I turn something off once, it should stay off.

It’s worth noting that fit might be an issue for some. Headphones that sit over the ear and wrap around the back of a cyclist’s neck have to contend with the helmet straps as well as glasses. The literature suggests putting on the headphones first before working everything else out, but sadly Aftershokz’s pictures and the reality of the device don’t align with that.

Depending on the shape of your head, the Titaniums might be more comfortably worn over helmet straps, which means you need to pull them off before you take off your helmet (unlike earbuds). Further, the order of important gear for a cyclist riding with traffic is definitely helmet first, then glasses, then headphones – headphones do not come first.

But back to fit: People with smaller heads can slide on the little “fitbands” that come with the headphones, or they can size down and grab the new Trekz Titanium Minis. Those with larger heads might have a tough time.

In my case, after about an hour or so the pressure from the Trekz Titanium started to give me a headache. Part of this was due to playing them on high volume. When I turned the volume down on my next run it took about two hours for the pain to make me pull them down around my neck or turn them upside down to move the pressure point. After a few days, I did get used to it, but it was unpleasant riding for a while. Aftershokz has a measurement system online so buyers can estimate the fit, but there’s still only Mini and the regular Titanium. My head measures about eight and a half inches from behind one ear to the other, which puts my head firmly in the “regular” Titanium camp.

In my case the headphones were tight on my head, but drooped at the back of my neck if I didn’t position them on my helmet or hair. It’s enough space to allow for a low ponytail, though the design is best for those with short hair. If you have long hair but wear it up while exercising then the Trekz Titaniums will fit fine, but the fixed band lacked versatility. These headphones take some figuring out, while most earbuds just pop in your ear.

On the upside, they didn’t slip and slide when my face started to sweat – not a problem for me until temps really started to climb this summer.

Sounds Good, Can You Hear Me Now?

Despite being non-traditional, the sound quality was clear, and even rich to the point of bordering on bass-heavy. The basic equalizer was a nice touch to tone down some tracks, since the vibration of hours of hardcore gym-tunes will no doubt lead to a headache.

Weathering both salty sweat and the daily gym-bag battering, Trekz Titaniums are perfect for fitness.

Through a few weeks of testing, I never had a problem hearing my music, even on New York City’s crammed streets, where cars are bumper to bumper and construction crews are busy at work – though at high volumes people standing next to me could hear my music too. The volume range is great: When it’s loud you can still hear the world around you, when it’s low you can still hear your music even though it’s not actually in your ear.

The same quality was apparent in the mic. I never had to repeat myself during phone calls, as I’ve often had to do with my earbuds. The position of the mic on most wired earbuds puts it too far from the mouth so that a little wind drowns out your voice. At extreme speeds (25 mph) the wind may overwhelm the Titanium’s mic, but those are the moments to put on the brakes and talk, or get off the phone and fly.

For a Long, Happy Battery Life, Plan Ahead

One more reason to just hang up and ride is the battery life. The company claim of six hours is pretty accurate, but that’s not long enough to get through a full day’s ride. That said if using the Trekz Titanium to commute you can always charge it at work, assuming you have outlet access. If not, bring a portable battery.

When you do turn it off, do remember to turn off Bluetooth on your phone unless you need it for something else. The additional drain on my battery from using Bluetooth compared to wired headphones was negligible, but leaving Bluetooth on with nothing connected will drain a battery unnecessarily. Again, I recommend a portable battery bank to get you through longer days.

Once at home base, the Titanium battery charged up in record time – again, the Aftershokz estimate was dead on at about an hour and a half.

Register the product online and get a limited two year warranty if you buy the Titanium through sellers authorized by Aftershokz. The company requires proof of purchase and the serial number from the included warranty card.

Thumbs up for a really good mic, and for eliminating the problems that persist with wired headphones – no cord to get caught and rip out is always worth a mention with sport headphones. But the Trekz Titanium AS600’s aren’t easy to store without the case – they don’t fit easily in a pocket like earbuds, so it’s a good thing the construction is hearty.

They may be a little tight on the dome, but that keeps them from slipping, and over time I did get used to it. I can’t say bone-conducting headphones are as effortless to use as earbuds, but these were never yanked off when the cord caught on something. Nor did I lose one earbud, as is my constant terror when using totally wireless buds.

The sound isn’t as amazing as my Bose over-ear Quiet Comfort headphones, of course. But then again, I’m afraid to take those out of the house. The Trekz aren’t intended to be studio monitors anyway; they’re designed for working out and preserving situational awareness. Aftershokz Trekz Titaniums do both admirably, weathering both salty sweat from long rides and the daily gym-bag battering that goes along with an active lifestyle.

If you exercise where being able to hear the world around you is a must, Trekz Titaniums are an excellent option.

Topics
Video-editing app LumaFusion to get a Galaxy Tab S8 launch
Rode’s NTH-100M headphones are built for gamers
Sony’s 2023 AV receivers are Sonos-ready and work with wireless speakers
Netflix expands its spatial audio, number of devices that can download content
Best 75-inch TV deals: Get a large screen for the Super Bowl
YouTube TV: plans, pricing, channels, how to cancel, and more
Apple’s MLS Season Pass is about more than just streaming games
Flash sale drops the price of this 55-inch QLED 4K TV to just $370
The best movies on Disney+ right now (February 2023)
Perfect for the Super Bowl, Samsung’s Frame TV is $1000 off
Save 40% on Peacock Premium when you subscribe today
How to watch Super Bowl 2023
The best movies on Hulu right now (February 2023)