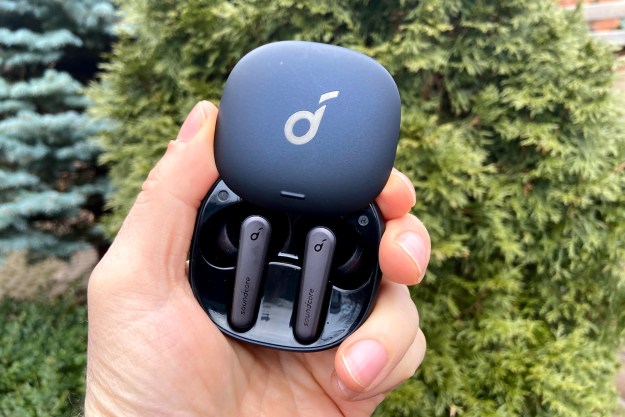 Much to the surprise of seasoned audio reviewers, Anker Soundcore has emerged from the depths of Amazon’s brand basement to become a producer of great-sounding wireless headphones, Bluetooth speakers, and true wireless earbuds. In 2020, Digital Trends reviewed the $110 Soundcore Liberty 2 Pro and heaped praise on their wide soundstage and overall sound quality, despite some concerns around the buds’ overall design.

Now, Soundcore is back and has its sights set on nothing less than dethroning Apple’s $249 AirPods Pro with the $130 Liberty Air 2 Pro, the company’s first true wireless earbuds to offer active noise cancellation (ANC). Can Soundcore deliver on the same feature set as Apple, for almost $120 less? Let’s take a look.

Anker Soundcore continues to use way too much packaging for its true wireless earbuds. The Liberty Air 2 Pro come inside a glossy, print-wrapped, book-style cardboard box that uses magnets to keep the lid closed. Inside is a lot of plastic and foam surrounding the important bits: The earbuds, their charging case, a USB-C charging cable, and some documentation. But as much as I dislike all of that unnecessary material, I have to give Soundcore props for including nine sets of silicone eartips. Getting a good fit is crucial for comfort, sound quality, and noise cancellation, and a variety of eartip sizes is the key to a good fit.

The Liberty Air 2 Pro, which come in your choice of four colors (black, blue, pink, and white), certainly look a bit like the AirPods Pro. That’s mostly because of the elongated stem that protrudes downward from your ear. But they bear an even closer resemblance to Earfun’s $80 Air Pro, and the $100 Edifier TWS NB2. All three use an ergonomically shaped main body that sits inside your outer ear, a silicone-tipped horn that enters your ear canal, and a distinct stem.

It’s the only case design I’ve tried that can be effortlessly opened and closed one-handed.

Whether you like that AirPods-inspired shape or not is a matter of personal preference, but I think they look pretty good.

What I like most about the Liberty Air 2 Pro’s design is the wireless charging case. It’s light and relatively compact — though nowhere near as tiny as the case for the AirPods Pro — and features the same slick sliding lid mechanism as the Liberty 2 Pro. It’s the only case design I’ve tried that can be effortlessly opened and closed one-handed.

The earbuds snap into their charging sockets easily and accurately, and they can be removed just as easily — something that isn’t always the case.

I can’t say if the sliding lid will be as rugged over the long term as a traditional hinge, but it feels very sturdy out of the box, which is a good sign.

The Liberty Air 2 Pro are very comfortable. I was able to find an eartip size (thanks to the big selection) that provided a very good seal, which also helped to keep the earbuds securely seated. I’ve found that stem-style earbuds tend to feel less ear-filling than stemless designs, and this is also true of the Liberty Air 2 Pro.

Soundcore includes a small feedback tone for taps — this should be standard practice for all touch-based earbuds.

However, the stems on these earbuds are longer than the AirPods Pro and, for me, that meant they ended up making contact with the side of my face. While not a comfort problem per se, it did mean that the act of talking would gradually loosen the fit, so I had to adjust them more often.

The Liberty Air 2 Pro use touch sensors on either earbud to control major functions. I prefer physical buttons, but I found the sensors were adequately sensitive and almost always recognized my taps. I really appreciate that Soundcore included a small feedback tone to let you know when those taps have been successfully recognized — this should be standard practice for all touch-based earbuds.

You can customize what the touch controls do using the Soundcore app, but you have to prioritize which functions matter most because only four commands can be assigned. Double taps and long presses can be given control over volume, play/pause, track skip forward/back, voice assistant access, and ANC mode, but there just aren’t enough gestures to let you use them all. Thankfully, you can assign either of these to govern the switch between ANC and transparency modes without having to cycle through the third “no ANC” (normal) mode as so many other earbuds require.

Thanks to onboard wear sensors, the music will auto-pause and resume when you remove and replace an earbud. This worked flawlessly.

The Liberty Air 2 Pro sound really good. They offer a strong bass response, a nicely balanced midrange, and highs that are clear and never sibilant. Impressively, the bass isn’t just all boom — tracks like Hans Zimmer’s Time reveal warmth as well as subtlety while providing the deep resonance you need to appreciate low-end complexity. Even better, that low end doesn’t trample the vocals. Billie Eilish’s Bad Guy, a song that is a torture chamber for a headphone’s ability to separate lows and highs, comes across beautifully, with Eilish’s whispers eliciting ASMR-like tickles while the insistent thrumming bass beat stays anchored to the floor.

The Soundcore app lets you tweak the EQ using a huge number of genre-based presets, plus you can save your own custom EQ settings. The app also gives you the ability to engage the HearID listening profile system, which is designed to compensate for any frequency loss you might have. I didn’t find that it improved my enjoyment of the sound, so I kept it turned off.

The Liberty Air 2 Pro are doing more than simply blocking outside sounds.

ANC performance on the Liberty Air 2 Pro is solid. It effectively canceled out the most intrusive outdoor sounds like traffic and construction, which let me hear podcast voices without needing to turn up the volume. Unlike some cheaper ANC earbuds, there’s a pronounced difference between ANC-on and ANC-off, which shows that the Liberty Air 2 Pro are doing more than simply blocking outside sounds.

Within the Soundcore app, you can engage four different ANC modes: Transport, Indoor, Outdoor, or Custom — each with its own emphasis on different frequencies. The transparency setting has two modes: Fully Transparent and Vocal Mode.

I like the amount of choice this gives you, but I have a feeling most folks will simply choose Transport and Fully Transparent, as these offer the most noticeable differences.

Fully transparent mode lets a good amount of sound in, but it’s not quite as clear as what you’ll find on more expensive ANC earbuds like the Jabra Elite 75t or 85t, or the AirPods Pro.

Soundcore claims a six-hour battery life when using ANC, and seven hours when it’s off. The charging case brings these numbers up to 21 and 26 hours, respectively. I didn’t run the Liberty Air 2 Pro all of the way through these cycles, but after every listening session, I checked the Soundcore app’s battery readout and it appeared to be right on track with these claims.

These numbers are OK but not exceptional. The AirPods Pro may not last as long on a single charge (4.5 hours with ANC), but their case extends that time to almost 24 hours.

Fast-charging is just fine, with 15 minutes in the case extending play time by three hours.

Call quality on the Liberty Air 2 Pro is something of a mixed bag. The noise suppression on the six microphones is impressive. Passing cars and even loud trucks were rendered almost totally undetectable, and wind noise — often a challenge for earbuds — was handled perfectly. But this same noise suppression has a tendency to muffle your voice, too, especially when those other sounds are present.

You’ll still be able to make yourself heard, but it’s rarely a crystal clear experience for your callers.

Being able to hear yourself on a call while using Transparency Mode is great, but unlike with the AirPods Pro, you’ll have to engage transparency before making or receiving a call — there’s no way to switch once you’re on a call.

If you’re looking for a great set of noise-canceling true wireless earbuds, it’s hard to beat the Soundcore Liberty Air 2 Pro at this price, but the two models that come closest are the $80 Earfun Air Pro and the $100 Edifier TWS NB2.

The Soundcore Liberty Air 2 Pro come with an 18-month warranty and lifetime tech support, which is better than the industry average. They appear to be very well built, so I expect they’ll endure constant use just as well as many similar models at this price. The sliding lid on the charging case could be a weak point over time, but so far, I’ve seen no complaints about the Liberty 2 Pro, which use an identical design.