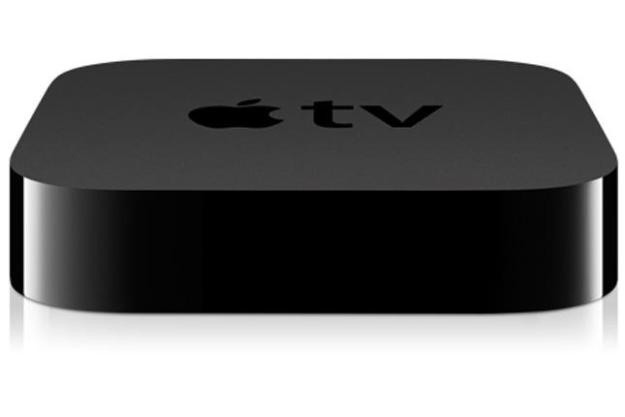 “Short of AirPlay and an idiot-proof interface, the current Apple TV offers little that can’t be found elsewhere, and lacks plenty that can.”

After Walter Isaacson’s Steve Jobs biography got fans hyperventilating for an Apple-branded television last fall, the winter announcement of a lightly refreshed Apple TV may have come as a letdown. Still physically identical to its predecessor, the beefed-up 2012 Apple TV now plays 1080p video and offers an even further streamlined interface, plus AirPlay. But does it warrant an upgrade for existing Apple TV users, and does it compete with the likes of the Boxee Box and Roku? We took a closer look to find out.

If you’re not already familiar with the miniaturized black Apple TV that came out back in 2010, check out our review of the original device for a primer. So little has changed that we won’t don’t want to rehash too much, but here’s the executive summary: We liked the incredibly small, sleek and quiet design of the original, but the amount of content it delivered was lacking unless you wanted to dig yourself into a nice deep credit card bill with iTunes purchases. It was, first and foremost, a storefront for Apple.

Not that much has changed. The biggest news for videophiles will be an update from 720p to 1080p output resolution. Considering many cheaper devices like Roku were already offering that functionality back in 2010, it’s a long overdue update to the industry standard. Perhaps less overdue thanks to the supreme ease of use on the original, Apple has also massaged the user interface to something that will make iOS users feel right at home. Finally, the new Apple TV also supports AirPlay, which makes it easy to connect with other Apple devices — like an iPad or iPhone — and share content like photos, videos and music.

Getting up to speed on the new Apple TV is no more complicated than with the old model. Plug in the power, plug in the HDMI, and you’re good to go. We criticized the original Apple TV for its lack of component or composite video output, which (not surprisingly) remains the case here. We’ll concede this: If your TV still doesn’t have HDMI input, put your next $100 toward a new TV, not an Apple TV. But it still limits who can use this device, and where. The lack of analog audio output (you just get an optical digital jack) will still frustrate owners of legacy receivers, too.

The slim aluminum remote that comes bundled with the Apple TV hasn’t changed, either: You basically get a directional pad with center select button, a menu button, and a play-pause button. It’s impossible to really get confused, but the lack of inputs also makes it incredibly cumbersome to enter text, compared to a remote with a QWERTY keyboard like the one that comes with the Boxee Box, or even some of Samsung’s flagship TVs. You’ll learn this as soon as it asks you to enter your Wi-Fi password on setup (provided you’ve chosen not to opt for a hard-wired Ethernet connection).

The reliance on old-school infrared transmission also means you need a direct line of sight with your Apple TV, so you’ll need to keep it where you can see it from the couch. Considering both Roku and Boxee have both moved on to more trouble-free RF technology, we almost wonder whether this one just boils down to classic Apple vanity. Why allow customers to hide your world-class industrial design away in an entertainment cabinet when you can force them to keep it on display?

The real changes crop up after you get past setup to the main menu screen. The Apple TV team has obviously been taking some hints from iOS, because all the options have now been neatly sorted into a grid of round-edged, app-like icons. These fill up the lower half of the screen, while the top presents a peek at what’s inside each category: movies, TV shows or music, as the case may be. Navigating down past the top row of icons slides the top panel away to show just the grid. Here, your TV really starts to look like a 42-inch iPad.

The redesign goes more than skin deep, but the app style dissolves once you start sifting through content, where titles are typically sorted into horizontal strips across the screen — one for action thrillers and one for romance, for example. At some points where it shows categories arranged into a column on the right side of the screen, the left is used to parade titles across the screen in a smooth CoverFlow style, giving examples of what might lie within a category. This graphic-heavy design gives Apple TV the fluid, effortless look and feel that Apple is known for.

Unfortunately, it also seems to slow the box down a bit. Cracking open a new section of the iTunes store sometimes took 10 seconds or so, and in almost every case, not all the box art loaded in time. Scrolling down too rapidly produces row after row of placeholder images. We’ve run into similar problems with the Boxee Box, and the Xbox 360 definitely takes longer to load an app like Netflix, but it’s worth noting that Apple’s design wizards haven’t forged any magic bullets for their own box.

One of our biggest complaints about the last Apple TV was simply that it herded you into iTunes and shut the door. If you didn’t want to buy movies from iTunes or stream them from Netflix, there weren’t many options.

If it seems like there’s a trend there, let us draw it out for you: With the exception of Netflix, anything that would cannibalize business from the iTunes store is missing. No Hulu Plus. No Vudu. No Amazon Instant Video. No Spotify or Pandora.

Don’t act so surprised. This is Apple. But unless you’re an Apple investor, that doesn’t leave you, the consumer, in much better shape. You’re essentially left to watch ancient programming on Netflix or shell out $2 a show for it in iTunes.

Like most other set-top boxes, the Apple TV can also stream videos, music and movies located on a computer or NAS for playback on a TV. Unlike many other boxes, you need to use iTunes Home Share to deliver them, not DLNA, which means downloading some of the shoddiest multimedia software you’ll ever involuntarily install on your Mac or PC. Because Apple TV requires the relatively recent (iTunes 10.2 and up) “Home Share” feature, not the standard iTunes server, older NAS boxes and other hardware that claim to support iTunes won’t work, either. That typically means leaving a computer on running iTunes 24/7 to ensure access to your photos, videos and music, and you’ll be capped at only five “authorized” computers per account.

Besides the 1080p output and the shiny new interface, AirPlay might actually sound like kind of a lame feature. On the surface, it’s just another way to share content, stamped with an Apple trade name. But there’s real power here: wireless screen mirroring. Anything you can pull up on your iPhone, iPod or iPad, you can pull up on the Apple TV. Effortlessly.

Setting up screen mirroring on a iOS device is as simple as double clicking the home button, scrolling throough the “current apps” list to the left, and enabling it with the click of an icon. As long as you’re on the same network, the Apple TV instantly switches to the live screen view, no input on the box needed. Hey, there’s a reason Apple fans buy only Apple.

The implications here go much deeper: As long as you have an iOS device handy, you have access to more than 700,000 apps on your TV. Skype? Why not. Angry Birds? Sure. Anything you can open in Safari is fair game, too. And Pandora, which Apple excluded from the box, is accessible through AirPlay.

Of course, true screen “mirroring” means that while the box that shows content is bigger than the screen on your device, neither the aspect ratio or resolution adapt to the screen. You’ll have black bars around the screen and nothing will look as sharp as it could on a 1080p display — the exception being video playback, which breaks the true “mirroring” to show playback on the screen and a placeholder graphic on the iPad or iPhone. A lag time of about a second will also dampen any ideas of gaming using the device as a controller and the TV as a display.

If you’re already a loyal iTunes customer and you want to gorge yourself on content without a worry for what it costs, get an Apple TV. If you want to use any of a myriad of other services like Pandora, Hulu Plus or Amazon Instant Video, get the cheaper, more capable Roku 2 XD. Or splurge on the Boxee Box.

Short of AirPlay and an idiot-proof interface, the current Apple TV offers little that can’t be found elsewhere, and lacks plenty that can. The Apple TV locks consumers in a padded white cell and replaces the key with a credit card swiper. All but the most dedicated Apple addicts will chafe at the limitations of a box that insists on closing doors while the rest of world is trying to open them.

With Thor: Love and Thunder, Natalie Portman is finally the superhero

These coding languages will land you the best-paying jobs