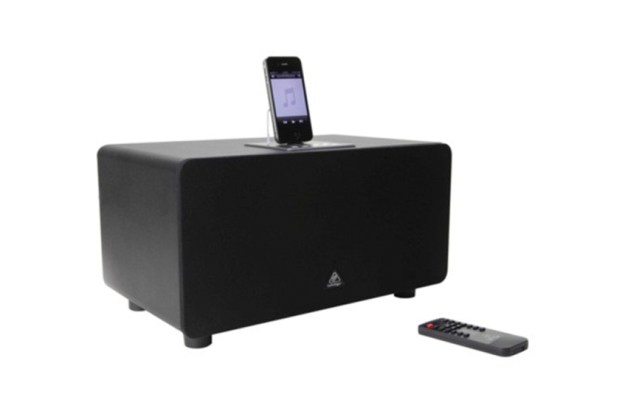 “If you’re looking for a blast of sound that will easily fill a room on a budget, the Behringer iNuke Boom Junior is definitely worth a listen.”

Last December, we told you about the iNuke Boom, a 10,000-watt, 8 x 4-foot monstrosity created by pro-audio electronics company Behringer to play your favorite new “K-Pop” track at skull crushing volumes. Showcased at CES 2012 in January, this hydrogen bomb of an iPod dock weighs in at 900 lbs (200 lbs more than Behringer’s original estimate), and has a price tag of around $30,000. Who in the world needs such a thing? Behringer says the iNuke Boom is, “…the ideal gift for the man or woman who has everything.”

While a review of the iNuke Boom is impractical (just imagine the shipping charges!), Behringer was kind enough to send us the iNuke Boom’s baby, baby, brother, the iNuke Boom Junior (iNuke Jr). At one twenty third the size of the original iNuke Boom and a cost of around $140 online, “Junior” seems like a bit of an understatement – how about micro, or super-mini? Adjectives aside, we were eager to hear what a namesake with such an extraordinary lineage might sound like. Here’s what we found.

Though only a fraction of the gargantuan iNuke Boom’s size, the iNuke Jr. weighs a respectable 10.6 pounds. Under the hood, the Jr. packs a decent payload of speakers, including two 1-inch tweeters, two 3-inch midrange drivers, and a 5.25-inch sub which faces down from the bottom of the cabinet (perfectly positioned to upset your downstairs neighbors).

In the box with the dock, we found a small remote control (lithium battery included), an RCA stereo cable, a stereo mini-jack cable, and the power supply. There is an S-video output to feed video to those TVs equipped with the now antiquated connection, but no S-video cable is included. Also included is a transparent rectangular backstop to hold your iDevice in place, which lights-up when a device is connected.

Most of the features of the iNuke Boom Junior are easily (and only) accessible by the remote, including category scrolling, pause/play, skip, treble, bass, and volume control. Unfortunately for you iPhone 5 users, the iNuke Jr. uses the original Apple 30-pin input, so you’ll need to take your chances with a Lightning adapter or connect via the available line-in or aux inputs, then control the device manually. Also, many of the iTunes navigation features are only compatible with the first-gen iPad. Because of these limitations, we were a little disappointed to find the iNuke Jr. doesn’t follow-suit with the original iNuke Boom and incorporate Bluetooth wireless connectivity, which would solve those remote control issues for newer Apple devices.

We found out early in our evaluation that the plus and minus buttons which control bass, treble, and volume are inconveniently ordered: Bass and treble are at the bottom, and volume is sandwiched right below the navigation controls. The three sets of buttons are identical in size and our thumb kept fumbling at them when searching for volume, usually adjusting treble or bass instead. We wish the volume controls were set apart from the rest for easy access, especially considering how loud the iNuke Jr. can get! That’s just basic remote control design 101, folks. Aside from that, navigation of our iPhone 3GS went well, and we were able to move from song to song with relative ease.

With words like “Nuke” and “Boom” in the title, we figured the first thing we wanted to hear was something with some serious low end, so our first test tracks came straight from our hip-hop catalog. We put on what has become one of our go-to test albums, Too Short’s “Get-in Where You Fit-in,” cranked up the bass to 10 and let it rip. We were not disappointed – in fact, we soon started looking out the window to check for neighbors at the front door. The bass was full, deep, and loud as it refracted off the walls and filled the room. The treble on this track was clean and clear, with no distortion, and the overall sound was impressive.

We were less impressed, however, at our first listen to some acoustic-based rock tracks. Percussion (especially hi-hat and tambourine) came off particularly brittle, and midrange response was weak. We decided to give the speakers some break-in time to see if that would round off the harsh treble and remedy the midrange suck-out we were experiencing.

After roughly 10 hours of break-in time, we returned to notice the treble had calmed-down considerably, allowing the midrange to come into better balance in the mix. When we played Ray LaMontagne’s album “God Willing, and the Creek Don’t Rise” (a rather dark-sounding production) we were amazed at how beautifully it was reproduced by the iNuke Jr. The album’s pedal-steel guitar glided around with soothing fluidity, acoustic guitars were thick and well defined, and vocals were upfront and in perfect balance throughout the album. Bass was restrained, and yet fully realized with striking richness. We noticed similar balance and rich tone when we sampled other country-inspired tracks from artists like Ryan Adams and Willie Nelson.

As we scrolled through the many different genres of music on our iPhone, the iNuke Jr had some hit-or-miss moments. As we said before, the dock shines on hip-hop tracks, and we found it did pretty well when we tested electronic-based music like Beck and DJ Shadow, too. The iNuke Jr. also handled rock tracks from bands like Pearl Jam and Spoon with full midrange and good low-end depth – electric guitars had an especially powerful punch. Brighter productions, however, like Ben Folds’ “Philosophy,” or older Elton John tunes, were either too bassy or too crispy. For instance, the audience sound-effects on “Benny and the Jets” sounded more like rain on a tin roof than a crowd at a show.

With reams of bass, and extreme volume capabilities without distortion, the iNuke Boom Junior makes a potent addition to the glut of iPod and iPhone docks available today. Though it won’t replace a more refined hi-fi system, the iNuke does offer some considerable bang for your buck, and we think many folks may find it fills their basic sound system needs, especially for those with smaller homes or basement rec-rooms. We’d like to hear more midrange presence in general, and there were times when we were put off by brittle treble, but with that said, there were moments when what we heard from the iNuke Boom Junior was downright remarkable. If you’re looking for a blast of sound that will easily fill a room on a budget, the Behringer iNuke Boom Junior is definitely worth a listen.