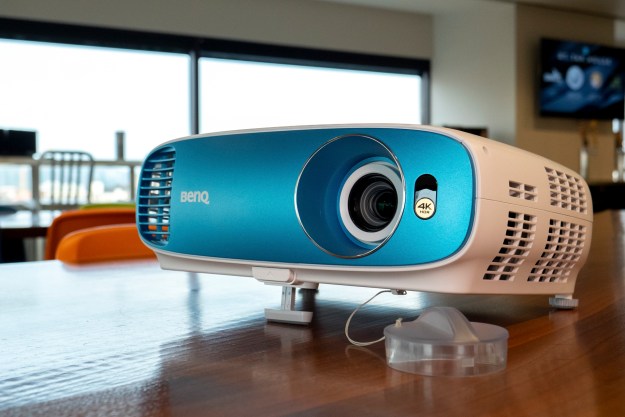 “If you’re after a bright, beautiful projector, BenQ’s TK800 is a fantastic option.”

We’ve seen the price of near-cinema quality projectors dip considerably in recent years, affording those of us without astronomical budgets the opportunity to transform our living rooms into ticketless theaters, all for around the same price as a high-end TV. But most living rooms still lack one thing: complete darkness. The strong backlighting systems inside the best modern TVs are significantly better at competing with ambient light than the vast majority of projectors, and that makes many projectors a deal breaker without oodles of curtains or a windowless room to place them in.

Not so with the BenQ TK800. With 3,000 lumens of brightness, the TK800 may not be viewable in direct sunlight, but it deals with ambient light significantly better than similar 4K projectors — like the BenQ HT2550 we reviewed in March. With the same $1,500 price as the HT2550, the same great color accuracy, and the ability to work well outside of complete darkness, we think the new TK800 is a slam dunk … one we’d seriously consider if we were building out a home cinema.

The TK800 comes in an easy to transport box with a carrying handle, power cable, and backlit remote control and batteries — nice for adjusting controls in dark rooms.

Though the small, white projector has identical rounded looks similar to the HT2550 model, the first thing that you’ll notice about the BenQ TK800 is that it has a prettier blue front than more understated grey on the HT2550. Most people won’t be buying their projector based on looks, but we do think the TK800 is good looking, as far as that goes.

The TK800 has a vast array of connectivity options for both audio and video inputs. Most importantly for modern users, there are two HDMI inputs, one with HDCP 2.2 that you’ll use for any 4K devices, and one without where you can plug in 1080p devices. There’s also a VGA input for older PCs, 3.5 mm audio inputs and outputs, and a 12-volt trigger for installations where you want to automatically power the projector on when other devices boot up.

The TK800 does have a small speaker for playing basic sounds — probably suitable for an office presentation — but we highly recommend you use outboard speakers whenever possible. As with most projector-based home theater setups, or any quality home theater setup in general, we recommend that potential buyers hook up their favorite streaming devices, Blu-ray players, and video game systems via a good outboard A/V receiver. This enables you to have better sound, and to have a central hub from which to pick your input source. Just make sure that your receiver is 4K and HDR-enabled, otherwise you’ll be missing out on all of the TK800’s potential.

The TK800 boasts the same fantastic image processing chip as the HT2550, which offers 8.3 million pixels and special HDR processing that aims to provide optimal color balance and contrast.

The main difference between the TK800 and the HT2550 projectors comes in terms of brightness. Where the HT2550 boasts a reasonable 2,200 lumens of brightness, the TK800 offers a significantly brighter 3000 lumens, easily making it the go-to option in rooms where ambient light may be more of an issue.

A 1.2× optical zoom makes the projector very easy to place. We enjoyed this feature, as it enabled us to place the projector a bit closer to the screen in our cramped basement — we got a 100-inch, 16:9 picture at a little over 12 feet from the screen. It’s worth noting that there is no vertical or horizontal lens shifting, image adjustment is limited to three rubber feet (one on the front and two on the rear) of the projector for anyone not mounting the projector.

Once you get it in place, the projector features automatic keystone adjustment, which adjusts the image so that it looks justified left and right, and top and bottom. The TK800 also features a number of built-in picture modes, including Cinema, Vivid TV, and Sport, as well as two custom adjustable modes for more advanced users.

We had no problem installing the TK800 ourselves, but if you have a more complex setup that requires new cable runs, ceiling mounting, and various other fine adjustments, we always recommend hiring a professional to save you long-term headaches. Just like the HT2550 model, the TK800 is very compact and light, making it easy to take outside for movie nights, or for other portable use.

In terms of long-term ownership and maintenance, the TK800 doesn’t come with an extra lamp, but the included lamp is rated to 4,000 hours in full lamp mode and 15,000 hours in “SmartEco” mode, which adjusts the brightness of the lamp based on image content to save lamp life. That’s less than the standard hours offered by the HT2550, but understandable given how much brighter the TK800 is. In any case, you’ll probably get years of screen time before you need to consider lamp replacement.

We tested the TK800 in our home theater in both complete darkness and with blinds open and lights on, in addition to one outdoor movie night. In general, we were very impressed with its performance in all scenarios. We primarily tested the projector with a Roku Ultra, but we also played media from a PC via HDMI.

While we always recommend placing any projector in as dark a room as possible, we did notice that the TK800 did better in brighter areas than the HT2550 did, especially when the projector was placed in Vivid TV mode. While we preferred the better color accuracy of cinema mode, which brought out the most depth and saturation in the content we we viewed, Vivid TV mode did the best to compete with ambient light, and we’d not hesitate to choose this mode if we weren’t easily able to darken our space or wait until sundown to watch our favorite shows and movies.

One thing we didn’t like about Vivid TV mode was that it had a tendency to blow out the brightest scenes of the content we were watching with a green hue. While this wasn’t particularly noticeable in a bright room, it was certainly noticeable in a dark one — and yet another reason we’d stick to cinema mode except in places with significant ambient light. That said, we can’t particularly knock this aspect of the projector. That’s simply what you get when you demand close to maximum brightness to compete with daylight, and it allowed us to start our outdoor movie viewing before the sun completely disappeared in the summer.

4K resolution is particularly astonishing and we loved how it turned our home into a comfortable mini-cinema.

When in cinema mode in a dark room, the projector creates shockingly beautiful images, especially when adding in HDR-processed highlights. When watching Netflix-produced shows like Chef’s Table and Stranger Things, we were shocked at the intensity with which it was able to deliver deep greens and sharp reds, transporting you to each show’s universe like a 100-inch window in your living room. 4K resolution is particularly astonishing at such large scale, and we absolutely loved the way that it transformed our home into a comfortable mini-cinema.

Just as we noted in our HT2550 review, black levels aren’t perfect, with a bit of light bleeding into areas that should be completely black on screen. Still, that’s a very difficult thing for even the finest projectors to manage, and a small amount of bleed is more than acceptable at the $1500 price point. The fact is, this projector — like the HT2550 — offers outstanding performance for how much it will set you back.

BenQ offers a three-year warranty on parts and labor, excluding lamps. Lamps on new units have a 180-day or 500-hour warranty from the purchase date, whichever comes first.

The BenQ TK800 is an excellent looking and extremely versatile home theater projector that ranks among the best we’ve tested.

There are a lot of fantastic projectors hovering around the same price bracket as the TK800 that may be worth considering. Those who want extended lamp life and have a darker room may want to consider the BenQ HT2550, which has the same gorgeous color accuracy. We also recommend that potential buyers check out the Optoma UHD50, which also boasts 3,000 lumens of brightness on paper (and costs about $100 less), but which we found slightly darker than the TK800 in cinema mode.

With a solid warranty and up to 15,000 hours of lamp life, the TK800 should last you through years of steady use.

Yes. If you’re looking for a home theater projector that can compete with ambient light and project great picture, the TK800 is among the best you’ll find.