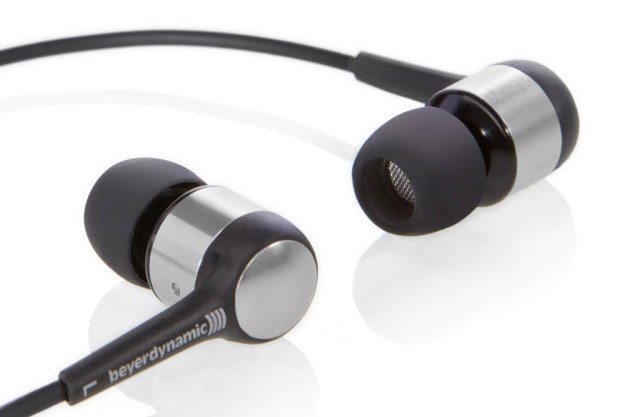 “Though we wished for a bit more meat and depth to the MMX 101’s midrange, we were impressed with the crisp, clear treble, and ample bass they delivered…”

Beyerdynamic has more than 85 years of experience in designing and crafting headphones and microphones. We recently reviewed its new flagship headphone, the Custom One Pro, which turned out to be remarkable set of cans with exceptional detail and wide stereo imaging. Having enjoyed Beyerdynamic’s big boys, we decided to run to the opposite end of the size spectrum and check out the company’s latest in-ear headset, the MMX 101 iE. We couldn’t help but wonder if the engineers at Beyerdynamic could squeeze some of the Custom One’s magic into a much smaller, more affordable package. Here’s what we discovered.

The MMX 101 iE come in a small disposable container with three sizes of replacement ear tips, a Y-adapter for connection to laptops and PCs for VoIP services such as Skype, and a pocket-sized, mesh carrying case.

The MMX 101 iE are a nimble set of in-ear headphones with minimalist styling. The headphone cable is an ample 1.2 meters in length, but the elbow-shaped 3.5mm jack seems slightly ill-designed, as it got in the way when we placed our iPhone in our pockets, and created interference when it was bumped or moved.

The earpieces have a small, bead-like design, with spherical metal backings in charcoal grey. A metallic band of the same color wraps around the midsection of the earpiece, and the earphones’ 13mm dynamic drivers extend from the band in black plastic, adorned with silicone ear tips.

Along with the good selection of accessories mentioned above, the 101 also come with a clip attached to the cable, and a single-button inline microphone connected just below the left earpiece. We always appreciate an included mic, but found its placement directly below the earpiece slightly awkward to access.

As far as in-ear headphones go, the MMX 101 are fairly comfortable. The standard ear tips that came pre-fitted on the earpieces fit us well (a first), and we had only one incident of “earbud fallout” as we traveled with the headphones – an impressive feat.

We tested the MMX 101 by listening to a variety of different tracks, mostly through our iPhone 5. The headphones exhibited several sonic aspects that we appreciated, highlighted by detailed clarity and a well-separated stereo image. We also found a few weak points, mostly relegated to the midrange, which we found was pretty anemic at times.

One of our favorite test albums is the warm and well-produced God Willing and the Creek Don’t Rise by Ray Lamontagne. The MMX 101’s clear and brilliant tone shone brightly on the entire album, showcasing the tangled web of stringed instruments with fine-pointed detail. Lap slide, acoustic guitar, and banjo rang out with clean radiance in both channels, and Ray’s voice was well handled, though slightly lacking in depth.

We found a stronger showing in the 101’s handling of bass frequencies, especially in the 100-500 Hz range, which was well-defined and robust. The drivers delivered a decent helping of power in the low end for an in-ear, and while they never quite reached the very bottom of the 60Hz area with full force, they did an admirable job of covering the low groove on hip-hop and electronic tracks.Turning to other acoustic albums, we were less impressed with the limited breadth and dimension of the 101’s sonic character, which seemed to lack the foundation needed to present the music at its fullest. Songs like REM’s “Finest Worksong” or “Whispers in the Dark” by Mumford and Sons revealed the holes in the middle of the frequency spectrum, leaving guitar and percussion a bit flat and undefined. The midrange of the 101 just didn’t seem to have the power to carry these lighter productions, laying a weak, slightly metallic sheen on the music.

The pinnacle of the MMX 101’s sound for us was its handling of treble, which helped create the MMX 101’s signature, lucid accuracy. Aside from some slightly accentuated sibilance in the 5-7kHz range, the majority of the upper register was crisp, detailed, and expansive, staying safely beneath that line where brilliance turns into sharpness. Shimmering crash cymbals, hi-hat stick work, and ride cymbals were all delivered with grace and definition, and the sweet, vibrant top end of saxophone and brass instruments was a joy to take in.

Beyerdynamic’s website lists the MMX 101 iE at $125, which we felt was a bit high. Fortunately, we found these headphones available for around $70 online, putting them more in line with what we’d expect, given our observations of their sound quality. Though we wished for a bit more meat and depth to the MMX 101’s midrange, we were impressed with the crisp, clear treble, and ample bass they offered, delivering some particularly enjoyable moments during our listening sessions. If you’re looking for an affordable in-ear with top-end accuracy and some low-end punch, the MMX 101 iE are worth a listen.