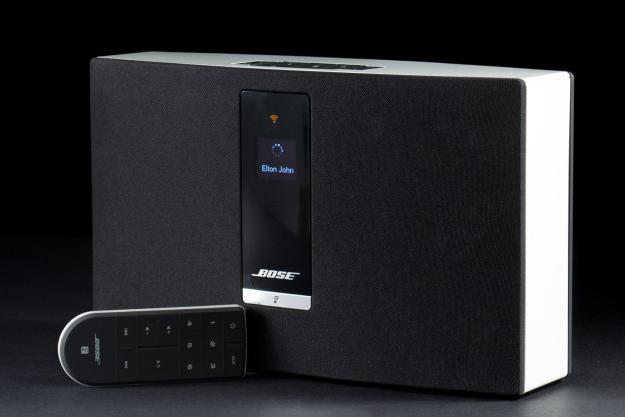 We think it would be appropriate to call this moment in audio’s history ‘the wireless era.’ New speakers touting Bluetooth, Airplay, DLNA, WISA, and the new DTS protocol, Play-fi, seem to spring up overnight. We’ve seen several worthy offerings amongst the fray, and plenty of others that lived fast and died hard. But somewhere in the middle of this cacophony of wireless devices, Sonos emerged like a shining beacon of simplicity, offering its own ecosystem of speakers that breath Wi-Fi, stream hi-fi, and work together incredibly well.

Not surprisingly, the ‘Sonos way’ has spawned copycats, including an intriguing effort from Samsung, as well as a new line of speakers from a more familiar name in audio, Bose. The lineup includes a fully portable version, as well as the Soundtouch 20, and Soundtouch 30 which are both leased to a power outlet. We recently spent some time with the $400 Soundtouch 20, which is in direct competition with the popular Sonos Play:3 speaker. Here’s what happened when we fired up the Soundtouch 20 and took it for a long ride.

Pulling the hefty Soundtouch 20 from Bose’s familiar blue and white package revealed a rather attractive speaker, accented with a glossy sheen of patterned white plastic. The front face was covered in a black fabric speaker screen, with a full digital display cut through the center. Perusing the back of the speaker we discovered a matching black panel of plastic, and at the bottom, a small hub of ports including both USB and mini-USB inputs, an Ethernet port, an Aux input, and a power port.

Perhaps the most interesting feature that caught our eye as we gave the speaker a onceover was a panel of soft-touch rubber keys at the top numbered 1 to 6, accompanied by the usual volume and power keys. While the numbered keys struck a distinctly ‘90’s vibe, we would soon find out that the intentionally retro controls offered a very intuitive approach to controlling the speaker.

In the box we found a USB to micro-USB cable for system setup, a small remote outfitted with a similar pattern of rubber keys, and setup and instruction manuals.

It’s virtually impossible to bullet point the Soundtouch 20’s features without drawing comparisons to Sonos’ speakers. Both systems offer smartly-designed components that connect to a wireless network. The systems both run through a PC and mobile-based command application to create an ecosystem that communicates to and from the speakers seamlessly from any control point. And both systems also offer the ability to connect multiple speakers throughout the house without latency, playing the same or separate streams from your music library, or through online sources like Pandora and any number of Internet radio stations. However, Soundtouch deviates from Sonos in several key categories, adding some pros and cons along the way.

The first feature that immediately differentiates the two systems is Bose’s more complex design approach. While Sonos’ speaker design is an utterly succinct, one touch/one button affair, Bose’s full digital OLED display, and multi-key configuration offer more versatile onboard control. The six key configuration is particularly useful, allowing you to program presets for one-touch launching of your music library, Pandora, podcasts and iTunes playlists, and stations from the system’s proprietary internet radio app. Even if the device is turned off, simply pressing a preset on the speaker, or via the main controller app or remote snaps the system immediately into action.

You may have noticed we didn’t mention support for any apps besides the Soundtouch Internet radio station and Pandora. That’s because there isn’t any. Bose implies that more apps are on the way, and we have no doubt that’s true, but at present the selection is pretty paltry. However, unlike Sonos, the Soundtouch offers a simple solution via its Airplay connection, which allowed us to easily tap into our own apps like TuneIn Radio, Spotify, and others from our iPhone 5. Airplay doesn’t work with the preset buttons, and it can only connect to multiple Soundtouch speakers from a Mac or PC, but other than that, it was an easy workaround for Bose’s current content shortage.

The Soundtouch also offers a more succinct method for integrating your full music library. Unlike Sonos, which requires users to load content into its queue system, or create playlists, we simply followed the commands to sync our iTunes Library, and “bam!” we had our full music collection on demand. OK, to be fair, our library wouldn’t sync at first, and we had to erase it from the app and reload it to make it work. But we’ll get into that more in the setup section.

Another welcome facet to the Soundtouch system is its stand-alone wireless streaming capabilities. While Sonos speakers require a $50 add-on Bridge device to connect to Wi-Fi, Soundtouch can connect autonomously to your router over Wi-Fi, or via Ethernet. The speaker also includes a 3.5mm Aux input to connect to wired components.

One notable feature that puts Sonos ahead of Bose’s system is the fact that Sonos devices can stream CD quality audio, while the Soundtouch 20 only allows for lossy files such as MP3, AAC, and WMA . That limitation bars the Soundtouch from reaching hi-fi level audio quality, giving Sonos a major edge for the audiophile set. On the other hand, most users have at least 90 percent of their music in MP3 format, so for them, the difference may be a wash. Another hi-fi coup for Sonos is its ability to split a pair of speakers into dual channels for true stereo separation, something the Bose family can’t do at this time.

As for hardware, Bose doesn’t publish detailed specs of what’s under the hood, so we have none to offer you. Pay no attention to the man behind the curtain!

If we’re to continue our comparison, setup is where Sonos wins every time. With the Play:1, we simply pressed the button on the speaker, waited for a brief moment, and the system was sharing our wireless network. Bose’s system is more involved, requiring a few steps from the computer while hardwired into the device. It wouldn’t have been a big hassle, except that our review unit couldn’t find the first network with which we attempted to connect. That led to the more arduous process of connecting directly into the speaker with our iPhone 5, and then guiding it to the router.

When we later connected the speaker to our home network, it easily found the router the first time, but as mentioned, the system then failed to sync to our iTunes library. After erasing the empty library within the app and reloading it, the system was finally able to sync, and from there we had no issue. While connecting the Soundtouch 20 wasn’t extremely complicated, it was more involved than some novice users will be prepared for, especially if they run into the same hiccups that we did.

Once we got the Soundtouch 20’s wireless connection set up, streaming was a breeze. We had zero stutters while playing our iTunes Library, and also encountered no issue with Pandora, or playback via Airplay. We also noticed the system was extremely efficient when it came to battery constraints on our iPhone 5, draining only a few percentage points after streaming for over an hour.

The few issues we did encounter were relatively minor. We noticed some slight delay in playback from songs when skipping through our catalog, and we also couldn’t find our full catalog while searching through the Songs category, though they were all there when we looked under Artists and Albums. Our only other beef was that we couldn’t figure out a way to search forward or backward within a track. Even when we clicked on the track for more options, we were only able to skip backward or forward to the next song, which we couldn’t help but find a little annoying.

The Soundtouch 20’s sound signature told a tale of three registers, creating a bit of a fight for attention between the thick, booming bass, the smooth, passive midrange, and the crystal clear, sometimes aggressive treble. The three fought a tenuous tug-of-war, with the bass sometimes thickening the mids too much, and the treble cutting in a bit too sharply, especially in snare drums and acoustic guitar. Overall, though, the sound was clear and enjoyable, able to showcase a wide variety of musical styles with room-filling sound.

The speaker had an easy time with electronic music, delving deep into the timbres of the upper percussion and synth instruments with clean precision. When we auditioned the tune “Unless” by Atoms for Peace, the speaker dredged up the scratchy pops and clicks of the synths with sharp presence, and cut silvery cymbals that had just a touch of bite. Vocals were present and smooth, and the bass was remarkably full, buzzing through our coffee table, and balancing the equation with a powerful, foundational pulse. We were also impressed by the speaker’s excellent stereo separation here, as it bandied the transients from left to right.

… tracks like those from Bowie’s “Andy Warhol” had just a bit too much extra edge for our taste.

The next song we auditioned, “Little Black Submarines,” exposed what might be this speaker’s greatest weaknesses, revealing the treble’s penchant to add a thin and tinny color to some of the instruments. The acoustic guitar at the intro was brighter than we wanted, and when the song broke into its chaotic wash of cymbal crashes and guitar distortion, everything just sounded too buzzy and sharp.

There were a few similar moments as we moved through our catalog, particularly with our brightest recordings. The lighter snare drum tone of Beatle’s tunes like “The Walrus”, and “Hello Goodbye” were flat and without that warm 60’s tape distortion we expect from a well-balanced system. And brighter acoustic tracks like those from Bowie’s “Andy Warhol” had just a bit too much extra edge for our taste.

We were brought back into the fold with “Rock & Roll and Radio” by Ray Lamontagne. Here the speaker unveiled a rich, golden tone from the acoustic guitar, and Ray’s voice had just enough vibrance and presence to bring us in. The speaker didn’t quite flush out the timbres of the rest of the instrumentation as much as we would have liked, but it was well-balanced and spread through the soundstage with excellent separation.

Bose’s new Soundtouch 20 provides an excellent form factor, solid sound quality, and an intuitive wireless ecosystem that worked remarkably well for a first take. While there were some slight disappointments with the sound itself, we found the speaker to be very easy to use, whether providing a full and pleasant backdrop for gatherings, or for just relaxing and exploring our catalog. We still think Sonos is the leader of the pack, but Bose’s new Soundtouch 20 provides some real competition in the field, and could be an enticing alternative to the Sonos way.

Topics
The best Bluetooth speakers for 2023: Marshall, Sonos, JBL, and more
NAD’s CS1 adds wireless streaming music to any audio system
Bowers & Wilkins’ wireless earbuds get better battery life and longer range
The best headphones for running in 2023
The best ultra short throw projectors for 2023
How to watch Puppy Bowl 2023
BluOS will be updated to 4.0 with a fresh look, new features
Samsung accidentally reveals price of its 77-inch QD-OLED TV
The best QLED TVs for 2023: bring on the brightness
The best OLED TVs for 2023: from LG, Sony, and Samsung
The 50 best movies on Netflix right now (January 2023)
The best movies on Amazon Prime Video (January 2023)
The best new shows to stream on Netflix, Hulu, HBO, and more