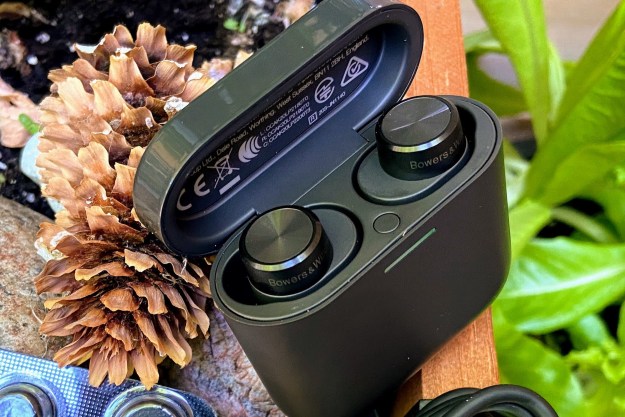 “Slick and stylish, the PI5 offer an alternative to white plastic earbuds.”

It took Bowers & Wilkins (B&W) longer than expected to launch its first true wireless earbuds, but they’re finally here: The $400 flagship PI7 and the step-down PI5, which cost $250. The slick-looking earbuds hit the market at a pivotal time when most brands are already working on their second-, third-, or even fourth-generation products, having had years to learn and make improvements. Can B&W jump in with a first-gen product with a top-tier price and give the incumbents like Sony, Bose, Jabra, and JBL a run for their money?

I put the B&W PI5 through their paces to see.

Not only is B&W a little late to the true wireless party, but it also seems to have missed the memo on sustainable packaging. Though the box is relatively small, it has embedded magnets, foam padding, and fully coated surfaces, which will make it difficult, if not impossible, to recycle.

Inside, you’ll find the PI5 already in their charging case, two additional sizes of eartips, some paper documentation, and a generously long USB-C to USB-C charging cable. Unfortunately, B&W neglected to include a USB-A to USB-C adapter for those of us who don’t have a readily available USB-C port or charger.

The earbuds manage to look smaller in your ear than other earbuds, thanks to their terraced shape.

B&W has a flair for sophisticated designs. Whether it’s the company’s full-sized PX7 headphones or its Formation wireless speakers, it’s all about understated elegance. The PI5 share this design language, with smooth lines and subtle accents like the spiral texture on the outer touch control surface and an aluminum ring bearing the B&W brand.

The earbuds manage to look smaller in your ear than the Sony WF-1000XM4, Jabra Elite 85t, and JBL Tour Pro+, thanks to their terraced shape.

They’re easy to extract from their wireless-capable charging case, and the case’s magnets have just the right amount of strength to lock the earbuds in place with precision — no worries here about misaligned charging contacts.

The case’s lid flips open and shut smoothly and easily and the large LED indicator on the front lets you quickly check its charging status, as well as the status of the buds when they’re docked.

The case is just small enough to be pocketable. The only hitch in an otherwise beautiful design is B&W’s choice of plastics for the case: Within moments of unboxing it, the case was covered in fingerprints and even assiduous buffing with a soft cloth couldn’t restore it to its factory condition.

They don’t look like it, but the PI5 are IP54-rated for good dust resistance and moderate water resistance. The case, however, is not protected against either dust or water, so make sure you clean the earbuds before replacing them.

The PI5’s sleek lines don’t exactly suggest great comfort, but I found them to be very comfortable. The inner portion of the earbuds are gently curved, while the outer portion manages to sit within the concha, where, along with the silicone eartips, it locks the earbuds into place.

You want to quickly shift from hearing nothing to hearing as much as possible. But there’s simply no way to do that.

They may not be perfectly secure for high-energy workouts, but I think most people will find them suitable for their daily run or treadmill routine.

Like most touch controls, there are times when taps on the PI5 didn’t register, but B&W includes a feedback tone so you know when you have tapped accurately. There’s no way to alter the gestures — you get play/pause, call answer/end, track skip forward/back, and voice assistant access. Volume control must be done on the phone (or you could ask Siri/Google Assistant to do it).

There’s also the ability to toggle active noise cancellation via a tap-and-hold gesture on the left earbud, but I’m not wild about it. To my mind, the opposite of ANC on isn’t ANC off, it’s transparency mode on. You want to quickly shift from hearing nothing from the outside world to hearing as much as possible. But there’s simply no way to do that. To switch from ANC (on or off) to transparency, you must use a control that’s buried in the B&W Headphones app.

Bizarrely, it’s possible to have both ANC and transparency modes engaged simultaneously, which makes no sense at all. This is a big oversight that I hope the company fixes with a firmware update as soon as possible.

The PI5 are equipped with wear sensors (which can be disabled in the app) and they work very accurately, pausing and resuming music almost immediately when you remove or replace an earbud.

We experienced some pretty flaky Bluetooth connections when testing the B&W PI7, but for the most part, the PI5 were reliable. Their wireless range is perfectly acceptable if you keep your phone with you: 35 feet outside and 20 feet or so indoors, but if you need to roam more than this, you’ll likely experience dropouts.

I had a few glitches when getting the PI5 to reconnect after being put back in their case. The earbuds would often take several moments to power on, and then another five to 10 seconds to reconnect to my phone.

On one occasion, the earbuds shut down the microphone portion of the connection without warning. About halfway through doing a recording, they simply stopped working and I had no idea until I played the recording back.

On some tracks, the lower midrange can start to sound a little distorted.

On the plus side, the PI5 can remember the last four paired devices, and the app will let you select which of these should be tried first when you pull the earbuds out of their case (or you can select “last paired” as the default). You can also use each earbud independently.

The PI5 have a very bass-forward sound signature, giving music a warm, rich, and full rendering. That bass lets you really feel the dark strains of a track like Hans Zimmer’s Time, but it lacks the subtlety of Sony’s WF-1000XM4, which are better at teasing out the little nuances.

The challenge here is that B&W doesn’t offer any EQ adjustments within the app. On some tracks, like Dominique Fils-Aimé’s Home, in which deep acoustic bass thrumming and drums are accompanied by sultry vocals, the lower midrange can start to sound a little distorted. This becomes more pronounced as you ratchet up the volume. It’s not a deal breaker, and despite the lack of low-end precision, there’s excellent clarity in the upper midrange and highs, making vocal performances really enjoyable.

The PI5 are equipped with Qualcomm’s aptX Bluetooth codec, which should offer slightly better performance than AAC, but I wasn’t able to make out any difference when switching back and forth between an iPhone 11 (AAC) and a Google Pixel 5 (aptX).

On less expensive earbuds, I’d probably overlook this, but at $250, the PI5 are up against superb audio performers like the $200 Sennheiser CX 400BT, $230 Jabra Elite 85t, and $230 KEF MU3, all of which have excellent frequency separation.

Active noise cancellation on the PI5 is very good. It was able to totally kill the sound of my loud bathroom fan from a distance of six feet, and it also adapted well to traffic and construction sounds as I walked around my neighborhood. It’s actually a remarkable feat considering the earbuds only have two mics. Most earbuds with ANC that’s this good require three mics.

Without any tunes playing, you can just make out a tiny amount of hiss, but it’s minor and easily ignored.

Transparency mode, which you can fine-tune to let in more or less sound, is also very good, but it doesn’t quite achieve the AirPods Pro’s uncanny ability to make it seem like you aren’t wearing any earbuds at all.

As I said above, the big problem is not being able to switch between ANC and transparency quickly and easily.

B&W claims a 4.5-hour battery life per charge for the earbuds with ANC turned on, which can be extended by another 20 hours with the charging case for about 24.5 hours of use before needing a cable or wireless charger. This puts the PI5 on par with the AirPods Pro, but still near the bottom of the range for current true wireless earbuds.

During testing, I found these numbers to be a bit on the optimistic side. With ANC on and volume set to 50%, I only got just over four hours of play time.

There is a fast-charge feature, however, which could help with range anxiety: 15 minutes in the sockets gets you an additional two hours of play time.

I found the PI5 did a good job with canceling background noise while on calls. Even some wind noise didn’t pose a problem. But B&W may need to boost the gain on the microphones — my voice sounded a little far away at times.

You can switch to transparency mode while on a call (from within the app), which really helps you to hear your own voice more clearly.

I’m just not sure what to make of the mic dropout issue I mentioned earlier. If that happened consistently when on phone calls, it would become a huge nuisance.

Within the B&W Headphones app, you’ll find a series of six “soundscapes,” like wave or forest sounds, which can all be set with a timer to help you fall asleep. These could be helpful for grabbing 40 winks when flying, but I doubt most folks will want to wear these earbuds to bed.

The PI5 bring B&W’s famous elegance and sophistication to the true wireless earbud world, but a few weaknesses keep them from usurping the reigning brands at this price.

For the same price as the PI5, Apple’s AirPods Pro deliver a better overall experience for everything but sound quality. They’re smaller, more comfortable, and they have better ANC and transparency modes.

For a non-Apple alternative, the $230 Jabra Elite 85t are superb, with better sound quality, better battery life, tons of customization, and more useful and effective ANC and transparency modes.

For even more savings, try the $199 JBL Tour Pro+ — their bass isn’t as powerful, but in every other respect, they’re as good or better than the PI5.

B&W backs the PI5 with a two-year warranty, which is double the average for . They appear to be very well built, and with their IP54 rating, they should survive most activities without damage. My one concern is the battery. All batteries lose capacity over time, so it’s not ideal when your earbuds start life with a maximum of 4.5 hours — this could easily drop to just two hours after a year or two of regular use.

Yes. If you can get past their awkward ANC/transparency controls, the B&W PI5 offer a very stylish and rich-sounding alternative to the current crop of noise-canceling .

Topics
Apple AirPods Max 2: what we know, what we want, and how much it will cost
Nothing might launch new hi-res earbuds at CES under the XO brand
Bowers & Wilkins and McLaren launch special-edition Px8 headphones
AptX Adaptive vs. aptX HD vs. LDAC: Which Bluetooth codec is the best?
Beats Studio 3 headphones are $120 off today at Amazon
Best 4K projectors for 2023
The best ultra short throw projectors for 2023
How to watch Puppy Bowl 2023
BluOS will be updated to 4.0 with a fresh look, new features
Samsung accidentally reveals price of its 77-inch QD-OLED TV
The best QLED TVs for 2023: bring on the brightness
The best OLED TVs for 2023: from LG, Sony, and Samsung
The 50 best movies on Netflix right now (January 2023)