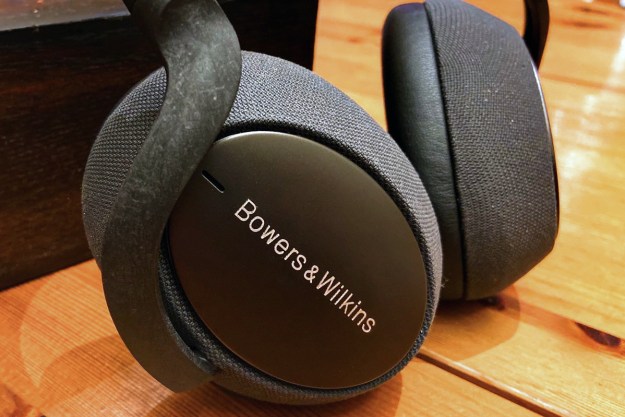 “The PX7 rewards owners with luxury, durability, and great sound.”

Bowers and Wilkins introduced its first noise-canceling headphones in 2018: The B&W PX. We were impressed not only by their gorgeous design but also their sound quality and noise-canceling performance. This year, B&W is back with its newest flagship, the $400 PX7 Adaptive Noise Cancelling Wireless Headphones.

Promising better battery life and a lighter design, along with the latest Bluetooth technology, the new wireless iteration of B&W’s famed P7 headphones faces the latest generation of rivals, including Sony with its superb WH-1000XM3 (now down to just $280) and Bose’s $350 Noise Cancelling 700 headphones. Here’s how they stack up.

The PX7 are a great example of understated luxury. Whether you choose the silver or space grey option, the headphones look like they belong in the accessory catalog of a Porsche 911 or an Aston Martin. Even the included hard-shell case — a welcome upgrade from the PX’s soft bag — adds to the aura of exclusivity.

Fans of the B&W PX will find the PX7 instantly familiar: The hidden slider adjustments within the headband and single-sided earcup pivots are still in evidence, but carbon fiber has replaced metal in these areas, reducing the weight by 25 grams. The stretched fabric now covers more contours, while the matte-finish aluminum ovals remain on the outside of the earcups. It’s still very much a classy and sophisticated look.

Build quality is first-rate. The rotating joints and pivots have silky-smooth movement and just the right amount of resistance. The headband adjustment is equally pleasing. The sliders move with precision and stay put when you’re done, but there are no notches — instead, they feel like they’re being controlled by tiny, invisible gears.

I got the impression that they were made for my head specifically.

Slipping them on for the first time, I got the impression that they were made for my head specifically. The earcups seat themselves with an impressively even seal and the memory foam pads find that perfect balance between cushion and grip. As with the PX, a slightly wider headband would be more comfortable, but once in position, the earcups take the majority of the weight.

If you’re going to spend this kind of coin on a set of wireless headphones, the sound quality had better be awesome. The PX7 do not disappoint. It’s easy to say words like “full,” “rich,” or “detailed,” when describing what a given set of headphones sound like.  But when it comes to the PX7, it’s not just lip-service. They deliver all of these attributes in a big way. The sound is both expansive yet intimate — a difficult juxtaposition to pull off — with the highly desirable ability to reveal layers to your favorite tracks that lesser headphones or earbuds simply can’t do.

Bass is deep and satisfying without becoming overbearing. The treble soars clearly and freely, as it should, while the midrange is almost always able to hold its own against these two competing forces across a wide variety of genres. I say “almost,” because I did find a few tracks, like Halsey’s Finally // Beautiful Stranger where the mids seemed a bit muddied, but these were exceptions to the rule.

The PX7 do a respectable job with garden-variety MP3s, but as with any pricey cans they only truly show you what they can do when you give them something more weighty like Tidal’s HiFi collection of CD-quality and hi-res tracks.

It’s worth noting that the PX7 have incredible support for Bluetooth codecs: SBC, AAC, aptX, aptX HD, and even the latest aptX Adaptive are all on tap. I didn’t test the headphones using these codecs, but given how good my iPhone 11 sounded with Apple’s basic AAC support, those with aptX devices are likely in for a treat.

The sound is expansive yet intimate.

As with the PX, you can use the included analog cable for wired listening, while the USB-C cable does double-duty as a charger and digital audio connection to PCs and Macs.

The PX7 are B&W’s premium noise-canceling headphones, but the company’s PX5 and PI4 also offer the feature.

The older PX asked you to choose between three ANC modes: Office, City, and Flight, with Flight being the strongest. On the PX7, there are still three modes, but now they’re Automatic, Low, and High. If you leave the feature on automatic, general sounds like the coming and going of traffic or background chatter in an office will be nicely subdued.

However, constant droning sounds like an airplane cabin (or my equivalent: A bathroom fan from 10 feet away) really need the optional “high” ANC mode. The low mode sounded the same as automatic, but perhaps there are additional nuances depending on the environment you’re in.

All told, it’s really well executed. With ANC on — and especially when using the high mode — you’re treated to that wonderful cone-of-silence effect that is valuable on its own, but it’s even better as a neutral background for your music.

I kind of wish there was a dedicated ANC on/off switch instead of just the single button for all ANC functions.

As is often the case with ANC, if you’re already in a quiet environment, you become aware of a telltale noise-canceling hiss, but even on high, this was barely noticeable. One quirk I found was a tendency for my head position to affect the quality of the noise-canceling. If I stood in one spot and turned my body relative to the main source of the noise, the ANC struggled a bit to keep things even. Given most of us will be sitting in one spot while using it, it’s a minor detail.

My callers noted that call quality was generally very good when I used the PX7. Perhaps not as and clear as when I held my iPhone to my face, but certainly more than adequate — and better than recent I’ve tested like the Amazon Echo Buds and Jabra Elite 75t. The PX7 weren’t as successful when it came to counteracting the effect of loud traffic. My callers could still hear me, but the sounds of the cars also came through.

Bowers and Wilkins has a free app for iOS and Android, simply called Bowers and Wilkins Headphones (not to be confused with the B&W PX app which claims to work with all PX headphones — it does not work with the PX7).  It lets you manage Bluetooth connections (it can support two at once), adjust the noise-canceling setting (which you can also do on the headphones), and tweak a few minor things like whether or not the headphones auto-pause when you pull an earcup away from your head. You can also choose the amount of ambient passthrough sound.

There’s no EQ adjustment, though, which is unfortunate. I think the factory EQ is very good, but as with all things audio-related, it’s a matter of taste. Being able to adjust the EQ is something I’d expect to be able to do on a set of high-end wireless cans. Sony’s WH-1000XM3, for instance, offers multiple levels of ambient audio control and solid EQ parameters as well.

In addition, the PX7 app’s battery level indicator has no percentage or hours remaining readouts, and there’s no way to modify what any of the control buttons do.

Speaking of controls, while the PX7 are beautifully crafted, they’re a little awkward to use. Because of the shape of the earcups, the controls on the right earcup are almost impossible to avoid when taking the headphones on and off, causing a lot of inadvertent button presses. The secret, I’ve found, is to grab the single-sided pivot arms, but it’s not an ideal solution.

Still, once seated, those same controls are easy enough to use, with well-defined contours that make them a snap to locate and press. I also like that the ANC feature gets its own dedicated button on the left earcup. I’ve seen this before on other ANC models, and I think it’s the ideal location.

The B&W PX already had very good battery life at 22 hours, but the PX7 raises this number to 30, according to B&W. That’s the same battery life as the Sony WH-1000XM3 mentioned above, and I don’t think the claim is overstated: After running the PX7 for 17 hours straight, at 50% volume and with ANC on, the battery indicator within the app showed about half its life remaining. If you need a quick top-up, 15 minutes of charging will get you an additional five hours.

No help at all

Somewhat surprisingly — given that it’s almost 2020 and the PX7’s regular price is $400 — there’s no voice assistant support. Now I’m not a huge Siri, Alexa, or Google Assistant user, but there are times when being able to summon them either hands-free or via a button can be very helpful. It feels odd that a feature which is included on headphones and earbuds which retail for $75 or less can do this and the PX7 can’t. Perhaps B&W will add it with a future firmware update, but for now, you’re on your own for recipes, directions, music, and phone calls.

The PX7 continue the company’s tradition of crafting gorgeous and great-sounding headphones. Unfortunately, they also continue the tradition of very high prices. Though a worthy follow-up to the PX in terms of battery life, the lack of voice assistant access means these fancy cans have actually fallen further behind when compared to the best from Sony, Bose, and others.

The Sony WH-1000XM3 might not turn heads the way the PX7 will, and they certainly don’t possess the PX7’s refinement of design and materials, but in every other respect, they’re as good or better and cost significantly less.

With a two-year warranty and a build quality and materials that are among the best we’ve seen, the B&W PX7 should last as long as you need, provided you care for them. The included hard-shell case makes that task easier.

If money’s no object, and you don’t mind the absence of voice assistant access, the PX7 deliver a rewarding and luxurious wireless listening experience. But you’ll find better value and more features from the competition.

Topics
Klipsch follows the success of The Fives with The Sevens and Nines powered speakers
Marshall’s latest Bluetooth speaker has four drivers for 360 sound
The best waterproof Bluetooth speakers for 2023
BluOS will be updated to 4.0 with a fresh look, new features
Super Bowl 2023 halftime show: who’s performing?
The best indoor TV antennas for 2023
The best VPN for streaming for 2023
Showtime is being merged into Paramount+
Sling is now 50% off — stream live sports without cable
Everything leaving Hulu in February 2023
Peacock does away with free tier for new subscribers
Is there a Sling TV free trial? Here’s what you need to know
What’s new on Apple TV+ this month (February 2023)