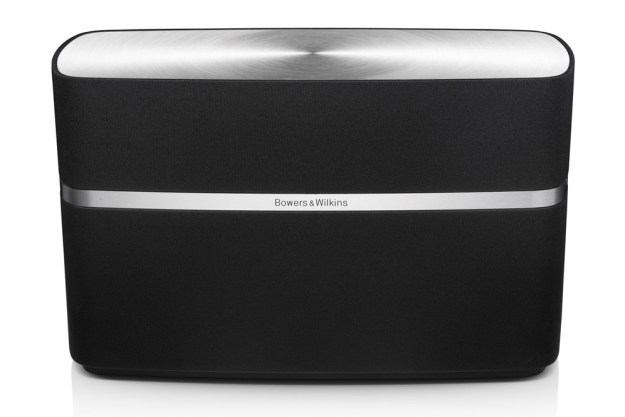 “The Bowers and Wilkins A5 may be one of the pricier AirPlay music systems on the market today, but it’s also one of the best.”

When Bowers and Wilkins (B&W) released its Zeppelin iPod/iPhone dock a few years ago, it was something of an anomaly. It was one of the first docks designed to provide an audiophile-quality experience from the lowly iPod, and its funky-looking shape, said to enhance sound quality, surprised many of those who were expecting something more conservative-looking from the typically understated British speaker company. Five years on, an AirPlay-updated version of the Zeppelin is joined by two other untethered speakers: the $799 A7, which is now the top model in the lineup; and the entry-level, $499 A5, the subject of this review. Read on for our detailed impressions.

While the A5 wasn’t as sumptuously packaged as some of the pricier B&W products we’ve seen, it nevertheless arrived in a well-packed, attractively-finished cardboard box. Getting at the contents inside couldn’t have been any easier: Simply open the top flaps, pull out the retaining dense foam top cap, and pull out the wireless speaker inside. B&W seems to have made a habit out of providing a simple yet pleasing reveal experience, and in this regard the A5’s packaging did not disappoint.

Freeing it from its box, we were surprised by the A5’s compact yet solid feel. Its premium design aesthetic practically oozes quality, and we couldn’t help but run our hands over its brushed metal top plate and soft wraparound cloth, all the while noticing its clean lines, elegant shape, and hidden controls. Bowers & Wilkins’ signature dimpled “Flowport” is present around back, and a racetrack-shaped rubber footer resides on the bottom of the enclosure. Overall, the A5 seemed quite well-made in typical B&W fashion, and we appreciated the A5’s simple yet elegant form.

The A5 doesn’t feature any sort of physical docking capabilities; it’s designed to work primarily with Apple’s wireless AirPlay technology. The speaker accepts streaming music from your iPad, iPhone, or iPod Touch device running on iOS 4.3.3 or later. You can also use any Mac or PC running iTunes 10.2.2 or later, and an Ethernet port on the back offers an alternative to Wi-Fi. An analog auxiliary input on the back also lets you hook up an additional source the old-fashioned way.

One feature that is missing from the B&W A5, however, is any sort of whole-home networking feature. While you can have an unlimited number of A5s around the house, there’s no option for multi-room, multi-source playback and control for the A5, since it can only be controlled by your iOS or iTunes device. You can use your computer’s iTunes program to simultaneously play the same music source through multiple A5s, but not with your iPhone or similar device. Maybe B&W figures most A5 buyers will already have large A/V systems built around the company’s traditional speaker offerings, but multi-room capabilities along with a suitable controller app would’ve made the A5 shine. It certainly did so for the Sonos Play:3 speaker.

Before we could start listening to the Bowers and Wilkins A5, we first had to set it up and pair it with our iPhone. And since the A5 operates as a self-contained music player, setting it up couldn’t have been easier. We first downloaded B&W’s AirPlay setup app to our iPhone 4, and then followed the text prompts to initiate a series of pairing commands. Clear instructions and helpful pictures had us up and running with our A5 in less than 10 minutes. From there we were able to easily control the A5 from our iPhone’s music player just like any other AirPlay device.

Since the A5 sounded quite rough out of the box, we let it break in for about 20 hours before doing any serious listening. Once broken in, the A5 possessed a good chunk of that hallmark Bowers and Wilkins sound: clean, clear and refined, with a bit of extra warmth in the mid bass, and slight emphasis in the upper mids. This sort of tailored frequency response also made the A5’s sonic picture seem bigger than it was, providing a room-filling sound when called upon.

The A5 also maintained its composure with every kind of music we threw at it, from electronica and hip hop to classical and jazz and beyond, regardless of volume. It even sailed through some vintage Enrico Caruso recordings, allowing us to focus on the powerful operatic tenor instead of the rather lo-fi recording quality. While B&W’s A5 didn’t deliver the most stunning sound we’ve heard, it always sounded fairly neutral and well-balanced, and it was certainly impressive for a sub $500 wireless music player.

It was only after we decided to test the A5 around other parts of the house that its sound really started to come alive. Once we positioned it about a foot and a half or so from a room corner, we knew we’d found a symbiotic spot. The A5 seems tailor-made for boundary reinforcement, sounding like a much larger speaker, with a hugely powerful, rich, and stunning bass response without ever being bloated or muddy.

We cued up Kruder and Dorfmeister’s classic album, The K&D Sessions, cranked it nearly all the way up, and marveled at some of the cleanest and deepest bass we’d ever heard from a pair of 4-inch drivers. Granted, the A5’s Flowport was probably a major contributing factor here, but we’ve never before heard this kind of jaw-droppingly big, yet impeccably clean bass performance from such a small speaker. The A5 seemed more than happy to kick out the decibel-heavy jams, and only when we pushed the A5’s volume near its limits did we experience any noticeable compression or distortion.

It should be noted, however, that the A5’s placement sensitivity also means it can sound less than ideal in certain locations, such as out in the middle of a room, or anywhere without at least one boundary reinforcement surface nearby. For example, we tried placing the A5 on top of our kitchen and dining room tables – both out in the open – and in both cases, we lost nearly all low bass response and roughed up the mids a bit. Still, those placing the A5 in more typical locations, such as on a bookshelf or countertop, should have excellent results overall. Bottom line: Don’t be afraid to experiment with the A5’s placement; a little goes a long way.

Unfortunately, the B&W A5 does seem to have a couple of consistent sonic flaws. Listening to that same Kruder & Dorfmeister album, along with Massive Attack’s Mezzanine and Radiohead’s King of Limbs thrown in for good measure, we could hear that some harmonic decay and upper treble detail was missing. This effect made the A5’s upper treble sound a bit recessed overall, leading to a slightly closed-in sound.

We could also hear that the A5’s upper bass and lower mids sounded a bit thinner than we’re used to hearing, robbing some large scale instruments and complex music of its power. Listening to Lang Lang’s rendition of Liszt’s “La Campanella” in G sharp minor, his concert grand piano sounded noticeably less fulsome and dynamic than it should have. Still, these flaws didn’t detract too much from the A5’s well-composed sound, and it maintained a commendably clear and refined sound even at monstrous volume levels.

Day after day, the A5’s auto sensor reliably started it up without a hitch, and its wireless operating range seemed limited only by our router’s capabilities. Its remote control also came in handy if we were talking on the phone and needed a convenient way to turn down the A5’s volume, or if we wanted to hand off the controls to someone else in the room who didn’t have an iPhone or other Apple device.

At just a whisker under $500, the Bowers and Wilkins A5 may be one of the pricier AirPlay music systems on the market today, but it’s also one of the best. Its refined tonal character puts it a few steps above much of the lower-priced competition, and its bass output can be stunning given proper placement. While we wished it could also be networked for a multi-room setup, there’s no denying that the A5’s simplicity makes using it a no brainer. What’s more, its high-quality design and premium finish make it a pleasure to interact with on a daily basis. If you’re looking for an all-in-one wireless music system that’s as easy on the eyes as it is the ears, be sure to check out the Bowers and Wilkins A5.