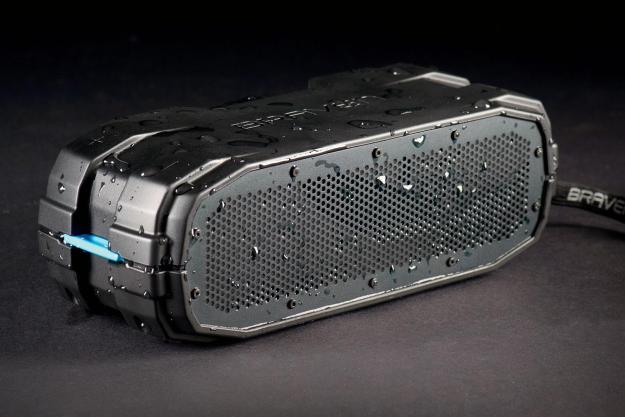 “Offering durability, portability, and top notch performance across the board, Braven’s BRV-X is one of the most impressive speakers in its class.”

Contrary to the belief of Dennis Duffy, the fictional Beeper King of New York from 30 Rock, technology is not cyclical. As we’re all aware, each new generation of products provides more features and better performance, at a dwindling price point. Thanks to a remarkable rise in the number of both manufacturers and product designs, the portable Bluetooth market seems to have taken that trend into the stratosphere, tracing incredible strides in overall performance and design within even the last year.

One of our favorite purveyors of Bluetooth baubles, Braven, epitomizes this trend perhaps more than any other company in the field. It seems virtually every time Braven releases a new speaker, it adds more features and better performance, all for an increasingly competitive price. Braven’s latest wunderkind, the super-durable BRV-X, might just be the company’s best offering yet. Here’s why:

To those familiar with the Braven product line, the BRV-X will likely incite some Déjà vu. The speaker looks almost exactly like the company’s BRV-1, only all Hulked out. Pulling the speaker from its box revealed an all-black capsule covered in a heavy shell of rippled plastic, and finished with a cap on the back that protects the speaker’s small command center like a water-tight lens cap. The speaker is heavy for its size, and feels extremely solid, further substantiated by a robust metal speaker screen at the front.

Twisting off the protective cap at the back reveals a succinct selection of inputs and controls, including a 3.5mm Aux input, a USB port for charging devices, a 12-volt power port, as well as a battery power indicator button with accompanying LEDs, a reset button, and an Audio Modes switch with both indoor and outdoor settings.

Inside the box, we discovered a power supply with a selection of regional plugs, a 3.5mm cable, a small nylon wrist strap, and a larger nylon belt with dual plastic clasps.

For the uninitiated, the BRV-X definitely makes a strange first impression. Contrary to the sleek and succinct bullet-shape of its aircraft-grade aluminum cousins, the BRV series is built for the road, from “rocky canyons” to “powdered slopes” – and it looks the part. The bulky shell surrounding the speaker conveys the era of some sort of burly alien space probe, complete with chunky ridges raised along the top, and pads along the back that resemble futuristic afterburners.

The BRV-X is built for the road, and it looks the part.

Along the top of the speaker are four primary control keys, including volume, power, and a play/pause key, which also allows song skipping and fielding phone calls from the on board speakerphone. Near the inputs in the circular back panel, there’s also an NFC pairing point for quick Bluetooth connection with compatible devices.

As we hinted at above, the BRV-X is loaded with just about every feature in the Braven arsenal. Along with an Outdoor EQ setting which boosts the treble and upper midrange for outdoor use, the speaker boasts Braven’s True Wireless technology, a feature that allows for the wireless pairing of two BRV-X speakers for true stereo playback. And the speaker’s rechargeable 5200mAh battery is designed for an impressive 12+ hours of runtime, giving you plenty of juice for both jamming out and charging up your smartphone or tablet in the wild.

The BRV-X is also loaded up with plenty of Braven’s well-honed audio components.

Under the matte black speaker screen at the front are dual “full-range” 51mm custom drivers, along with both a “subwoofer” and a passive radiator to help boost the low end and midrange for a thick, full sound. The frequency response is a claimed 80Hz-20kHz, though the speaker cuts off in the low end sharply at what sounds like a bit before that 80Hz mark.

The tank-like armor around the frame is shockproof, making it able to withstand a good tumble, even on concrete, with no ill-effects. It is also IPX7 certified for water resistance, which will allow it to provide protection against a dunk in a pool or stream.

By the numbers the BRV-X is approximately 9-inches wide, 2.6-inches high, and 3-inches deep. The unit weighs 1.5 pounds, hefty for slinging it around your wrist, but far from burdensome in a backpack or travel bag.

Although Bluetooth is becoming more reliable with each generation, we thought it worth mentioning that the BRV-X had zero dropout issues during our evaluation, and provided crystal clear streaming.

The clearest, most detailed portable speaker Braven has put out.

We’re usually not much for using these devices as speakerphones, but there the BRV-X also excelled. Even when speaking at a decent distance from the speaker, our friend couldn’t tell we weren’t actually on our cell phone, saying it sounded like we were simply speaking in a large hallway. Not perfect, but we’ll take it for a speakerphone interaction.

Finally, the speaker is brutish enough to be a non-issue in the wild or at home. Drop it off the counter, throw it in wet grass, put it by the pool. That’s what it’s for, and it’s fun to have a worry-free device.

Simply put, the BRV-X is one of the clearest, most detailed portable speakers Braven has put out. And that’s saying something. The speaker sports all if Braven’s best sonic traits, marked by a thick, rich midrange, a bright and accurate treble, and a powerful, punchy low end. The BRV-X also supplements that list with some vivid detail in the more granular details of music that’s rarely seen in the portable speaker segment.

One of the aspects that got us hooked on the first Braven speaker we reviewed, the 600, was its  meaty midrange. At the time, there were plenty of portable speaker options, but very few rose above that tinny, greeting card sound. Since then, Braven’s competitors have caught up, but the BRV-X has again raised the bar. Auditioning a wide selection of tracks from our catalog, the speaker carved out plush, thick bursts from snare drums, heavy, smooth resonance from toms and kick drums, and rich colors in acoustic guitars and vocals.

Cascading atop that bigger-than-it-oughta-be midrange was a laser sharp, assertive treble response that exposed serious detail from even our most complex tracks. Background layers of synthesizers, reverb tracks hidden in the deeper dimensions, and little subtleties like string clicks and slides were well illustrated by the speaker, especially notable in optimal listening environments. The sound is certainly bright, and occasionally the sibilant stuff was a little much, but it never got uncomfortable, and mainly served for greater clarity in the highs.

Many speakers we evaluate take near-desperate measures to coax bass from tiny cabinets. The result is often a deeper range, but that Pandora’s box can bring with it a multitude of issues, from buzzing and distortion, to physical movement of the speaker as it rumbles on a table top. Not so with the BRV-X thanks to the EQ, which cuts the low end off with near-Germanic discipline. When we played our toughest trouble track, “Before Your Very Eyes” by Atoms for Peace, the heavy bass that usually makes a mess just didn’t show up, virtually eliminated from the picture. Still, we don’t expect deep, heavy bass from a portable, and if it keeps the rest of the sound clear, we’re all for it.

Offering durability, portability, and top notch performance across the board, Braven’s BRV-X is one of the most impressive speakers in its class. Admittedly, it is a bit pricey at present, but we’ve seen that $220 number dip to $175 at Amazon, and we expect it to settle to around $200 soon. Pricing aside, those looking for brilliant sound, a glut of features, and a rugged design that can hang just about anywhere should put this speaker toward the top of their list.