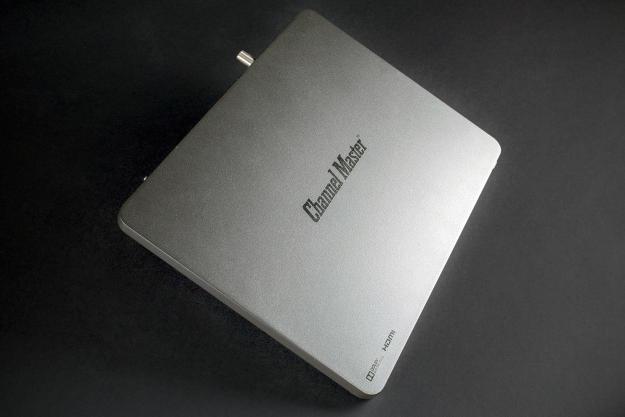 “Channel Master’s solid and reliable DVR+ may not have the latest network streaming features, but it doesn’t come with any subscription baggage, either.”

If you’re a cord-cutter, or even if you just live in an area without cable/satellite TV service, you’ve probably been searching for something like Channel Master’s DVR+. The $250 DVR+ is a dual-tuner digital video recorder that works with an HD antenna to capture and record free, over-the-air (OTA) broadcast television. You don’t have to connect it to the Internet – though if you do, you’ll get a better program guide and access to video-on-demand service, Vudu – and there are no subscription fees to worry about.

With the DVR+ you can record the beginning of a big game and catch up once you get home, pause live TV, and avoid having to wait 24 hours or more for a network TV show to show up on Hulu, just so you can watch it at your convenience.

But the Channel Master DVR+ isn’t the only OTA DVR available anymore, nor is it the most fully-featured. Competing products have been shipped by Tablo and Simple.TV that not only let users record live broadcast television, but also watch their recordings on nearly any device (not just televisions), and for less initial investment than Channel Master demands for its DVR +, too. That begs the question: Does the DVR+ still have a place carved out for itself in this emerging market?

The first thing we noticed out of the box was that DVR+ is has a startlingly slim profile. The unit measures about ½-inch high, 10.5-inches wide, 8-inches deep and weighs next to nothing (maybe two pounds? Our scale doesn’t register its presence).

It virtually disappears once you place it in a media cabinet

The DVR+’s exterior is entirely metallic, with a matte-black finish – not that it matters much, since it virtually disappears once you place it in a media cabinet or among other devices.

Aside from a remote control, there’s little else in the box. You don’t get an HDMI cable, antenna, or any other accessories unless you purchase one of Channel Master’s bundles. One such bundle includes a USB Wi-Fi adapter and HDMI cable for an additional $50.

The DVR+’s back panel features a coaxial antenna input, an HDMI output, Ethernet port, mini-optical audio output, two USB ports, a power port, and an IR-sensor for controlling the unit when hidden from sight (cable not included).

Speaking of control, the DVR+ comes with a conventional remote, which we think many users will appreciate. The aforementioned Tablo and Simple.TV devices require the use of a tablet or smartphone app for remote operation, which by extension requires an Internet connection. The DVR+ remote is familiar and mostly user friendly. Channel buttons are located along the top, cursor keys toward the middle and, unfortunately, playback controls are at the very bottom, which can be awkward at first.

There is a small amount of storage built into the DVR+, but it isn’t meant to do any significant amount of recording – at best you’ll get two hours worth of recording time. For that reason, users need to purchase an external hard drive. While this may come as a surprise to some, it a par for the course with these OTA DVR solutions; neither Table nor Simple.TV come with built-in storage.

Channel Master offers 1TB and 3TB Seagate hard drives at its website for $100 and $140 respectively, both of which can usually be found for less at sites like Amazon. Any USB-based external hard drive will do, but don’t plan on using it for anything else as the DVR+ will be formatting it for its own exclusive use.

Along those lines: The DVR+ records a file type that can’t be exported, then played back on other devices like smartphones, tablets and computers – not without a bunch of hassle, anyway. This is an important point because both the Tablo and Simple.TV will serve up recordings to network-connected devices (including Roku and Apple TV) so they can be watched on nearly anything, anywhere. Channel Master’s answer to this need is the purchase of a $300 Slingbox 500, which it promotes on its website.

Anyone who wants to watch their shows on anything other than their television screen should probably steer clear of the DVR+.

That being the case, we think anyone who wants the ability to watch their shows on anything other than their television screen should probably steer clear of the DVR+. However, it should be noted that both Tablo and Simple.TV come require either one-time, annual, or monthly subscription fees, which, no matter how you pay, raises the cost in the long term. With that in mind, those who value savings over multi-screen viewing options may be better off with the DVR+.

An Internet connection is also required to access any video-on-demand apps which, presently is limited to just one choice: VUDU. While we like VUDU very much, we really feel like Netflix and/or Amazon Prime Instant apps would be a real boon for the DVR+. Unfortunately, according to Channel Master, getting Netflix, Amazon, Hulu and other services’ apps on board with your product is easier said than done.

Getting the DVR+ up and running really is a walk in the park. Once the vital connections are made, the DVR+ has an on-screen guide that helps you get up and running. An automated channel search will find the channels you can tune into with your HD antenna, log them, and show them on the guide. Formatting a new external drive is similarly simple and takes mere moments.

For the most part, we enjoyed our time using the DVR+; its menu is simple and easy to use (if a bit rudimentary) and the program guide is immediately familiar. Scanning forward and back within a program was always smooth, and skipping in 30 second intervals made cruising past commercials easy enough. Perhaps most importantly, though, the DVR+’s picture quality during playback was excellent. We saw no compression artifacts, no dropouts, and we didn’t experience any hiccups in playback with a brand new external hard drive in place.

Don’t expect a TiVo-like experience, though. The DVR+ isn’t able to sense what kind of shows you like and automatically record them for you, nor is it able to record only new shows within a given series. In the grand scheme of things, those are really minor concerns, but those waffling between the DVR+ and either the Tablo or Simple.TV should know that the latter two have much more modern, snappy interfaces that have that bright and shiny “I was just created by a bunch of young, hip and trendy professional app developers” vibe.

Those who need a DVR to record free, over-the-air TV without the bond of a subscription should give the DVR+ some serious consideration- it’s a solid, reliable device with excellent picture quality that gets the ole’ job done. However, those seeking a more interactive interface with modern, network-based features may find the DVR+ a bit, well, too simple. Somewhat ironically, both Simple.TV and Tablo offer a good bit of extra functionality for just a bit more cash.