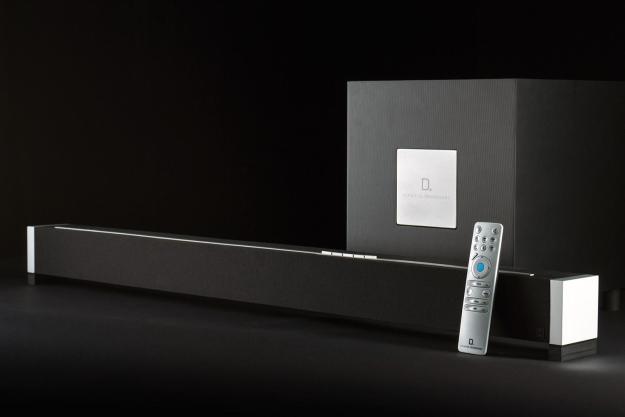 “The SoloCinema Studio provides luscious detail, brilliant balance, and enough power to transform a quiet night at home into a potent cinematic experience.”

From afar, the crowded collection of sound bars in today’s marketplace can blur into a sea of rectangular beams and side-car cubes, each promising powerful sound and compact convenience, at least on paper. Like any genre of consumer electronics, however, not all sound bars are created equal. Definitive Technology set out to underline that point with its $1,200 SoloCinema Studio 5.1.

The Studio takes a conservative track when it comes to aesthetic design, but looking closer reveals a premium exterior framing a formidable array of hardware and software beneath, including nine individual drivers inside the bar, carefully engineered digital enhancements, and 320 watts of total system power. We recently unleashed Def Tech’s creation to see if the power-packed sound bar could produce a cinematic experience from a decidedly sub-cinematically-sized package.

We see a lot of boxes moving in and out of our offices, and while Def Tech’s L-shaped box might once have seemed strange, it’s become pretty familiar. In order to pack a sound bar and subwoofer into one package, you either wind up with way too much packing material or … well, an L-shaped box reminiscent of Tetris.

Tilting the unit onto its broad side, we pulled back some flaps to find a subwoofer packed in foam, suspended above the sound bar. At 20.45 lbs., the sub seemed surprisingly light, and although the matte-black vinyl exterior looked sharp enough in the corner of the room, we expected the piece to feel a bit more solid, especially given our experience with Definitive’s subs in the past.

In comparison, the sound bar is super hefty. After heaving all 13.85 lbs. onto our TV stand, we stepped back and took in the system’s attractive marriage of elegance and simplicity in design. As we ran our fingers along the speaker screen that covers virtually all of the Studio’s front side, we were impressed with the machined aluminum ornaments that accent the otherwise smooth surface, casting textured lines of silver across the top and at the corners. We love the solid feel of the bar, but be prepared to find some serious wall anchors if you plan on mounting it.

Also in the box was an organized collection of accessories including a power supply and power cables for both the sound bar and sub, an IR (infrared) extension cable, a 3.5mm elbow adaptor to reach the tightly arranged Aux input, and a slim grey remote and batteries. Digging deeper, we also found two spacers for wall-mounting, a hardwired IR sensor, and a small tower of magnetic riser bars for height adjustment. Sadly, no optical or HDMI connection cables are included.

Not to dwell on the point, but the Studio is one of the few sound bars we’ve encountered in which the bar is much stouter than its subwoofer counterpart. Whereas the sub is light and covered in a soft vinyl shell, the bar is made with a solid, sealed MDF enclosure, accented with sharp cuts of machined aluminum, and a steel panel at the back. Visually, the two do make a nice pair, striking a sharp aesthetic in our evaluation room.

The bar itself measures 43 inches across, and sits 3.5 inches high, and just over 3 inches deep. Robust keyhole mounts are cut into the metal panel at the back, and at the center is a small cubby which provides access to the Studio’s deep collection of inputs. Cut into that tiny enclosure are both analog Aux and digital optical inputs, a USB input for firmware upgrade, an HDMI output, and 3 HDMI inputs. The broad options effectively make the Studio a surrogate A/V receiver, allowing you to plug in 3 HD components, and route video and audio to your TV straight from the bar (so long as it’s powered up).

The Studio is one of the few sound bars in its class without an ARC HDMI connection which, among other things, allows devices to automatically accept commands from an ARC enabled TV’s remote control. Instead, you can program your TV remote from the system menu to relay basic commands to the bar, including volume, mute, and power. There are also two ports at the back for both IR input, and IR repeater output.

Under the skin, the bar harbors 9 different drivers, including a trio of pure aluminum 1-inch tweeters, and six polymer composite 2.5-inch woofers, each powered by its own separate channel of Class-D amplification. Total system power for the bar is claimed at 120 watts.

The bar’s wireless partner in crime hosts a downward-firing 8-inch long throw driver, in a ported enclosure. The sub automatically links to the sound bar on the 2.4 Ghz wireless frequency, and is powered by its own Class-D amplification pushing 200 watts. The cabinet is a perfect 12.5-inch cube, and rests on small rubber feet, raised a few inches above the ground.

Control of the system can be accessed from the small control panel along the top which covers basic functions like power, source, volume, and mute. But most of the control will be handled by the grey remote, which provides individual keys for each source, control of bass level, image configuration, and basic commands like volume and mute. Utilizing the system’s HDMI output allows you to access the menu from your TV, or you can follow its basic LED light display along the front panel.

Along with the Studio’s heavy lineup of hardware, the system also boasts an array of digital processing features, including 5.1 virtual surround, DTS and Dolby decoding, Bluetooth with NFC pairing, and other surround features with fancy names like Active Vector Response Curves and Spatial Array with Interaural Crosstalk Cancellation. While the system did a first-rate job of balancing heavy and softer scenes for the most part, the Night Mode also allows for Dolby-produced dynamic compression to close the gap.

Connecting the Studio to your system is easy enough, apart from the fact that the inputs are corralled into a very cramped port section. Once we finally got our TV’s HDMI input cable fitted into the system’s stubborn HDMI output, we hooked up a Blu-ray player to one of the three HDMI inputs; we were then ready to rock. This is the configuration we recommend for optimum sound quality, but if you’d like to use your TV as the hub instead (or you’ve run out of HDMI inputs) you can also connect via a digital optical input, or the 3.5mm analog input, should your TV be getting a little long in the tooth.

Once connected via HDMI, we were able to easily program our TV’s remote to control basic system commands via the Studio’s on screen menu. We chose Movie mode as our preferred mode for all content. From there we also selected our ‘immersion level’ for the virtual surround effect, which is on a 21-point scale from -10 to +10. We kept the system on the default level of +10.

For music playback, we initially connected via the Bluetooth connection. However, we discovered early in our evaluation that the hardwired connection via the sound bar’s auxiliary input was slightly superior. We’ll discuss this more below.

We began our session by cuing up the classic chase scene at the onset of Cameron’s Terminator 2, and the SoloCinema Studio lived up to its name almost immediately. It’s not often we feel such cinematic, heart-racing pulse from a compact home theater system, but after the epic explosion of the T1000’s stolen big rig, we were hooked. Not only did the subwoofer slam the room with rigid waves of force, but the sound bar also held its own deep into the lower register, rippling forth the fat undulations from Schwarzenegger’s Harley, the powerful blasts from his sawed-off shotgun, and the heavy percussion of the soundtrack, all in perfect balance.

While the Studio certainly can’t replace a true 5.1 system (no virtual solution can), we noticed some convincing surround effects during T2. Navigating through Cameron’s dark universe, we occasionally heard echoes and effects far outside the domain of the bar, or layered deeply into the soundscape, as if it was creeping up from behind us at times.

It’s not often we feel such cinematic, heart-racing pulse from a compact home theater system…

As we continued to journey through our Blu-ray collection, action scenes were a joy to take in. We found ourselves glued to another dramatic chase scene (it really is the best way to begin a movie) at the intro of the latest Bond flick, Skyfall. Again, the rumble of motorcycles was visceral and textured, and the gun shots were palpable, exposed in a particularly attractive display of the squashed punch to Bond’s Walther PPK. All the while, the Studio handled the thematic score of heavy percussion and shimmering cymbals rolling underneath with accuracy and precision.

It was when the action simmered to a dull lull, however, that the Studio really proved its quality. Especially evident in Skyfall’s exquisite sound production, dialog was nothing short of gorgeous. Soft, rich nuances came from the character’s lips as each consonant was outlined with a defined, yet subtle touch. The gritty timbre of each individual’s voice was also brilliantly revealed. While many sound bar systems merely manage to spice up raucous moments, the Studio is one of the few systems we’d turn to for all content that passes through our home theater.

We found ourselves nearly as impressed with the Studio when we turned the system to our music collection, especially when we auditioned high-resolution content via a digital connection (HDMI or Optical). The system provided excellent dynamic range, clear and vivid cuts to cymbals and high percussion, and a powerful display of rich color from the midrange down to the doldrums of the sound. However, that analysis comes with some caveats: With an analog connection, music is not quite as vivid, and with low-bitrate files (192k and lower) the Bluetooth connection’s inferiority to a hardline connection through the system’s 3.5mm Aux input is much more pronounced.

To be clear, for the majority of listeners, the system’s music performance will be just fine for casual listening. Those who might use the sound bar to pump up the jams while doing house work or entertaining guests should be pleased as punch. However, given Definitive Technology’s excellent reputation, we can see how an audiophile who is looking to this sound bar as a compromise for a high-end audio system might expect a little more detail and more accurate stereo imaging. In the rare instance that music would be the primary source material for a sound bar, we would suggest considering  the Paradigm Soundtrack as an alternative. However, if movie and TV content will get the lion’s share of your sound bars attention, the SoloCinema Studio is a superior choice; it is absolutely spectacular in that regard. Those leaning toward this sound bar already should feel comfortable pulling the trigger.

Definitive Technology’s SoloCinema Studio provides luscious detail, brilliant balance, invigorating bass and enough power to transform a quiet night at home into a potent cinematic experience. Although music reproduction didn’t match up exactly with the Studio’s movie and TV prowess, we’re still talking about a seriously premium listening experience here. Overall, this sound bar brought out the best in everything we watched, making it a top-notch contender as a compact home theater solution.