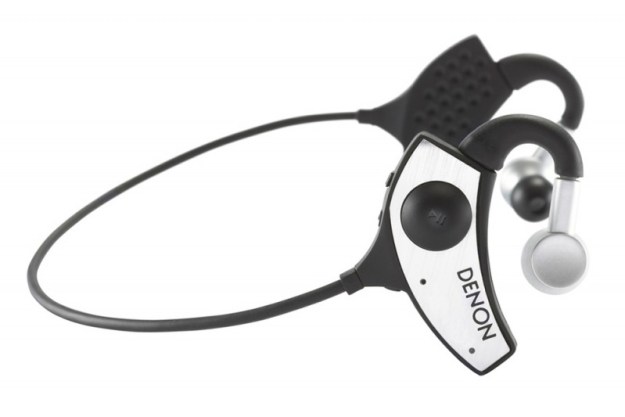 “We appreciate Denon’s effort at lending its signature sound to what stands as a disappointing wireless in-ear headphone market, but while its concept is sound, its execution in the AH-W200 leaves much to be desired.”

When it comes to technology, cutting the cord is something we’ve fantasized about practically since we first plugged in. In recent years, this increasing drive to unshackle from our devices has manifested some of the tech industry’s most vibrant and innovative new gear. From omniscient phones and miniaturized portable jukeboxes to augmented reality glasses, our thirst for better and smarter wireless technology is seemingly unquenchable.

Not surprisingly, Denon has honed in on this trend with its latest line of headphones. The new AH-W200 Globe Cruiser Bluetooth headphones (offered at $180), are an attempt to bring a new level of convenience and freedom to wireless in-ear headsets. In place of a wired dongle, Denon has embedded hardware and controls directly into the W200’s earpieces, creating a feature packed, autonomous halo of sound.

Yet, as with any new device, there are obstacles to overcome. We wondered just how well stuffing all of that technology into a cramped space would work. And more importantly, would there be any room left over for some decent audio? We recently strapped on the W200 for a thorough test to find out. Here’s what happened.

Opening the W200’s book-shaped box revealed two black and silver earpieces laying in hard foam, tethered together by a single rubberized cable. Directly below the headphones was a thin, black carrying case with a clip-on carabiner, a package of silicone and foam ear tips, a mini USB to USB charging cable, an airline adaptor, and a proprietary headphone cable.

The W200’s design is kind of clunky for a modern piece of gear, though not unlike most of its competition in this space. Those who shied away from early generation Bluetooth calling devices due to their “look-at-me-I’m-a-techy” vibe will likely find Denon’s duo of bulky earpieces similarly unappealing. Thankfully, the headset does not include the incessant blinking LED those early devices did.

Each of the W200’s twin earpieces is composed of a thick mold of curved plastic, adorned with a silver reflective plate, and capped with a rubberized control button. The button on the right earpiece controls power, pairing, and play/pause, while the left button controls basic call functions. The rubberized arm at the top hugs the ear and loops down to attach the headset’s silver earbuds. Each earbud slides up and down on a telescopic tube that extends from the arm, and rotates about 45 degrees on the horizontal axis for adjustment. The tips extending from the beveled earbuds house relatively large 11.5mm dynamic drivers.

As mentioned above, Denon has packed all of the W200’s hardware and controls into the earpieces themselves, with the right earpiece taking on most of the heavy lifting. Aside from the power button and two volume control buttons, the earpiece also houses the proprietary port for hardwiring to your device, the charging port, and the pinpoint microphone, located on the bottom edge. A small LED on the earpiece indicates states of charging, power, and pairing with shades of red, purple, and blue respectively.

Though we applaud the effort to centralize control, we found using the onboard buttons while wearing the headset a hassle, especially thumbing around the back of our ears for the volume buttons. Using our iPhone for control was much easier, and since the headset gave us an extremely low range of operation (10-15 feet) we were never far from our device anyway.

The W200 pairs easily by holding down the power button, at which point it becomes available in your device’s Bluetooth menu. The headset employs the relatively current Bluetooth version 3.0 which offers speedy signal transference with low power output, allowing the W200 to deliver a moderate 5 hours of playtime per charge. However, as we have discovered, there is more to a clean and consistent wireless connection than adopting the latest protocol.

The final “link” in the W200 chain is the vinyl cable that connects the earpieces. Though it’s a necessary evil, we wished it was adjustable and more flexible. Living in the Northwest, our daily uniform of bulky collars and hooded jackets often collided with the wire, dislodging the earbuds from their seal. Even with a T-shirt on, simply raising the head can occasionally cause the cable to catch against your neck.

Getting the W200 to fit correctly over the ears can be a time consuming affair, never mind getting the earbuds properly situated inside the ear canal. After a bit of practice, we were able to take the headset on and off with relative ease; and it was relatively comfortable once in place, if not a bit awkward. Still, the earbuds made our ears pretty sore after an hour or two.

As we’ve come to expect from Denon, there is a lot to like about what the W200 offer sonically — when they work properly, anyway. We tested these headphones using a large selection of musical genres from our catalog on our iPhone 5 (via Bluetooth for the majority of our listening), and discovered a pleasant sound signature, notable for its smooth, caramel-ly low end and clean upper register. While we didn’t experience the level of detail and depth we expect from elite, wired in-ear headphones such as the Audiofly AF-78 or the Nocs NS800, the sound was well balanced with plenty of clarity. Unfortunately, the AH-W200 is plagued with wireless-related performance issues which trump their potential for excellent sound quality.

At times, it sounded as if we were attempting to make a call from inside the Matrix.

Our first indication that the W200 had wireless audio transmission issues came from the headphones’ tendency to distort the bass (rather significantly, too) at higher volumes. Having never encountered such an issue with other Denon headsets, we ran a little experiment by turning down the W200’s onboard volume and pushing our iPhone’s to the max. Here, distortion was at its worst. However, when we reduced our iPhone’s output to 75% and maxed out the W200’s volume, we experienced no problems, pinpointing the problem as signal distortion, rather than driver distortion.

We were able to easily remedy the bass distortion and other inherent frequency issues (such as a weak band of upper midrange response), by playing music via Denon’s extremely intuitive iPhone app. Through the free app, you can access all of your music while utilizing a fully programmable 10-point graphic EQ and volume limiter, which provided a smooth tone and completely removed all bass distortion.

Sadly, though the graphic EQ appeased our inner control-freak to no end, it did little to distract us from the headset’s increasingly apparent Bluetooth maladies. When placing phone calls, the W200 rendered our voice with bouts of thin, echo-laden distortion, while voices on the other end were often incoherently garbled with digital aliasing. At times, it sounded as if we were attempting to make a call from inside the Matrix. More often than not, we just wanted to disconnect the headset and pick up the phone.

We also experienced inconsistent connection issues while listening to music. Regardless of the proximity to our source device, we experienced multiple instances in which sound would just cut out for short blips. We also picked up on a near-constant low-level hum in the right earpiece. All of that coupled with a short wireless range left us wondering what was so bad about wires in the first place.

We appreciate Denon’s effort at lending its signature sound to what stands as a disappointing wireless in-ear headphone market, but while its concept is sound, its execution in the AH-W200 leaves much to be desired.

For now, if you still have the “need to be freed”, we recommend you check out the Phiaton PS 20 or PS 210 BTNC, though you’ll have to deal with a wired clip-on control piece. We hope Denon can solve some of the wireless-related issues we experienced in its next generation of Bluetooth in-ears.

Topics
Video-editing app LumaFusion to get a Galaxy Tab S8 launch
The best headphones for running in 2023
The best Dolby Atmos soundbars for 2023
The best Blu-ray players for 2023
The best speakers for 2023: great hi-fi options for music and more
Samsung accidentally reveals price of its 77-inch QD-OLED TV
The best QLED TVs for 2023: bring on the brightness
The best OLED TVs for 2023: from LG, Sony, and Samsung
The 50 best movies on Netflix right now (January 2023)
The best movies on Amazon Prime Video (January 2023)
The best new shows to stream on Netflix, Hulu, HBO, and more
The best TV shows on Amazon Prime right now
Best new movies to stream on Netflix, Hulu, Prime Video, HBO, and more