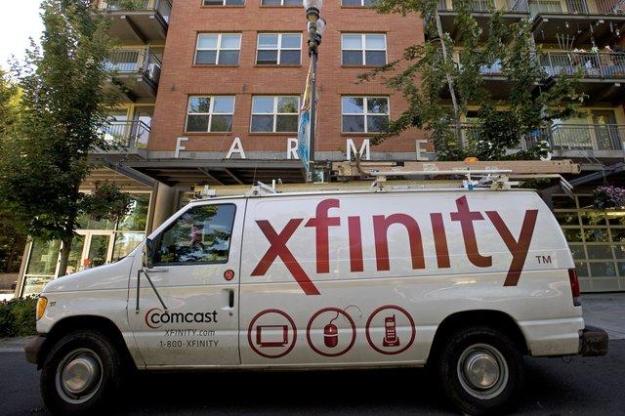 Recently, Netflix CEO Reed Hastings pointed a finger at Comcast for promoting its Xfinity on-demand services over competitors’. Comcast — and other ISPs — have been a thorn in streaming services’ sides, one of the many complications we’ve come across attempting to disrupt the video content market. But there are undeniable tangles in controlling a service and promoting your product. At the same time, Comcast has the right to compete.

For this week’s edition of DT Debates, Staff Writers Jeffrey Van Camp and Caleb Denison duke it out over whether Comcast is unfairly punishing its rivals or is simply exercising its free market rights.

I will keep my first response short and simple. I do not believe Internet Service Providers — whether they be wireless carriers like AT&T or DSL/Cable providers like Comcast or Verizon — should be allowed to own or offer entertainment or content services. They should be treated like utilities. I’m happy if they offer new types of Internet services, but the moment companies like Comcast begin owning and running their own entertainment services, they hurt the open Internet (and Web).

This problem is quite evident today with Comcast’s preferential treatment toward its own Xfinity app over competition like Netflix and Hulu. It was also one of the major reasons why we didn’t have an app revolution until Apple forced it with the iPhone. Wireless carriers used to restrict and control the Internet and almost all functionality on wireless phones. Now today, thanks to a lack of Net Neutrality and backroom deals, carriers like Verizon Wireless are allowed to block apps like Google Wallet because they compete with NFC services they plan to provide. These are just a couple examples.

There is very little good that comes from an Internet Service Provider engaging in these types of businesses. It can also lead to stifled Net innovation down the road because they want to protect the revenue they gain from their own vested services.

I must confess, Jeff, I don’t relish the responsibility of arguing the case for ISPs like Comcast because, frankly, I don’t like them . But this isn’t about likability or even “fairness” (whatever that is); it’s about rights. These ISPs are perfectly within their rights to offer competing content services.

Let’s ride this Comast wave for a minute. As you and Netflix CEO Reed Hastings (who’s never been known to jump the gun, has he?) would argue, Comcast is giving its subscribers “better access” to its Xfinity app than its competitors’ by not counting data consumed via Xfinity services against its subscribers’ data usage cap.  Frankly, I don’t see the problem. It’s not just Hulu or Netflix and other video-on-demand services that will cost you data. It’s anything that requires data. That includes shopping at online retailers, Skyping with your grandma, mapping out that road trip for your next vacation, or even visiting Digital Trends to read this hearty debate. Should Digital Trends be pissed at Comcast because its customers might be enticed into watching When Harry Met Sally for the 36th time rather than catch the latest episode of DT Daily? No. That’s ridiculous.

I’m not arguing that they don’t have the right to do this. If it were illegal, then Comcast wouldn’t have been able to launch Xfinity in the first place. I’m saying that it probably should be illegal. Currently, it’s just bad for everyone but Comcast.

I’ll take your Comcast focus and run with it. You say that it isn’t just Netflix or Hulu that should be upset that Comcast is giving free access to its services while charging users bandwidth (and charging Netflix for bandwidth) to do anything else on the Internet. Netflix is a focus here because it currently uses up more bandwidth than almost anything (30-percent of Net traffic during peak hours, I’ve read). If someone watches Netflix as much as some people watch cable TV, they could potentially hit Comcast’s 250GB bandwidth cap for a month and lose their Internet service or get charged. But if that same user had watched all those hours of video on Xfinity, they would be free and clear. How is that fair?

Digital Trends should be just as mad as anybody. The only reason we aren’t is because our Website takes up so little bandwidth and isn’t a direct competitor to Xfinity. You want to make it affect us? Well, what if Comcast buys a tech site tomorrow and funds it with millions of dollars to build it out of nowhere (We just saw The Verge appear out of thin air, after all) and then uses its Internet power to give all its users special access with no penalties to this service? Then what if Comcast decides to lower its bandwidth cap to 100GB or 20GB or less? Comcast can essentially kill competition with the power it wields as an Internet utility combined with the ability to enter new Internet businesses.

And if you don’t think any of this is wrong, Reed Hasting’s claims have already attracted the attention of the FCC as an issue of Net Neutrality. When companies like Comcast, which are essentially utilities, can expand to new kinds of businesses, it only leads to more infractions like this and a less vibrant market.

I’ll take your four paragraphs and see them with two:  I enjoy picking on Comcast as much as anyone. It just so happens that I am a disgruntled Comcast customer myself (perhaps that is why it is easier for me than you to see a couple of glaring holes in your argument). While streaming content through Xfinity’s app –be it via my Xbox, iPad, or iPhone—may not count against any data cap in place on my Internet service, it is most certainly not free. Unless you pay for Xfinity TV service, that app is useless for viewing content. The digital starter package in my area starts at $30 if you’re a new customer, then jumps up after the first 12 months –and that doesn’t even include the Streampix service. Imagine the backlash that would arise from Comcast’s customers if the programming on Xfinity’s Streampix service, which can be viewed just as easily on any TV in the house, did count against the data cap. That’s paying for the same service twice or even thrice, depending on how you look at it.  People would be irate because they are already paying for access to this content. They shouldn’t be charged extra just because they choose to use their Xbox to watch instead of their cable box.

Secondly, the remainder of your argument assumes that Comcast has a monopoly on all Internet and programming access in every corner of the country. It doesn’t. It just serves it up better than most. We have choices when it comes to who provides our Internet and TV services. If we don’t like it, we can pick something else.  To use myself as an example again: In my area, I can get Internet service from Clear or Century Link if I want. If I really wanted to stab myself in the eye, I could even opt for broadband services from Dish Network, which could also serve my TV needs as well as DirecTv. Sure, services like Century link don’t care what I’m using my Internet for, be it Netflix, Hulu, Cinema Now, or Vudu, but the service is slower and it doesn’t serve my TV needs at all!  How inconvenient! Oh, yeah…that’s right…we have to pay for convenience. That’s what Comcast is doing: charging for its convenient services in a free market. How very un-American of them.

If my argument has holes, you certainly haven’t found them. You say that if Comcast users are charged for Xfinity and then have to abide by the bandwidth cap from Comcast, they are getting double charged, but you forget that all Netflix customers have to pay a monthly fee too, and Hulu Plus users. HBO Go users actually have to pay for a full cable subscription and HBO just to get access to that app and they are being charged bandwidth for watching that service as well. Comcast services shouldn’t get a free ride because they’re daddy owns the railroad. That’s actually a horrible metaphor since I’m sure rich kids do get free rides, but railroads don’t have Net Neutrality rules and expectations. The Internet does.

Yes, Comcast is just one Internet provider, but the problem is that almost all of them are starting to barge into the content business because they have to compete with Comcast. It sets a horrible precedent. So no matter who you choose, someone is getting screwed a little. And you can’t disregard the fact that a good portion of this country doesn’t have options at all. There are many markets where there is only one viable broadband provider or only one viable wireless carrier. Things may improve with time, but the level of competition is not nearly where it would need to be to enable a free enough market where the actions of giants like Comcast don’t matter. Even then, ISPs have an incredibly sacred role. Our entire society runs on the Internet now. If ISPs don’t deliver it fairly, then we all end up suffering in the long run.

Enjoy your damn Xfinity. I’m going to imagine all the new lines of business and innovative ideas that could prosper if the companies that delivered the wired and wireless Internet in this country were forced to treat all data equally and simply deliver the Internet, not try to Bogart it.

Oh, Jeff, you are a crafty little devil. I like it. However, on principle, I can not abide your attempt to twist my point to serve your argument. Actually, when looked at through a clear lens, we can see that you reinforced my point. To further mangle your already (self-admittedly) horrible metaphor, I have to point out that it is actually Comcast’s customers that are being taken for the proverbial “ride.” People pay an access fee for video-on-demand sevices from one side of their wallet, then pay Internet fees from the other side. The situation is no different with Comcast. People who consume Comcast’s content simply have more options for doing it (convenience feature) and, admitedly,  get railroaded in the process. Nevertheless, consumers elect to choose Comcast; they aren’t forced into it. Comcast is guilty of some slimy, sly, shrewd, and greedy practices, but I can’t argue that a stop should be put to it because they aren’t shutting competition out…yet.

Honestly, I think it is shameful that we would argue over such first-world problems but, you’re right about one important thing: We run on the Internet now. Because of that, we need to stop bickering over the smaller details like how much we think we should have to pay for TV and who gets to serve up the content and focus our efforts instead on the bigger issue: We need solid, clear and enforceable legislation that preserves Net Neutrality and we need it right now.  As it stands, the rules that do exist are a bit dubious and, to make matters worse, are being contested by these huge companies that I know we both hate. Luckily, no ISP that I’m aware of has successfully managed to slow down internet access to content competitors –which, I think we would both agree, would absolutely be a violation of net neutrality

ISPs beng involved in providing content doesn’t constitute a violation of net neutrality on its own, but it is clear evidence  they don’t have much respect for the notion  and, I believe, that puts us all on a very slippery slope indeed.