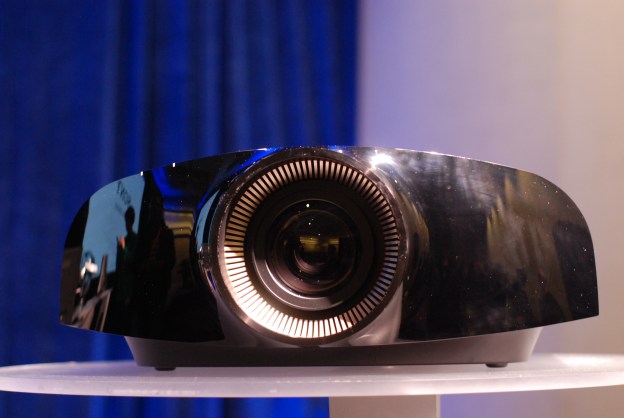 Yesterday’s press conference with Sony had us googly-eyed over impressive demonstrations of various 4K resolution material, but the projector at work in the back of the room was Sony’s commercial 4K projector and not the VW1000ES. In order to see the highly buzzed about projector in action, we had to visit Sony’s demonstration booth this morning.

As it turns out, today’s presentation using the VW1000ES was a lot like yesterday’s press presentation, replete with power-point slides and a good amount of jibba-jabba. Toward the end, though, we got to see three real demonstrations of the new home theater-friendly 4K projector’s prowess.

First, we saw a side-by-side comparison of digital still images projected through both the VW1000ES and a “competitor’s projector.” The idea here was to show the lack of screen door effect and the “obvious difference in uniformity of texture.” The problem is, the differences were not all that obvious. With serious scrutiny, the differentiation was visible, but we couldn’t help but think about how difficult it might have been to see them without extended viewing of still images and the presenter’s fancy “pointing finger” laser pen.

Next, the VW1000ES was put to work upscaling a clip from Resident Evil. We’re pretty sure the rest of the room saw what we saw, since we heard no murmurs of approval. To be frank, it was a pretty terrible demonstration. The film had a monochromatic look to it that lacked depth and the effects of the projector’s motion smoothing processor were both obvious and annoying.

The last clip we viewed was from Sony’s forthcoming film, The Amazing Spiderman. Since it was native 4K content, it was, as you might expect, pretty amazing. Colors were beautiful, skin tone was excellent, black level was top notch and the image had tremendous depth and texture.

So, when fed with elusive 4K content, the VW1000ES delivers the “real theater” experience in spades. But we still think the lack of 4K content makes the projector’s availability a little less exciting, considering its hefty price tag and lackluster 1080p upconversion. Keep your fingers crossed that Sony Pictures delivers on its promise of tapping its 4K library soon.

Peacock does away with free tier for new subscribers
Klipsch follows the success of The Fives with The Sevens and Nines powered speakers
Marshall’s latest Bluetooth speaker has four drivers for 360 sound
The best waterproof Bluetooth speakers for 2023
This 75-inch 4K TV is $300 off in time for the Super Bowl
The best movies on Apple TV+ right now (February 2023)
What’s new on HBO and HBO Max and what’s leaving in February
The best documentaries on Netflix right now
What’s new on Amazon Prime Video in February 2023
Super Bowl 2023 halftime show: who’s performing?
The best indoor TV antennas for 2023
The best VPN for streaming for 2023
Showtime is being merged into Paramount+