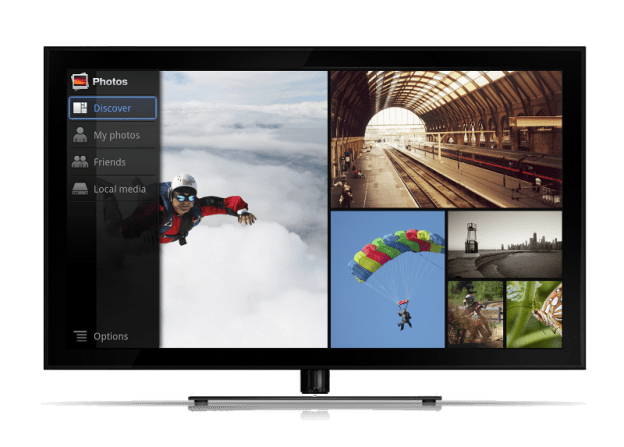 Google has been hard at work trying to improve Google TV. And despite some extremely-well documented issues (most notably being called a “gigantic mistake” by manufacturing partner Logitech), the interface refresh has been well-received.

Google is really trying to stay the course with this one and weather the ensuing storms, and that commitment is playing out today with updates to Google TVs YouTube and Photo applications. Much of the YouTube update is similar to the site’s update, making the UI more personalized and putting focus on your playlists. Which, we assume, will become increasingly important as Google continues to turn YouTube into a professional platform.

The Photo app has a new tool called Discover, which is something like a screensaver of your uploaded images as well as those from your Flickr and Picasa accounts. It creates a slideshow of these pictures either to find old memories or as background.

These aren’t exactly necessary updates, but they do improve the software. But really, the heart of the problem lies in contentious relationships with manufacturers and content rights holders. Until both of those can be straightened out, Google TV will stay stuck in limbo. On a more positive note, it could be part of an upswing: Samsung said it will release Google powered TVs next year. And after last year, it might be smart for Google to take some baby steps like a UI refresh and app updates.

The YouTube watching experience on TVs just got much better
Google TV tips and tricks you need to start using now
The best Roku TVs of 2022: which should you buy?
Google’s new Chromecast is cheaper, tops out at HD resolution
How to watch Pittsburgh Steelers vs. Cleveland Browns on Thursday Night Football
The best wireless earbuds for 2022
Thursday Night Football stream struggles continue for Prime Video
The best 4K TVs for under $500: premium picture on a budget
The best speakers for 2022: great hi-fi options for music and more
Nothing teases its next wireless earbuds with photos of a lipstick-like case
Best new movies to stream on Netflix, Hulu, Prime, HBO, and more
The 70 best movies on Amazon Prime Video (September 2022)
The 50 best movies on Netflix right now (September 2022)