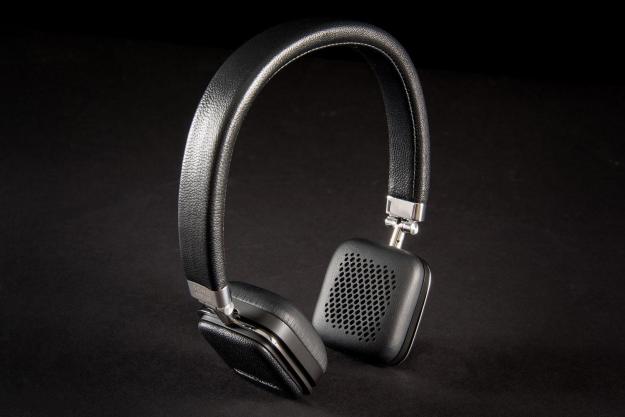 “The Soho Wireless’ sound is more heavy than potent, leaving something to be desired at both extremes of the spectrum”

The iconic Harman Kardon is perhaps just as known as well for its sleek and innovative product design as it is its storied sound quality. From the satellite dish-shaped Onyx Studio speaker to the elegant mix of modern and classic styling that is the CL headphones, H/K has proven it can do design.

For the most part, Harman Kardon has admirably backed up its superlative styling with on-par performance. But a recent run-in with a compact wireless speaker called the Esquire Mini — which sounds as thin as it looks — made us wary of what we might find beneath the covers of H/K’s latest headphone effort, the oh-so-chic Soho Wireless. It turns out we were right to be concerned, because while the Soho Wireless might be the most intuitive and stylish cans in their class, we were once again left wanting more when it came to performance.

The Soho Wireless come elegantly folded up in hard foam beneath a stout cardboard cover, which opens with the pull of a ribbon. If there’s another pair of wireless headphones on the market that better exude class, minimalism, and simplicity in design right out of the wrapper, we haven’t found them.

Buried under the top layer of the box is a saddle bag-style carrying case with a magnetic lid, with a manual, and fabric-sheathed cables for charging and wired connection hidden inside.

As stylish as the Soho Wireless are, perhaps the strongest characteristic of their design is just how functional and easy to use they are. As mentioned, the ear pieces slide smoothly on their sparkling steel arms for easy extension when fitting them to your ears, and it’s just as easy to fold them into a brilliantly compact package when it’s time to put them away.

A half inch of padding on the headband would’ve transformed the fit from passable to plush.

The square earpieces offer a fit that’s just slightly awkward on your rounded ears, but the pads are ample, and the pieces rotate to just about any angle, and lay completely flat for storage. Thanks to HK’s sharp focus on saving space, these already diminutive cans take up around half the space when tucked away, losing out only to the teeny V-Moda XS as the most compact headphones we’ve traveled with.

A Bluetooth connection makes the Soho Wireless all the more convenient to cart around, and wearing them around the neck makes for an easy way to bounce back and forth between music and the world around you. Hidden at the underside of the right earpiece is the only traditional button on board, which is held down for Bluetooth pairing, and controls power with a tap. Right next door is a 3.5mm input for hardwiring the headphones, and a flap that hides a micro USB charging port.

The rest of the controls are handled with simple gestures on the right earpiece’s exterior surface. Tapping the leatherette surface once controls play/pause and calling, while volume and song skip are controlled by sliding vertically or horizontally respectively. It’s an intuitive system that we’re glad to see increasingly adopted in the headphone world.

The Soho Wireless’ source of sound are two 30mm drivers with a claimed frequency response of 20Hz-20kHz. Other features include NFC touch pairing and aptX codec support for CD-quality streaming from compatible devices. The rechargeable battery on board offers right around 6 hours of runtime, depending on volume levels.

The Soho are pretty comfy on the ears once you get the square pads situated, though it can take a while to get the earpieces to cooperate. Our only real complaint, however, comes from the leather headband, which offers very little in the way of cushioning. Half an inch of padding up top would’ve transformed the fit from passable to plush. We also wished for more passive noise isolation, which was disappointing, even for an on-ear headphone.

Why you gotta break our hearts Harman Kardon? As fetching as the design is, the Soho Wireless’ performance just doesn’t match up. If we’re to use the parlance of our times, we’d have to describe the sound as “urban.” With a heavy push in the bass, and a soft and muddy lower midrange, they certainly sound like they’ve been crafted to compete with Beats models — not exactly an original idea.

As fetching as their design is, the Soho’s performance just doesn’t match up.

That’s a surprise, considering that the Soho Wireless’ style seems to fall under another one-word label bandied about in the tech world: “executive.” But honestly, we find either of these labels a little insulting. No matter what design aesthetic you choose, everyone wants rich, present, and nuanced sound that delivers the music clearly. An accent on the bass shouldn’t be traded for detail or clarity up above. That’s something Sennheiser has proven with its Momentum and Urbanite headphones (there’s that word again), and it’s a lesson both Beats and Harman Kardon should take to heart.

But enough soap boxing, suffice it to say that the Soho Wireless simply underperform. Even if bass is your main focus, the Soho’s sound is more heavy than potent, leaving something to be desired at both extremes of the frequency spectrum. That said, there is certainly some clarity up above — a light touch that sparkles through in cymbals, upper synths, and woodwinds. Songs like the Beatles’ Savoy Truffle offer a rich and creamy foundation, and a golden glint to the crunchy saxophones that really satisfies.

But the weighty presence of the midrange is hard to overcome on any but the lightest of recordings. Everything from Smashing Pumpkins to Rodrigo y Gabriela comes out layered in chocolate sauce and molasses down below. There’s far too much cloud cover over the bass and kick drums, which in turn crowds the vocals, and sands the tip off of instrumental attacks. Hard-panned tracks at the sides of the stereo image offer better clarity, but there just simply isn’t enough detail or definition here to keep up with the price tag.

And yet, despite our displeasure with the sound, the headphones are so easy to use we caught ourselves keeping them on long after we’d finished our evaluation. Is there anything more convenient than swiping through a tracklist with your finger while your phone is in another room?

We just don’t understand why the Soho Wireless couldn’t sound a bit more like the excellent CL headphones. Keep the design, keep the wireless, and swap out the sound, and you’d have a serious winner in our book, Harman Kardon.

Harman Kardon’s new Soho Wireless headphones are rich with innovation and style, but it all comes to a halt when you crank up the heavier tunes. There’s a solid design here that hints at greatness, but the sound is simply lacking. The bottom line is, we love the Soho Wireless, but they’ll need to sound better in the bottom end to bag our hard-earned cash.