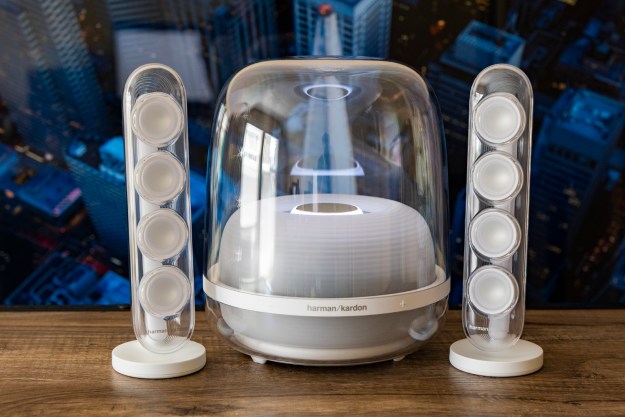 The Harman/Kardon Soundsticks are classic. I can’t say I personally owned any of the prior iterations that have been released dating back as far as the year 2000, but I can say I knew someone who did. In college, these were the computer speakers to own.

But 20 years after they first hit the market and with some updates to keep them relevant, how do the new $300 anniversary edition Harman/Kardon Soundsticks 4 hold up? The design is unique and largely unchanged since the original, but how well do they work and, more importantly, how do they sound? Let’s get into it.

The Soundsticks 4 are packaged very simply, and I would argue this is a good thing. Though they launched initially along with the iMac back in 2000, Harman/Kardon has not seemed to continue on the packaging trend Apple is on with hard cardboard and a ton of plastic. While there is some here, the main box and interior packaging is all standard cardboard and foam, which kept the Soundsticks safe in their travels to me. It’s not particularly sustainable packaging, but it’s not the worse we’ve encountered either.

The Soundsticks 4 ship with a left and right four-driver speaker unit, the subwoofer, a power cable, and that’s it. Considering these are computer speakers first and foremost, I found it odd that Harman/Kardon did not ship these with a 3.5mm audio aux cable, especially since the Soundsticks 4 accept the hard line-in. Out of the box, the only immediate connection option you have is Bluetooth, which works but to me isn’t ideal. Sure, I like Bluetooth, but as a video editor in a past life, I have a hard time trusting wireless connections when engaging in critical listening. Television companies have set themselves up so that it’s well known that you don’t typically get an HDMI cable in the box, but computer speakers have no such expectation. If you’re going to provide the input, provide the cable.

If you were not familiar with the Soundsticks prior to this version, they have always had this transparent build to them that originally looked great for the time and especially with the iMac they were designed to pair with. But 20 years later, the emphasis on using see-through plastic with electronics has significantly faded. It’s not a bad look by any means, but in 2020 the design aesthetic is extremely uncommon and likely polarizing.

For example, on a video call with the Soundsticks in the background behind me, someone legitimately asked me if they were a humidifier.

Thanks to the white and gray used throughout, I think the design has aged pretty well.

But I kind of like them. Next to a 27-inch iMac, I personally think they don’t look bad at all. Compared to the original, the Soundsticks 4 use significantly more non-transparent parts, which excellently frame the clear pieces. I think if this entire system was as see-through as the original back in the year 2000, it would be pretty garish, but thanks to the white and gray used throughout, I think the design has aged pretty well.

Harman/Kardon continued a curious design choice with these: All three pieces are very clearly meant to sit on top of your desk. The left and right speaker units have no controls on them to speak of. Instead, those are located on the front and back of the subwoofer. Volume, which I suppose you could just control from your computer, is toggled by two raised white buttons on the front of the sub, while the power and Bluetooth connect buttons are found around back. Additionally, changing volume, powering on, or connecting to a Bluetooth device all produce a different glow from the LEDs inside the subwoofer, which means you’re very clearly meant to see it illuminate, which you probably wouldn’t notice if it was in the typical subwoofer position of on the floor under the desk.

I suppose the idea is that you would not want to “hide” the subwoofer under the table because of the design, but it’s not particularly practical. The sub is quite large, which means it will occupy a big portion of your desk space. I don’t know about all of you out there, but my desk isn’t particularly expansive. It’s large, but when you put my laptop stand, my monitor, and my podcasting microphone up, there isn’t a lot of room left for other items. The left and right speaker arrays are luckily quite thin and easy to hide, but the subwoofer is going to take up a lot of space. The sub is also powerful, which means you definitely can feel it shaking the table when it plays music. I’m not a big fan of that when I’m trying to work.

I may point out the lack of an aux cable and the need to have all three parts sitting on a table, but all that might be worth it for the audio quality: The Soundsticks 4 sound fabulous.

I was honestly surprised how good the sound quality was out of what looked to me to be thin, small arrays. Sure, they had four drivers apiece, but being so small, could they really do that much? Well, not only are they doing plenty, they are rich and full sounding in ways that seem to defy their svelte design.

Sagres by The Last Man on Earth comes through full and detailed, with the nuanced lyrics blending beautifully with the bass. The Decemberists’ Once in My Life is my go-to for picking out detailed vocal audio, and while it’s not perfect, the Soundsticks 4 do a very respectable job replicating the lead singer’s high timbres-focused voice. These speakers definitely put more emphasis on the lows and the mids than the highs, but the result is a very warm and rich sound, though slightly less detailed than other speakers and audio equipment. In their price range and especially for computer speakers, I really like what I am hearing out of them.

As mentioned, the bass seems to do a much better job filling out audio when it’s located at the same level as the left and right speakers. Placing the subwoofer on the floor made music sound noticeably less rich.

If you restrict the Soundsticks with lower volume, they aren’t particularly good at presenting balanced EQ.

I also noticed that when the Soundsticks 4 are playing at less than half their max volume, sound quality worsens. If you restrict the Soundsticks with lower volume, they aren’t particularly good at presenting balanced EQ.

Speaking of EQ, the SoundSticks do not offer a way to manage that at all. This is generally OK, because the Soundsticks sound pretty great right out of the box, but I do miss being able to tune it to my preferences. The bass is noticeable, but it’s not going to knock you out of your seat. If you want incredible, teeth-rattling bass our of your computer speakers, you should probably look elsewhere.

Since this is a Bluetooth speaker, if you’re using Spotify on mobile, you can change the EQ in the settings there, but I found boosting the settings there actually seemed to push the Soundsticks 4 too much, and there was a lot of bad audio cracking occurring. What I heard was akin to audio signal peaking, and it was like they were unable to compensate for the digital signal that was pushing them too far. I blame this more on Spotify than I do the Soundsticks, but given that I don’t have any way to adjust sound any other way, the experience was disappointing.

The Harman/Kardon Soundsticks 4 are a fantastic twist on a classic design, with just enough updates to make them fit in 2020 without breaking too far from the classic look. Aside from what amounts to a few small flaws, they sound fantastic and represent great value for the asking price.

Are there other options?

If you’re really craving the classic look the Soundsticks 4 bring to the table, it’s going to be hard to find something comparable. If you don’t mind something more understated, I actually really like my Edifier R1700BT speakers. They aren’t compatible with a dedicated subwoofer, however. Similarly, in our best computer speakers roundup, we also recommend Aperion Allaire or the Audioengine A2+. You’re going to find these all come in a bit less expensive than the Soundsticks, but none of them ship with a subwoofer either.

Even though they’re made of nearly entirely plastic (at least on the outside), they feel robust. Given that they shouldn’t move around much, I would expect these to last for years.

Yes, if this style is your thing. They sound great, and even though you’re going to have to make a lot of room on your desk to support them, they are worth it for the sound and aesthetics.