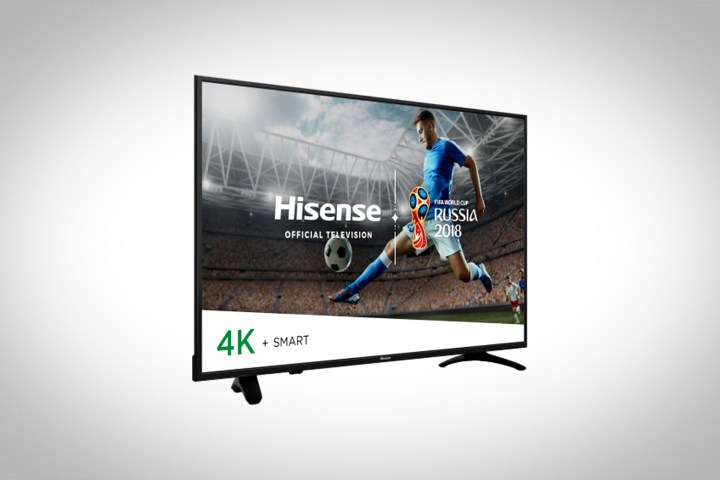 If you’re tired of searching for that lint-covered remote in your couch cushions, affordable TV manufacturer Hisense has the model for you.

After teasing the technology at the CES conference in January, the company has finally announced the Alexa-integrated TV series we were so excited to hear about nearly six months ago. Called the Hisense H8E, the new model features built-in Alexa controls, which can be used via a special microphone-enabled remote (an optional accessory), or via smartphone apps from either Amazon or Hisense — no Echo Dot or other Alexa-powered device required.

In addition to being able to use your voice to control the basic functions of the TV — things like channel, input, and volume — buyers will also be able to use the TV as a visual smart-home hub. Things like weather updates, to-do lists, information queries and other functions on certain Alexa-enabled apps will all be visually integrated into the H8E.

The new H8E model should also look pretty great. The TV features 4K resolution, local dimming for excellent black levels, high-dynamic range (HDR) for bright colors — although we’re not sure whether it will support HDR10, Dolby Vision, or both —  and ambient light sensing for automatic brightness adjustment. The 55-inch model even features special audio tuning from Harmon/Kardon.

In addition to the H8E, Hisense also announced the H6E, which features 4K resolution and HDR — as well as a 120-hertz refresh rate for sports — but lacks the Alexa integration of the higher-tier model.

“At Hisense, we are on a mission to make premium picture quality and cutting-edge voice control available to everyone.” said Hisense USA’s Vice President of Marketing Mark Viken in a press release. “In this age of amazing content, the TV is emerging again as the central hub of family activity, and we are proud to bring premium voice capabilities via Alexa to consumers through our accessible TV prices.”

Given that the new H8E model is so affordable — ranging from $380 for the 43-inch model to $750 for the 65-inch — we expect that most will splurge on the model with Alexa. And at this price point, we can’t blame them. The TV is currently available from the company’s website, in addition to through major TV retailers like Walmart and Best Buy.

Updated on 5-25-18: A previous version of this article said that Uber and ordering meals would be visually integrated into the TV. They will be a voice-only experience.