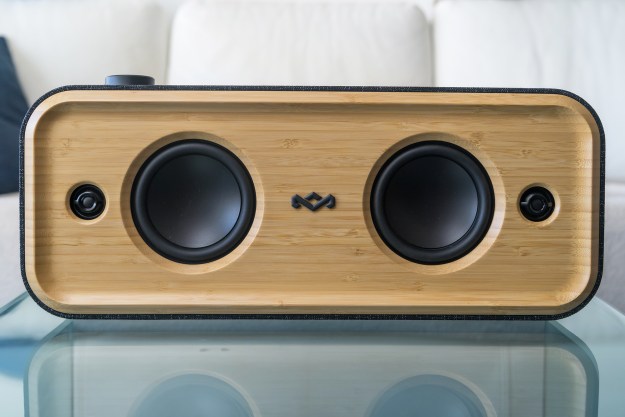 House of Marley Get Together 2 XL review: loud, proud, and made for a crowd
MSRP $400.00
Score Details
DT Recommended Product

When it comes to finding a Bluetooth speaker, it’s less a matter of where to find one, and more what kind of size you’re looking for. Do you need something portable to take with you anywhere or something big that packs a boom you can enjoy at louder volumes? House of Marley (HoM) offers the latter, with a hint of the former in the Get Together 2 XL, a bigger speaker you can use wirelessly, and to some degree, with mobility in mind — despite its 12.6-pound frame.

It’s also the loudest in HoM’s lineup, not to mention among the most expensive at $400. Its mere name implies this big guy can handle serenading a crowd by blasting out up to 60 watts of power. If you have the inclination to play some louder tunes in a variety of spaces, HoM wants you to get together with others to do so.

I’ve long admired the focus HoM applies in using sustainable materials to craft its devices, especially bamboo. It may not be real wood here, but to me, using bamboo as an alternative harkens back to how wood was once a mainstay in building speakers in past eras until plastics left them behind. Seeing it in something modern is aesthetically pleasing to my eyes. The company’s Rewind fabric feels like a nice complement, while the Regrind silicone and recycled aluminum inside show that reusing materials can lead to something both functional and appealing. Even the packaging is entirely recyclable, free of any plastic.

The Get Together 2 XL has two one-inch tweeters, two four-inch woofers, and a large passive radiator situated in the back. The dimensions are modest at 7.52 x 17.72 x 7.09 inches, and while you can reasonably move it around, it is the kind of speaker you might simply end up leaving in one spot most of the time. The sides have slits with integrated rods, ostensibly to attach a shoulder strap. HoM doesn’t actually make one but indicated to me that it may be coming sometime in 2023.

It is clearer why HoM put in multiple plugs, covering North America, Europe, the U.K., Australia, and New Zealand. If you ever wanted to take this speaker with you on a trip, you’re all set with local plugs. Mind you, there’s an added advantage in taking the wall charger and corresponding plug with you to any of those destinations to also charge other devices during a trip — especially when the charger has two ports, one USB-A and one USB-C. Why buy an adapter when this thing will do? With USB-C and USB-A charging ports on the speaker itself, there are even more options for juicing your devices.

HoM doesn’t make things complicated here. You turn the speaker on, it goes into pairing mode, you pair it with your phone or computer, and you’re good to go. As of now, there is no app to use with it, as the existing Marley app isn’t compatible with the Get Together 2 XL. The company told me that will change in 2023 when it will launch an app to work with a variety of its products, but I got no other details.

Once the music plays, it becomes obvious how loud this thing can go.

As I started listening to music on the speaker, I read through the quick start guide to go over some of the features and functions and noticed a couple of things. The main power and volume knob has an LED around it to indicate status. It blinks blue when in pairing mode, solid blue when connected, red when in Aux mode via the Aux-In port in the back, and blinking red when charging via the USB-C port. Press the EQ mode button next to it to cycle through three modes: signature, bass boost, and acoustic.

The corresponding colors didn’t match, though. The guide listed green for bass boost and purple for acoustic. For me, in practice, they were in reverse, and when I brought this to HoM’s attention, they stated it was a mistake affecting the first batch of speakers released but that a firmware update would align the modes with their corresponding colors for all upcoming shipments. It’s not immediately clear whether or not you would see the same issue I did, but in case you do for whatever reason, you know why. With an app, this would be an easy fix HoM could roll out to everyone, but as-is, the company will need to rectify it some other way.

The other buttons are straightforward, with play/pause flanked by track repeat and skip buttons. Since you can use the Get Together 2 XL as a speakerphone, you can take calls and chat hands-free. While the microphones are decent, they aren’t far to the degree of, say, an Amazon Echo Studio or Sonos Move. The speaker’s Bluetooth range is 30 feet, whereas the microphone range — at least for clarity — is considerably less than that. Beyond 10 feet, callers were telling me I sounded a little too distant, so I found the best results were either up close or within a 10-foot radius.

If you want to get even louder, you can stereo-pair two of them together for proper left and right channels.

HoM’s Get Together 2 XL isn’t a smart speaker, but you can sort of make it one by pressing the play/pause button for two seconds to raise your phone’s voice assistant. Its utility is limited by the very same points I made about phone calls, so while you can access your assistant, you can’t talk to it from too far away. Plus, it’s a manual process, in that you have to press the button on the speaker since the mic isn’t always listening for wake words. All of this is fairly similar to the Sony XG300, an excellent speaker for taking audio with you, yet it doesn’t travel quite as far when using the mics for talking.

Once the music plays, it becomes obvious how loud this thing can go. HoM went for a booming soundstage to justify the purpose behind this speaker, which is why I got the impression the signature EQ mode is more bass-friendly. Bass boost takes that up a notch, adding a real rumble to the sound that cuts down the highs a little to add the extra oomph. Acoustic mode is pretty good for orchestral and guitar tracks, though it also became my preference for podcasts, because the tuning clearly emphasizes voices more than the others tended to do.

I was pretty surprised by how much clarity HoM managed to apply throughout. It has a point where distortion starts to set in, yet the crackle and sibilance weren’t as audible as I would’ve expected at such high volumes. Assuming you were to keep volume from the default 50% and stay within range to 80%, you’d be hitting the sweetest spots. Above that, things get really loud, and probably it’s best for either larger indoor spaces or taking it outside. The Get Together 2 XL isn’t all that ruggedized with its IP65 protection, so I wouldn’t necessarily bring it to the beach but would feel perfectly fine with it in the park or backyard, pool or no pool.

As much as I enjoyed listening to House of Marley’s speaker, I also liked how it looked.

If you want to get even louder, you can stereo-pair two of these speakers together for proper left and right channels. Another option is to use Multi Pair Mode to synchronize two or more of them together, especially if you need to cover a wider area and space them out. I didn’t get to test out any of the pairing setups, so can’t tell you exactly how loud or effective they’d be, but it’s great that you have that choice. While not terribly difficult to manage based on the instructions, an app would’ve simplified the process even more.

If you were looking to go really loud for similar costs toward two of HoM’s speakers, the Soundboks Go is made for outdoor party situations more than this speaker is, and you can also pair more than one of those the same way through an app. Not to mention Soundboks makes a shoulder strap for it, though the Go is considerably bigger than the Get Together 2 XL.

As much as I enjoyed listening to HoM’s speaker, I also liked how it looked, feeling it was a natural fit for any room décor. Again, being a fan of bamboo, the wood-like paneling in the front is almost like mashing up retro and modern styling together. That’s something other louder Bluetooth speakers don’t always have.

At first, I considered placement near a wall outlet as necessary but then dithered on that afterward when I started moving it around. It’s not a truly mobile speaker to pick up and set down anywhere. Its footprint just doesn’t make that easy to begin with, but I could work with charging it in one place and then positioning it somewhere else where proximity to an outlet didn’t matter.

HoM rates battery life at up to 20 hours per charge, but for something that gets this loud, that’s never going to happen. It was hard for me to quantify battery life given how often I was adjusting volume, but on a scale of 60-80%, I reckon you can expect about 16 hours on the quieter side and 12 hours on the louder one. It can also change if you’re using the speaker’s USB-A or -C ports to charge a phone or other mobile device. I’m throwing out approximates, so those numbers could vary, but I want to temper expectations since the company talks up battery life a lot for the Get Together 2 XL. The good news is it charges up relatively quickly. I went from empty to full in about two hours, solidifying my choice in leaving the speaker away from an outlet.

At this price range, the Get Together 2 XL earns its keep as both a louder Bluetooth speaker and a pleasing audio device that fits in well wherever you want to put it. You are paying extra because of how loud it can get, and to justify the $400 you’d have to spend on it, you need to be able to pump up the volume with some regularity. If you’re routinely going to listen at lower volumes, there are plenty of alternatives that won’t burn as big a hole in your pocket.

It also depends on whether you want ancillary features. Do you care about talking to your voice assistant hands-free? Would you prefer a speaker with an app available now, rather than waiting for one? Would you have preferred a shoulder strap came included in the box? All valid points, but they don’t ultimately detract from what the Get Together 2 XL can deliver, so if audio muscle in a nice frame is what you have in mind, this one won’t disappoint.

Topics
What is Snapdragon Sound? Qualcomm’s wireless audio brand fully explained
What is Tidal? The hi-fi streaming music service fully explained
What is Spotify? Music, pricing, and features explained
What is aptX? Cutting through the clutter of Qualcomm’s codecs
The best TVs of 2022: our favorites from Samsung, LG, Sony, and more
These are the wireless earbuds I’m taking on a beach vacation
The best TV shows on Amazon Prime right now (December 2022)
Best new movies to stream on Netflix, Hulu, Prime, HBO, and more
The best noise-canceling headphones for 2022
The best new shows to stream on Netflix, Hulu, HBO, and more
The best wireless headphones for 2022: Which should you buy?
The best romantic comedies on Netflix (December 2022)
Best headphones for 2022: Sony, Bowers & Wilkins, and more