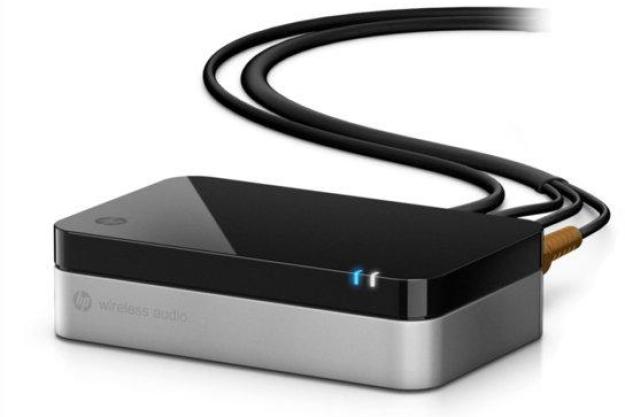 “Its sound quality is mediocre at best, and its expansion capabilities are extremely limited, especially in the face of the strong competition.”

With all of the wireless streaming devices available today, it’s hard to believe there was a time when wires were our only music-delivery option. Nowadays, nearly any audio component can be streamed to or from, and even more mobile devices and wireless transmitters are available from which to pipe tunes. That last option has piqued Hewlett Packard’s interest. HP recently unveiled its $99 Wireless Audio solution (and no, those caps aren’t a typo; that’s its model name) for folks who are interested in delivering music from their computer to their audio system, untethered. We decided to put HP’s gadget to the test to see how its performance stacks up.

We were immediately impressed with the Wireless Audio device’s sturdy box and high-quality packaging. Getting to the goods inside couldn’t have been easier: Simply open one end of the box and pull out the internal tray. Inside the box we found a wireless receiver module, a USB transmitter, a wall wart-style AC adaptor for the receiver unit, a quick setup guide, and a CD-ROM disc containing the setup software and user guide. Note, however, that HP includes no interconnects to connect the receiver unit to your system; so be sure to have the appropriate cables on hand.

Two components make up the HP Wireless Audio system: a USB transmitter for streaming audio from your computer or laptop and a receiver module that hooks up to your home audio system or powered speakers. The receiver unit looks like a high-quality component. We appreciated its sleek, gloss-top design and contoured edges. Its form factor and good looks freed us from worrying about the need to hide it or tuck it into cabinet.

HP’s Wireless Audio device is also compatible with the KleerNet ecosystem. This means the HP can stream music wirelessly to other KleerNet-compatible wireless speakers such as those from Monster, Astro Gaming and Boston Acoustics. The Wireless Audio receiver features four output options: standard left and right RCA audio jacks, an S/PDIF output, and a combined 3.5 millimeter mini-Toslink/headphone jack.

Although setup was simply a matter of running the software CD-ROM and following some basic instructions, it seems like an unnecessary step when similar wireless audio devices require none of this. If you have a newer computer without an optical disc drive, you’ll need to download the package from HP’s website.

After setup, we let the HP system break in for about 20 hours. Then we tried using the receiver/transmitter pair in the same room, just to make sure we had things working correctly. Once we started playing music from our computer’s Spotify service, the HP receiver had no trouble locking onto the signal and streamed music to our A/V system almost instantaneously. We experienced no sound dropouts and were even able to place the receiver module within a few inches of a Wi-Fi router without issue.

Unfortunately, once we tried moving the receiver module, we quickly lost the signal. We attempted to test the HP’s range by moving the receiver two rooms and a couple of walls over, but couldn’t get a lock. Although HP specifies a usable range of up to 30 meters (100 feet), we could only get up to about 9 meters (about 27 feet) through walls before the signal dropped out. HP claims its Wireless Audio system should experience minimal interference – and we had only two wireless devices in our dwelling (a 2.4Ghz cordless phone and Wi-Fi router) – so the claimed range is highly optimistic at best, and misleading at worst.

The HP’s sound was a mixed bag. Compared to AirPlay, the HP Wireless Audio system stripped away less of the music’s harmonic content and transient information. The HP also sounded less artificially bright through the mids and lower treble. However, sounds such as the trailing decays of piano sustain and cymbal strikes seemed too sharp and prematurely clipped off, a common sonic trait of entry-level digital and wireless gear.

Nevertheless, HP’s system portrayed a realistic, warm tonal balance overall, with better bass impact and midrange richness than AirPlay. Depending on your sonic preferences, you may prefer one unit to the other. We ultimately preferred the sound of AirPlay for its slightly more natural musicality, but both the HP and Airplay were comparable in their overall sound quality.

Once we put HP’s Wireless Audio system up against a traditional wired connection, however, there was no comparison. Listening to several tracks from the Beatles’ wonderfully complex and multi-layered Magical Mystery Tour album, we agreed the wired connection sounded distinctly better.

Vocals and other midrange sounds, in particular, were harsher and more distorted through the HP, and the music lost much of its sonic detail. Sounds such as the initial attack of drumsticks hitting skin or fingers plucking guitars sounded indistinct, affecting the music’s overall pace, rhythm and flow. Regardless of the music we played, the wired connection from our lo-fi laptop sounded cleaner and clearer from the lowest notes to the highest.

At first, we thought this difference might simply have been a byproduct of low-cost wireless audio systems in general. But then we remembered that the Nuforce Air DAC system we reviewed earlier, although more expensive, sounded leagues better. It was just as good as a wired connection and could even be preferable to one depending on the quality (or lack thereof) of the DAC in the device from which you’re streaming. We could (and did) listen to the Nuforce system for hours while we found ourselves wanting to turn off the HP system after only a couple of songs.

The question of whether HP’s Wireless Audio system is a good recommendation depends entirely on your priorities and available options. If the HP is the only device of its kind at your local store and you need to buy something pronto, it’s an OK choice. After that initial setup hiccup, the HP worked reliably all of the time, and our computer had no trouble recognizing the USB transmitter whenever we plugged it in. Plus, the KleerNet compatibility may prove to be an asset in the future. Unfortunately, in the here and now, your options for KleerNet devices are severely limited, and we’re hard-pressed to find anything else the HP Wireless Audio system has going for it.

On paper, HP’s Wireless Audio system ticks a lot of the right boxes: zero lag time and interference; minimal setup via CD-ROM disc; and multiple output options, among other things. However, reality paints a different picture: Other competing wireless audio devices offer far better sound, ease of use and flexibility for just a little more money – or for less.

The Audio Engine W3, for example, retails at $149 and requires no software, setup or pairing – nor does the excellent Nuforce Air DAC we reviewed at $179 for a similar USB-only configuration. True, these options are more expensive than the HP system. But both also offer an expansion path for mobile devices.

If your budget is limited, plenty of other options with similar feature sets are available in the same price range as the HP, such as the Creative Labs Sound Blaster system. That device costs noticeably less than the HP, with a street price of around $50.

Much as we’d like to recommend the HP Wireless Audio system, we can’t without serious reservations. Its sound quality is mediocre at best, and its expansion capabilities are extremely limited, especially in the face of the strong competition. Unless the HP really is your only option, we suggest exploring other systems first.