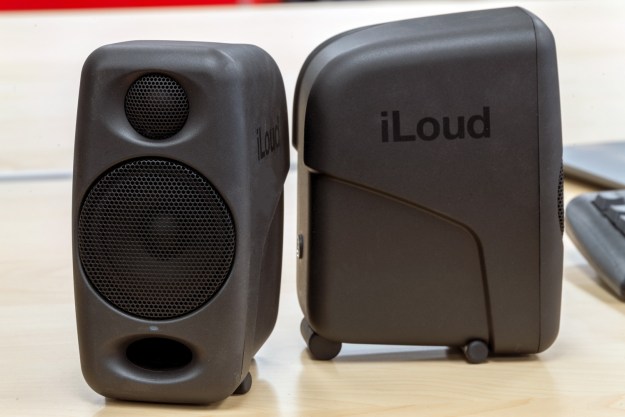 “The iLoud Micro Monitors are some of the best-sounding, most-portable speakers in their class.”

While the quality of sound cards, portable recording interfaces, and digital-to-analog converters has steadily increased over the years, on-the-go musicians and serious listeners have still mostly been confined to headphones to get an accurate representation of their favorite works. That’s something that the folks at IK Multimedia have been working hard to change, introducing a host of portable gear for the traveling music maker.

The backpack-ready iLoud Micro Monitors serve as IK’s bid to corner the market on clear and affordable small-room sound. Light, feature-packed, and capable of delivering extremely detailed sound for their size, the iLoud Micro Monitors are a formidable mobile weapon. And while they may not be a replacement for your 8-inch studio monitors or high-end bookshelf speakers, they are some of the best-sounding portable speakers in their class.

The Micro Monitors come simply and efficiently packaged with everything you need for almost-instant playback. The pint-sized speakers emerge from a red and white box wrapped in foam, along with a power cable, a cable to slave the right speaker to the left, and a 3.5mm-to-RCA audio cable for phone (provided you don’t have the latest iPhone, of course), tablet, or laptop connection.

The iLoud Micro Monitors look simple and understated. The cabinets are rounded, high-cheekbone versions of the typically jagged rectangles shown by most of their studio-monitor brethren, constructed from matte-black plastic. A shiny “iLoud” logo on the side lets you know the brand, and a small LED on the front lets you know the speakers are on. Otherwise, nothing visually leaps out at you.

The Micro Monitors pack the kind of features you’d expect from higher-end studio monitors, with a few extra bells and whistles for ease of use. Along with Bluetooth functionality — a very nice touch for those with a tendency to lose pesky RCA cables — the speakers come with threaded, 3/8-inch jacks on the bottom for easy mounting, along with fold-out kickstands for desktop decoupling.

The iLoud Micro Monitors are some of the best-sounding, most-portable speakers in their class.

Interestingly, the RCA and Bluetooth inputs are simultaneous, meaning that you can play audio from both Bluetooth and the ⅛-inch audio cable without switching inputs. That’s a cool option for those who have the ⅛-inch cable hooked into their computer’s audio jack, but want to hear a reference song on their phone.

The controls rest at the back of the left speaker, including a power switch, and a volume knob which also allows listeners to flip between three position-based EQ options. You can choose whether you are listening on a desktop or with the monitors on mic stands, or whether the tuning of the room you’re in requires a 3db high or low frequency reduction for flatter sound. These are excellent options for a set of speakers designed to be moved between listening environments, with room sound often varying dramatically from place to place.

Each speaker is powered by a 50-watt class-D driver, and IK claims they are tuned for extremely flat frequency response. Sound is delivered via a pair of 3-inch woofers matched by ¾-inch tweeters, with an added set of reflex ports for enhanced bass response.

The flat and dynamic sound we were promised is delivered by the iLoud Micro Monitors with impressive clarity and depth for speakers this size.

Bass response is more than adequate, with the exception of the absolute basement of the spectrum, which even larger and more expensive studio monitors struggle to reach without a subwoofer.

The speakers are also able to achieve impressive mid and high-range clarity on bass-packed songs like Kaytranada’s excellent Anderson .Paak feature Glowed Up. Even when pushing the Micro Monitors to high volumes, instruments sound natural and well-placed, as the speakers provide a flat and detailed blanket of sound in even the most adverse of sonic circumstances.

When tasked with playing more traditional high-fidelity music, the Micro Monitors shine even brighter. When playing tracks like The Dirty Projectors’ Gun Has No Trigger, the speakers show off a soundstage that feels close, personal, and impeccably live — as though a living, breathing version of the Brooklyn band is performing on a tiny stage right in front of you. Jazz favorites like Julian Lage’s I’ll Be Seeing You also sound intimate and personal, feeling like a transparent window into the Los Angeles studio in which the track was recorded.

Any gripes against the iLoud really come down to the size and style of the speakers themselves. They put out a tiny amount of amp noise (something that can be found in most powered speakers if you listen for it), and overall, they don’t perform as well in the low end as a larger studio monitor. But let’s face it, no real studio engineer is going to consider a pair of these instead of studio stalwarts like the Yamaha HS8.

The iLoud Micro Monitors are an excellent option for those looking for small, high-fidelity computer speakers, or wish to do some audio work on the go.

The biggest competitors to the iLoud Micro Monitors are mid-level bookshelf and computer speakers. Options like the Edifier e25 Luna Eclipse, and the Polk Hampden speakers offer flashier looks and similar sound quality at a slightly lower price, while the Audioengine A2+ serve as perhaps the most similar speaker with a dressed-down design.

With replaceable power and RCA cables, we expect the solidly-built iLoud Micro Monitors to last for years of continued use, as long as you treat them right.

Yes. The iLoud Micro Monitors are a great option for those seeking near studio-quality sound on the go, as well as those on the hunt for high-end computer speakers with a clear and balanced sound signature.

The best Roku TVs of 2022: which should you buy?
The best wireless earbuds for 2022
PSB Alpha iQ Streaming Powered Speakers connect to pretty much anything
Sony’s SRS-XV900 pumps its party speaker lineup to the next level
B&W’s flagship Px8 headphones cost way more than they were supposed to
Amazon adds spatial audio to the Echo Studio smart speaker
Amazon’s third-gen Fire TV Cube has great features the Apple TV is missing
Apple AirPods Pro 2 vs. AirPods Pro: What’s new?
How to reset Apple AirPods and AirPods Pro
New Amazon Fire TV Omni QLED displays art, senses your presence
How to get Dolby Atmos on Netflix
How to add an app to a Vizio smart TV
How to watch The Weather Channel without cable