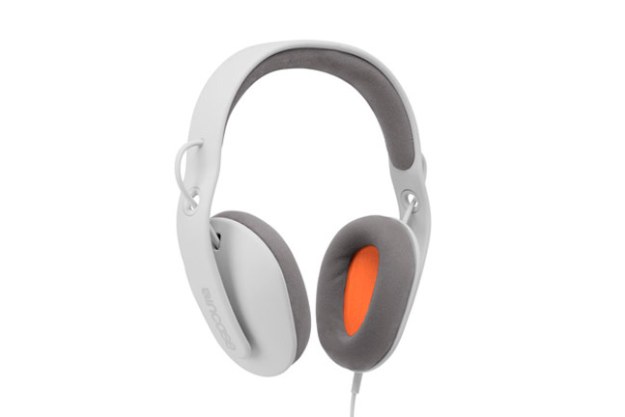 “The full-size Incase Sonic headphones are so well designed, they make you want to love them; but some occasionally shrill treble could be a deal breaker for some picky listeners.”

To be perfectly frank, we rolled our eyes a little when we first learned that Incase, perhaps best known for its iPhone and iPad accessories, would be dipping its toe in the headphone marketplace. We get that designer headphones are a hot ticket right now, but too often we’ve found that headphones designed for fashion often come up short when it comes to doing what headphones are intended for: producing good sound.

So here we have Incase, a company noted for its well-designed accessories, jumping into the audio space with, ostensibly, no expertise whatsoever in audio engineering. What could possibly go wrong with that scenario?

What we expected from Incase was a set of cans that looked and felt like a 2011 Audi but sounded like the stock speakers in a ’75 VW Rabbit. As it turns out though, Incase did pretty well with its first headphone offering. The Sonic headphones, sitting at the top of Incase’s audio lineup, sound far better than we expected. In our Incase Sonic review, we go through both the finer and not-so-fine points of these headphones and rank them against the toughening competition.

Incase’s marketing tagline is: A better experience through design. Given the company’s reputation is staked on design, we expected a pretty outstanding out-of-box experience. Incase delivered big time.

Around the same time we received our Sonic headphone review sample, we noticed Incase’s new headphone line taking up residency (in a big way) at our nearby Apple store, so we expected something distinctly “Apple-esque” from the de-boxing experience too, and that’s exactly what we got.

It starts when you touch the box. No kidding. The exterior box has a soft, almost rubbery feel to it that we would later learn mimics the finish of the headphones themselves. A grey ribbon fixed to the side of the interior box makes extracting it that much easier. Atop the interior box is a semi-circle tab (very Apple) which, when pulled, lifts the lid and reveals…another lid. From here on out, the box material matches the accent color of the headphones. In our case, that color was bright orange.

After peeling back the fourth layer of packaging, we finally got to the Sonic headphones and the included accessories. As soon as we touched the headphones, we liked them. Everything about them feels great. The exterior is a soft, rubbery, anti-scratch material that is extended to the headphone cord and the supple memory foam in the earpads and headband is covered with a luxuriously-soft suede material.

The Sonic come with two 3.5-foot cables separated only by color. One matches the headphones’ exterior color; the other matches the accent color. Both offer an in-line mic with three-button control and a right-angled mini-plug which can be stepped up with the included ¼-inch adapter.

Not surprisingly, the Incase headphones come with a case. What was a surprise was the type of material Incase chose for the outer portion of the circular pouch which stores the headphones. It’s a thin, metallic looking material akin to Mylar that looks a lot like an old astronaut space-suit. Weird.

Incase makes up for the case’s exterior weirdness with an exceptionally soft micro-fleece interior that is so tactilely pleasing that we kept reaching into it just for fun. Someone needs to make a blanket out of this stuff, people.

We’ve made it pretty clear that the Incase Sonic felt great in our hands. It turned out they felt great on our head, too. The Sonic are absent any unneeded pressure on the ears, yet they stay put effortlessly. The cushioning at the headband is extremely effective and the ultra-soft suede-covered earpads made wearing the Sonic so pleasant, we didn’t want to take them off. The oblong oval shape of the earpads added to the comfort quotient as it fit right around our ears without making them feel boxed in.

Don’t let all of our talk about luxuriously soft this and that mislead you, though. The Sonic are a rugged and resilient pair of cans. The rubbery exterior we mentioned also resists scratches and fingerprints extremely well and the amply-padded headband is extremely pliable. The headphones’ only likely weak point, the pivoting mount where earcup meets headband, seems plenty strong as well. In short, it is not likely that these headphones will break if inadvertently sat upon or otherwise crushed.

Checking out the technical specifications we noted that Incase claims the Sonic’s 40mm diaphragm driver is capable of a 20hz-20kHz frequency response with a rated SPL of 103 db (+/- 3db) @ 1kHz and an impedance around 32 ohms, give or take 15%. The total harmonic distortion rating is 3% which, honestly, is a big red flag that had us concerned about audio quality. To put things in perspective, the Sennheiser HD598 come in with a 0.1% THD rating, which is more in line with what we’re used to seeing and hearing from $200 headphones.

We gave the Incase Sonic a good 40 hours of break-in time before we put them on to do any serious listening. Once we were ready to listen, we plugged the Sonic straight into our iPhone, pulled up a playlist and hit the random button.

The first notes reproduced by the Sonic came by way of “Fire Woman” from The Cult’s Sonic Temple record. The opening layers of guitar licks are kissed with the effects of a chorus pedal, a little distortion and some sort of phaser. The Sonic headphones did a good job of keeping the guitar layers separate while enunciating each pick of a string. Later in the track, the drummer and bass player build the intro with a static eighth-note pattern that starts quiet and grows ever louder. Here, the kick drum has a good amount of snap and just a touch of low end while the bass’s tone is clean and round. The Sonic did an admirable job of faithfully reproducing the recording by not adding in sub-bass that isn’t actually there. We did, however, hear a little more high-end snap on the kick drum than we’re used to.

Moving forward, we had a listen to a live performance of Fleetwood Mac’s “Go Your Own Way” from the group’s The Dance album. On this cut, the kick drum has much more body, providing a realistic boom with a controlled decay that, if pulled off right, sounds very live. The Incase Sonic kept nimble, bringing in the extra low end without sacrificing tone. We even heard some of the audience cheers deep in the background as captured by the on-stage microphones. Later in the same song, as the band hits the chorus, the background vocals bring the song to life. The Sonic treated us to realistic vocal tones that were uncongested and uncolored with layered vocal parts that were easily distinguishable. Again, though, some of the guitar strumming and hits from the snare drum seemed a little harsh.

Next on our musical travels back in time: Tom Petty with “You Don’t Know How it Feels” from his 1994 release Wildflowers. On this track, a few seconds of organ crescendo is followed by the band’s entrance. The moment we heard the drummer’s hi-hat and the shrill sound of Petty’s harmonica, we understood what was bothering us on the previous tracks. The high frequencies were simply blown out of proportion relative to the rest of the frequency response. Not only did the treble seem unnaturally hot in the mix, but it bordered on screeching at times.

Recognizing that the iPhone’s headphone output often exacerbates poor quality audio issues, we switched to our laptop, which was running through our HeadRoom Micro DAC and Amp, both of which do wonders to take the digital edge of particularly hot tracks. Playing the same track, we noticed improvement but the hi-hat continued to grate on our ears. Time to turn to a track we know really well.

We went back to Russell Gunn’s “Blue in Green” for something fresh and familiar. The opening piano sequence sounded lush and spacious, just as we’d hoped. But as soon as the percussion came in, we began to wince. The high frequencies were just too much, especially as the percussionist strummed across a set of chimes. Each high frequency ring reinforced the next, creating a cascade of unwanted ring in our ears.

We spent plenty more time listening, hoping with each track that the high frequency goblin wouldn’t show up and sometimes he didn’t. It really depends on the music and the mix. Eventually, though, we were reminded not too get too comfortable because, at some point, that little bugger was sure to show its ugly head.

At the end of the day, we wound up frustrated by the Incase Sonic. Acoustically speaking, we’d say they get it right 97% of the time but the 3% of the time they get it wrong can be excruciating, especially when running directly off of an iPhone.

Incase’s first go at the headphone business is a pretty strong one. The full-size Sonic headphones are so well designed, they make you want to love them; but some occasionally shrill treble could be a deal breaker for some picky listeners. On the whole, we think Incase did a great job. The company has shown that it is every bit as capable of superior headphone design as the folks behind those celebrity endorsed models. If Incase can tame its trouble with treble, it will become a major contender in the exploding headphone marketplace.