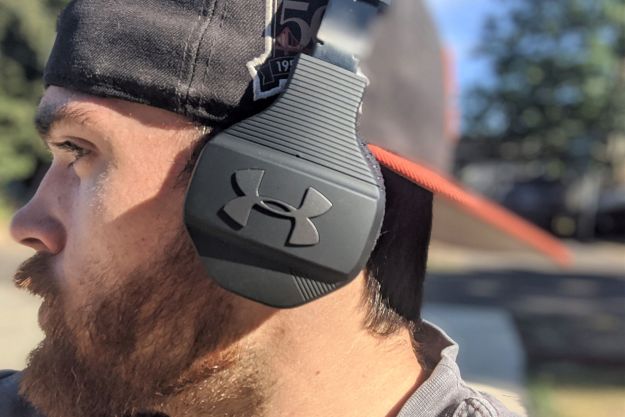 Tech versus time is a war that is waged endlessly, even though one almost inevitably comes out unscathed on the other side. It takes a special product to keep the clock from running out, and in the fast-moving world of wearable audio, those products have become harder and harder to come by.

Take the JBL/Under Armour Wireless Sport Train headphones, which retailed for $200 when they were released in 2018 but have since dropped down to $130. Sure, they seemed solid at the time, but how do they hold up against the unforgiving might of the year 2020? Let’s find out.

The packaging of the Wireless Train is a dark shade of black, matching the headphones themselves. After sliding off the initial cover, you’re met with a rectangular carrying case sporting the familiar Under Armour logo across the front. The headphones, as well as a charging cable, auxiliary audio cable, and a quick start guide are waiting inside.

The first start-up the Wireless Train is slightly quirky, at least if you’re like me and stubbornly refuse to read the fine print before trying out your new pair of headphones. The power button is a toggle switch that needs to be held in place for two seconds before powering up. From there, though, the headphones automatically enter pairing mode, allowing you to follow the standard procedure of pairing your mobile device through its Bluetooth settings.

I’m not thrilled about the Wireless Train supporting just Bluetooth 4.1 technology, since it means connectivity and range aren’t up to par with devices that support the newer, better Bluetooth 5 standard. This brings up an important caveat about the Wireless Train: At the time of this review, they’re already two years old. In tech time, that’s about a century. After reviewing the Adidas RPT-01, I went looking for the closest comparison I could find. The Wireless Train were the clear answer because of their price and design, and unfortunately for these headphones, they’re going to be rated by modern-day standards instead of their heyday in 2018.

That’s not to say the Wireless Train can’t still be capable headphones — they can. But up against a comparatively brand-new product, it’s going to be an uphill battle for these JBL cans.

For a slightly older product, the Wireless Train does sport a rather modern design for on-ear, sport-focused headphones. In fact, there really aren’t a ton of differences between these headphones and the newer Adidas, except for aesthetic choices like the shape of the earcups and the logos displayed on each pair of headphones.

One key difference here is weight. The Adidas came in at 209 grams, with the Wireless Train tipping the scales at 240 grams. It’s not overtly noticeable, as each pair of headphones distributes the weight well. But if you’re trying to keep your headphones as light as possible, this is surely something to make note of.

One unfortunate similarity between these headphones: The inescapable tightness that comes with on-ear headphones that are meant to stay in place during intense workouts. If I were wearing them for a quick trip to the gym, I could likely manage the pressure on my skull without issue. But when wearing them for longer periods of time, as I did for the purposes of testing them, the Wireless Train become nearly headache-inducing with how much they clamp down on your head. I experienced the same kind of feeling with the Adidas — it’s a universally uncomfortable feeling.

The ear cushions on the Wireless Train are made of “UA breathe material” as JBL calls it, and they are washable, which is key for headphones that you’ll inevitably sweat all over. The button controls on the earcups next to those cushions are simple to use, giving you control over volume and switching music tracks between reps. I’m working out at home these days for obvious reasons, but I had no problems using these buttons to execute commands while on the go.

The button controls on the earcups next to those cushions are simple to use, giving you control over volume and switching music tracks between reps.

The Wireless Train really start to show their age in this category. They’ve got the same IPX4 weather-resistance rating that the Adidas do, which frankly is the minimum protection these headphones should be equipped with. Nevertheless, it’s an adequate rating for the gym rats of the world, since it protects against sweat and splashes.

The Wireless Train, however, have 16 hours of playback per charge at most. The Adidas, meanwhile, will net you up to 40 hours of battery life before they must be charged again. Maybe 16 hours of battery for headphones was solid two years ago. But through the lens of 2020, it’s a far cry from acceptable when comparable models offer more than double the battery life.

Despite its battery-related shortcomings, I did appreciate the Multifunction TalkThru button built into the Wireless Train. Essentially, pressing the Under Armour logo on the right earcup will drop down your music volume and pipe in surrounding sounds, allowing you to have quick conversations without removing the headphones when you need to.

To be clear, these aren’t active noise-canceling headphones, and they have decent passive noise isolation at best. Even then, it has proven to be a valuable feature for me. Unless you’ve been in this situation before, you can’t understand how nice it is to not have to remove, then re-position a pair of headphones on your head after a several-second conversation with a passerby on a walk. It’s a darn-near impossible maneuver to pull off when holding the reins of a small pack of dogs, and it’s one I thankfully did not have to struggle through with the Wireless Train.

Pressing the Under Armour logo on the right earcup will drop down your music volume and pipe in surrounding sounds.

Let’s throw away the mostly-outdated features of the Wireless Train for a second, and consider what is still one of the more important aspects of headphones, or at least what should be — how do they actually sound?

Based on my extensive listening of both pairs of headphones, I feel the Wireless Train has a clear edge over the Adidas in terms of sound. The RPT-01 excelled with bass-heavy tracks, but otherwise sounded average when trying more balanced genres. The included app and equalizer helped mitigate the issue to an extent, but it was hard to work around regardless.

The Wireless Train may not have gotten as deep into the low end as the Adidas were capable of, but they still had solid, refined bass. More importantly, they simply filled out the rest of the frequency spectrum better. The Wireless Train have 40mm drivers with a frequency response range of 16-20,000Hz, and they prove to be exactly as capable as those specifications might suggest.

Songs like Dierks Bentley’s Burning Man or the Red Hot Chili Peppers’ By The Way suggested the Wireless Train were able to avoid getting muddy or cramped. There are better sounding headphones –lots of them in fact — but for workout cans, these were more than sufficient.

I did catch my breath long enough between a couple of workouts to make a few calls with the Wireless Train. Though they weren’t necessarily meant to knock this part of the experience out of the park, they did just fine in terms of maintaining an acceptable amount of clarity on both ends of the calls. It could have been better, but as I’ve found in recent tests of other cans, it could also have been far worse.

The UA Sport Wireless Train are well past their prime in terms of features. That being said, the audio quality of these cans has withstood the test of time, and that just might earn them the occasional spot in the lineup as a battle-tested veteran.

I preferred the sound of the Wireless Train, but there’s no question that the Adidas RPT-01 possessed a superior feature set, with battery life being a highlight. For quality headphones outside the sport category, the $200 Razer Opus are a personal favorite for their blend of price, features, and sound quality.

With a one-year warranty and a seemingly protective carrying case, I don’t think you need to worry about these headphones tapping out after just a few workouts. Keep them charged, and they should be everyday gym fixtures.

Not at their retail price of $200. The Adidas RPT-01 cost $30 less than that and qualify as a more valuable buy for the money. But at its current price slash of $130, I’d consider the UA Sport Wireless Train for their exceptional sound quality — if you can live with features that are decidedly out of date.