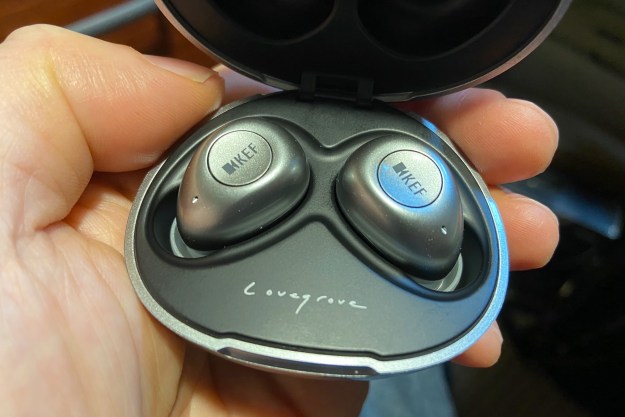 “Despite so-so ANC, their sleek design and great sound make for an appealing package.”

KEF is one of the most renowned names in hi-fi, thanks to speakers that have impressed reviewers and enthusiasts for years. The company’s wireless LS50 bookshelf speakers are a great example of what happens when you merge classic acoustic know-how with leading-edge technology. So it was with great anticipation that I took delivery of the company’s very first true wireless earbuds, the $230 KEF Mu3. With heavy competition from Sony, Bose, Jabra, Sennheiser, and Grado, did KEF bring enough of its top-flight audio engineering to the Mu3? Let’s take a look …

Inside KEF’s all-cardboard and easily recyclable box, you’ll find the Mu3 inside their charging case, a USB-C charging cable, three extra sizes of silicone eartips (plus the default mediums installed on the earbuds), and quick-start documentation.

Let’s get one thing clear right away: The KEF Mu3 are drop-dead gorgeous. Both the earbuds and their charging case look like sculptures cast from highly polished aluminum. They’re smooth and shiny, and if you leave the charging case in a highly visible place like a coffee table, desk, or kitchen counter, I guarantee people won’t be able to resist picking it up just to feel it.

For those who like getting lost in the details of their favorite tracks, the Mu3 are more than happy to oblige.

The attention to detail continues right down to the hinge mechanism. Most charging cases have flimsy lids that feel like they might break if you’re not careful. When their magnets aren’t keeping them in the closed position, they flop around worryingly. The Mu3’s lid feels luxurious by comparison, with a hinge that reminds me of a laptop screen — it stays put in any position from all the way open to fully closed.  With its aluminum-looking finish, it’s basically the MacBook Air of charging cases.

Don’t like the high-gloss finish? KEF added a second color option in August 2021: Charcoal gray, which uses a matte finish and a darker color for both the earbuds and charging case.

Unfortunately, the case is also kind of bulky, so despite its sensuous curves, it’s not very pocketable. But that’s OK — KEF appears to have used a tough transparent outer layer on the plastic, and I think it will resist scratches caused by other objects.

These earbuds also have a very acceptable IPX5 water-resistance rating, which should protect them from anything but actual immersion in water.

The KEF Mu3 come with four sizes of soft silicone eartips, which should mean that most folks will be able to get a good seal. And here’s some valuable advice on that front: If you feel the need to cram the earbud deep into your ears (which is possible given their small size), you’re probably using the wrong size of eartip.

They didn’t budge at all and were very comfortable even after several hours of continuous use.

Pushing them in too deep will not only cause discomfort, but it also reduces both sound quality and noise-canceling effectiveness. I discovered that the hard way. I also found that with the largest eartip, I was able to gently insert the Mu3, and they didn’t budge at all and were very comfortable even after several hours of continuous use.

KEF has employed physical buttons on the Mu3, and that’s definitely a good thing. Touch controls can be finicky at the best of times, and I much prefer real buttons when they’re available.

These buttons are easy to press, but strangely, the right button had a more pronounced click response to it than the left.

With a combination of single-, double-, and long-presses, you can control everything except for skipping back a track. But there’s no way to customize these gestures via a smartphone app because KEF hasn’t created one for the Mu3.

There aren’t any wear sensors either, so pulling out an earbud won’t automatically pause your tunes.

The KEF Mu3 are delightful to listen to. Their bright and clean highs, precise midtones, and expertly executed bass lead to surprises with every new track you fire up. There isn’t a trace of the muddiness that often hampers lesser earbuds. Throwing on instrumental jazz standards like Dave Brubeck’s Summertime or Duke Ellington’s St. Louis Blues helps you appreciate the sheer musicality of KEF’s tuning, not to mention the soundstage, which is so tightly controlled that you feel like you can measure the distance between instruments down to the inch.

For those who like getting lost in the details of their favorite tracks, the Mu3 are more than happy to oblige.

When I first popped them in, I was disappointed with the bass, worried that in an effort to achieve that so-called “neutral” or balanced EQ, KEF had gone too conservative with the low end. Turns out I had simply wedged the earbuds too far into my ears.

Once I figured out my mistake, I discovered that not only is there plenty of bass on tap but that the Mu3 are able to deploy that bass selectively, hitting you with a deep resonance only when it’s called for.

The transparency (ambient sound) mode doesn’t let in as much sound as I’d like.

I think the Mu3 are just about perfect when it comes to EQ, but listening experiences being the subjective things that they are, you should know that the lack of an app means there’s no way to rebalance the sound signature if it’s not to your liking.

Active noise cancellation (ANC) has become a standard feature of high-end true wireless earbuds, but there’s still quite a big difference in terms of how each model performs. The Mu3 deliver a noticeable reduction of low-frequency noises when ANC is engaged, but it’s a far cry from the cone-of-silence offered by the Apple AirPods Pro, Bose QuietComfort Ear Buds, and the Nuheara IQbuds2 Max.

Similarly, the transparency (ambient sound) mode doesn’t let in as much sound as I’d like. Conversations are certainly easier with it on, and you do get better situational awareness, but it’s not that magical “hey, it’s like I’m not wearing earbuds” sensation that those other models deliver.

Without an app, there’s no way to dial in either function, and no way to change the ANC trigger action. A single press on the left earbud controls noise cancellation, but it forces you to toggle between three modes (ANC, off, and transparency) instead of letting you swap between ANC and transparency which are really the two most used modes.

KEF really surprised me here. Most true wireless earbuds — even really expensive ones — usually clock in between five and seven hours of battery life per charge. But the Mu3 deliver nine hours — and that’s with ANC turned on. That’s not the longest time by any means, but it doesn’t have to be. With another 15 hours in the charging case, you get a full day of use before needing to plug in with the USB-C charging cord.

Better yet, they also have a five-minute fast-charge system that gives you an extra hour of playtime. My only real disappointment is the lack of a wireless charging option. When KEF initially announced the Mu3, wireless charging was among the listed features, so this may come back in a future version.

I’ve noticed a strong correlation between a pair of earbuds’ ANC/transparency performance and their call quality, and the Mu3 are no exception. They struggle a bit to keep your voice from getting lost amid competing background noises, and there’s a raspy, thin quality to the sound that does get picked up.

They likely do much better when indoors, but outside, where a lot of calls seem to happen on earbuds, the Mu3 should only be used sparingly.

Though they lack some of the features we’ve come to expect on true wireless earbuds at this price, the KEF Mu3 are beautifully crafted, sound amazing, and have a generous battery life.

As good as the Mu3 are, you’ll find more features with comparable sound quality and prices from these competitors:

The $230 Jabra Elite 85t have app-supported EQ, wireless charging, tunable ANC and transparency, customizable controls, a find-my-earbuds feature, and better call quality, but they don’t sound quite as crystal clear as the Mu3.

The $230 Grado GT220 sound very similar to the Mu3 and they charge wirelessly, but they don’t have ANC or transparency mode and they’re considerably bulkier.

The KEF Mu3 appear to be built very well with quality materials. KEF backs them with a two-year warranty, which is better than many competitors. When you add in their IPX5 rating, I think they’ll last for many years if properly cared for.

Yes. The Mu3 ignore a lot of bells and whistles, focusing instead on beautiful design, a comfortable fit, superb sound, and great battery life. But as long as you’re OK with this trade-off, they provide a great listening experience.

Topics
NAD’s CS1 adds wireless streaming music to any audio system
Bowers & Wilkins’ wireless earbuds get better battery life and longer range
The best headphones for running in 2023
The best wireless headphones for 2023: which should you buy?
Netflix expands its spatial audio, number of devices that can download content
Sony’s 2023 AV receivers are Sonos-ready and work with wireless speakers
Rode’s NTH-100M headphones are built for gamers
The best movies on Disney+ right now (February 2023)
Perfect for the Super Bowl, Samsung’s Frame TV is $1000 off
Save 40% on Peacock Premium when you subscribe today
How to watch Super Bowl 2023
The best movies on Hulu right now (February 2023)
The Super Bowl is finally in Dolby Vision – if you have Comcast