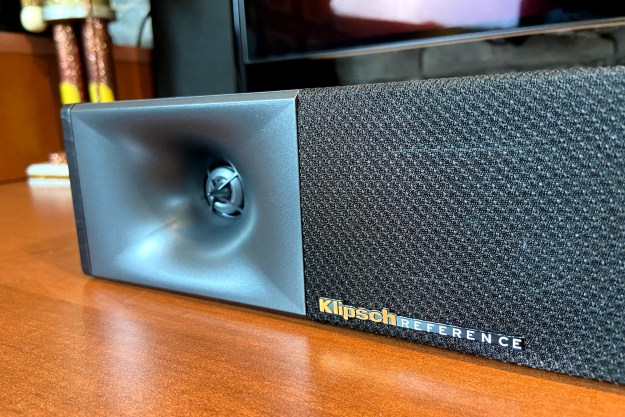 “Powerful and precise, the Cinema 600 is a soundbar for those who like it loud.”

The soundbar market is huge, with models that run the gamut from small TV speakers to monstrous multidevice home theater replacements and range in price from $100 to over $1,000. Somewhere in the middle, you should be able to find a system that delivers powerful, room-filling sound, simplicity of setup and use, and a price that doesn’t make you rethink your life choices. Into that gap falls the $500 Klipsch Cinema 600, a 3.1 soundbar system with one of the biggest subwoofers we’ve ever seen.

Does the Cinema 600 satisfy? Let’s check it out.

The Cinema 600’s L-shaped box is an unwieldy beast you may want to recruit a friend to move — the courier who delivered our review model nearly hurt himself while negotiating our front steps, even with a dolly. Inside, you’ll find the soundbar, the subwoofer, two power cables, an HDMI cable, wall-mount brackets with a template, a remote control with batteries, and the user’s manual. There’s a lot of styrofoam used to protect the components, but the rest can likely be curbside recycled should you choose not to keep it.

The company has designed its soundbars to attract your eyes as much as your ears.

Klipsch is obsessed with putting its speaker technology on display for all to see. Its signature copper drivers are so distinct that a lot of folks never bother installing the included black fabric grilles that come with Klipsch products. So it’s no surprise that the company has designed its soundbars to attract your eyes as much as your ears.

Black-stained wood endcaps, brushed metal accents, and a black fabric grille all exude a restrained, high-end vibe. But the exposed tweeters at the ends, framed by Klipsch’s signature Tractrix horns, may be more polarizing. Personally, I don’t want visual distractions drawing my eye from the screen when watching TV, so I prefer subtle soundbars. These silver plastic horns are hard to ignore when they catch even the faintest traces of room light. It makes the design of the Cinema 600 a harder sell for me, but I’m guessing Klipsch fans won’t mind it at all.

At 45 inches wide, the soundbar is on the long side for the category, but it’s the height that might pose a problem. At nearly three inches tall, there’s a chance it will obscure a portion of the screen on TVs that have very short stands or feet. Measure your setup carefully unless you plan on wall-mounting the bar (which is easy to do thanks to the included hardware).

Control buttons for power, source, and volume sit on the top right of the bar, below a small display that shows the status of each feature. It’s handy to have them, but play/pause and mute buttons feel like obvious omissions.

The down-firing wireless subwoofer is, well, I’m just going to say it: Freaking enormous. It stands over 18 inches tall and is over one foot wide on each side. You probably shouldn’t place objects on top of it or use it as a stool, but it’s nice knowing that you could — it’s ultra-solid, with the same furniture-grade black wood as the soundbar providing an uninterrupted frame on five sides.

Klipsch recommends placing it near the front of the viewing area — against a wall or in a corner — for a more pronounced bass effect. But given its size, this might not be possible in every situation.

Setting up the Cinema 600 is a snap. Plug the soundbar into your TV with the included HDMI cable or your own optical or analog cable, and then plug the soundbar and subwoofer into their respective power outlets. That’s it, you’re done. But pay attention when the manual says to plug in the soundbar first, then the subwoofer — it makes the pairing sequence between the two components much smoother.

The included remote is well-designed and, impressively, backlit for easy viewing in darkened rooms.

Using the bar’s HDMI ARC connection will allow your TV to control its volume and mute functions, but like many soundbars, it doesn’t support some audio formats that require HDMI ARC (like Dolby Digital Plus and Dolby Atmos). It also lacks an HDMI input to use it as a passthrough, so if your TV has limited HDMI ports, you may want to use an optical cable instead. You’ll lose volume and mute control, but don’t worry, there’s a workaround — the soundbar can be set to respond to your TV or cable box’s remote.

In addition to the optical and HDMI ports, you get an analog jack and Bluetooth for wireless streaming from a smartphone. Each input can be selected using the top-mounted buttons or the remote control, which means you can have up to four sources of sound within easy access.

The connection ports sit inside a very small cavity, so if you’re going to run cables to each one, you may have to play around with the order to keep them from bumping into each other.

The Cinema 600 also has a USB port hidden behind the right-side endcap that is primarily used for firmware updates but can also be used for playback of audio files from a USB stick or hard drive. I did not test this feature.

The included remote is well-designed and, impressively, backlit for easy viewing in darkened rooms. A motion sensor lights it up as soon as you pick it up. Deeper functions like bass level, surround mode, dialogue enhancement, and nighttime mode are all easily accessed from dedicated buttons.

Whether it’s Hollywood blockbusters or the latest original TV series from HBO or Netflix, the sound is punchy, precise, and high-energy.

It’s perfectly intuitive, but I’m not crazy about the bar of LED dots on the front face of the soundbar as an indicator for what’s going on. As a volume display, it works perfectly, but the moment you get into surround or dialogue modes, you need the manual to interpret dot sequences. It’s like Morse code. Klipsch should consider shipping the Cinema 600 with a display-equipped remote as Vizio does with its midtier and flagship soundbars. The last thing you want to do when watching a movie is dig out a manual.

The Cinema 600 is a 3.1 channel system, which means you get the equivalent of three speakers (left and right front channels, plus a center channel) and the subwoofer. That’s a near-perfect setup for folks who simply want much better sound than their TVs can produce. It gives you excellent stereo separation while maintaining crystal-clear dialogue via the center channel.

Whether it’s Hollywood blockbusters or the latest original TV series from HBO or Netflix, the sound is punchy, precise, and high-energy. And wow does this system get loud when you want it to — with nary a hint of distortion. After all, 600 watts is a lot of power.

The four dialogue modes successfully increase speech intelligibility, something I’ve come to rely on for dialogue-heavy shows like The Crown.

Overall, it’s a hugely enjoyable TV sound system. But there are two areas that I found less than stellar.

First, you would think that with such a huge subwoofer, low-end bass rumble would be off the charts. But even with the bass level maxed out, low-frequency effects are seriously subdued. Part of this may be attributed to where I placed the subwoofer — in the middle of my viewing wall, not in a corner. But I don’t think that ought to make a huge difference. Don’t get me wrong, there’s still plenty of bass, but it feels like it’s being produced by a sub half the size of the unit that ships with the Cinema 600.

Second, you can engage a virtual surround mode that, in theory, widens the beams of sound coming from the bar to create the equivalent of having a full 5.1 surround system. Using this mode definitely increases the width of the soundstage, but at the same time, it punctuates the high frequencies and pulls back on the midrange. The effect actually flattens the sound instead of making it more immersive.

On the bright side, if a true 5.1 system is what you want, you don’t need to choose between great 3.1 and mediocre virtualized surround sound. The Cinema 600 can be expanded with Klipsch’s wireless Surround 3 ($250 per pair) speakers, or you can buy them together as a bundle early in 2021.

Music on the Cinema 600 is also very dynamic (though once again, that surround mode should be avoided). Modern, studio-produced tracks like The Weeknd’s Blinding Lights or Beck’s Uneventful Days sound especially good, while older material is not quite as vibrant but still enjoyable.

Klipsch delivers a lively and loud 3.1 home theater soundbar in the Cinema 600, which boasts a good set of connections and a well-designed remote.

There’s no shortage of excellent soundbar options at the same $500 price as the Cinema 600. The LG SN7Y is a 3.1.2 system that does a decent job of delivering Dolby Atmos from a single bar, and Sony’s HT-G700 might just best both the Klipsch and LG in terms of virtualized surround sound. Either of these soundbars will likely prove more satisfying than the Cinema 600 from a multichannel point of view, but if you’re after a clean, powerful sound, it’s hard to beat Klipsch.

Yes. Though not as immersive as some soundbars, the Cinema 600 deserves a spot on your short list for its power and precision.