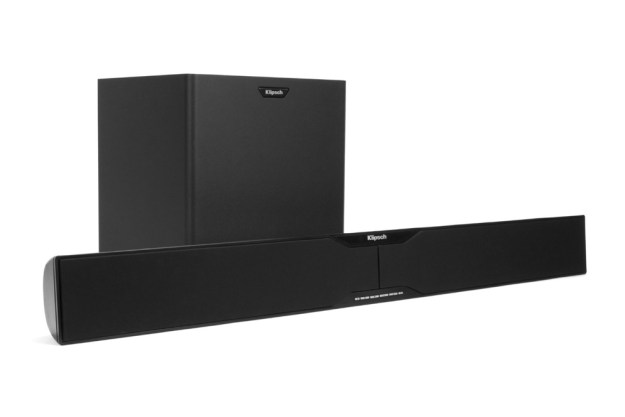 “The Klipsch SB3 sounded more like a good pair of stereo speakers than almost every other sound bar we’ve yet heard.”

Take a quick look at the sound bars currently available, and one thing becomes immediately clear: They seem to be getting smaller and smaller, year after year. Luckily, they seem to be getting better, too. Take, for example, the Toshiba Mini 3D sound bar we raved about recently, which packs quite a bit of performance into a neat ‘n tidy little package.

Trouble is, most other aesthetically-compact sound bars can look a little too small in certain situations. For example, if you’ve got a 50-inch or larger TV hanging from your wall, chances are good that a mini sound bar setup could look disproportionately sized sitting directly underneath your ginormous TV.

Luckily, a few manufacturers are hip to the fact that some consumers just might want a sound bar that looks as huge as it sounds. You can count Klipsch among those companies that think bigger is better. At just over 44-inches wide, Klipsch’s SB-3 sound bar is definitely not of the cute ‘n compact variety. We give it the full rundown to see if its sound matches its looks.

Klipsch ain’t messin’ around with the SB-3’s packaging, that’s for sure. The sound bar/subwoofer combo came in the most humongous box we’ve ever manhandled for such a thing, what with its girth of almost 50-inches wide, 14-inches deep and 17-inches tall. We were expecting to find something the size of a Volkswagen bus inside, and the clamshell-packed sound bar nested in the top of the box did not disappoint. At just over 44-inches wide by 4.6-inches tall and 3 1/8-inches deep, the Klipsch SB-3 is certainly one of the largest sound bars we’ve ever laid hands on.

After unboxing all of the goodies inside, we did a more thorough examination of the SB-3’s components which left us quite impressed with the solid build quality of its constituent parts. Both pieces feature smoothly-finished surfaces, and the sound bar’s curved ends and removable grilles were especially nice touches. Taking a peek underneath those grilles, we noticed what looked like some high-quality drivers and a fancy pair of horn-loaded tweeters, both of which are not often found in more typical, entry-level sound bars. We also appreciated the sub’s large 10” woofer and its solidly hefty feel.

Even after taking all of the pieces out of that monstrous outer box, we still had two unopened, subwoofer-sized boxes inside. At first, we wondered if Klipsch had made a mistake and sent us three subwoofers. But once we opened those boxes, we were saddened to find nothing but dead air waiting for us inside.

All of which means nearly two-thirds of the Klipsch SB-3’s packaging doesn’t even need to be there. Klipsch could probably make wrangling that thing much easier for the consumer if they really wanted to by eliminating all that dead space.

Perhaps the SB-3’s most notable feature, aside from its size, is its high-quality drivers.

We’re sure Klipsch had its reasons, like maybe the ease of storing and shipping something symmetrically-shaped or whatever. Plus, we’re pretty sure Klipsch uses the same packaging with different graphics for its sister companies’ other sound bar/sub combos. None of that, however, keeps use from wishing that Klipsch would attempt to make better use of its packaging resources, if only to make hauling this thing back from the store just a little bit easier.

Taking inventory of other items inside the box, we found a card-style remote control, one Toslink fiber optic cable, one pair of analog left/right RCA cables, a pair of L-shaped tabletop sound bar cradles, a wall-wart power supply, power cords, and user manuals.

Perhaps the SB-3’s most notable feature, aside from its size, is its high-quality drivers that are rarely, if ever, found in other makes of sound bars. Klipsch loads up its SB-3 with four 3 ½,-inch long-throw, injection-molded graphite woofers and a pair of aluminum compression tweeters with Tractrix-flared horns. Such a driver complement promises a high level of sonic fidelity that should compare to what Klipsch’s own full-size component speakers offer.

The SB-3’s 10-inch sub is also a nice change from the garden-variety 6-inch or 8-inch subs typically included with most sound bars. Its fiber-composite cone, dual rear ports, and downward firing design all point to a sub that’s not merely an afterthought but a serious design consideration. Its wireless connectivity is also a nice feature and should help broaden its placement options. Unfortunately, it’s unclear exactly how much juice is powering the sub and sound bar, since total system power is listed as “300 watts peak output power.”

Curiously, for all of its high-tech driver hotness, Klipsch’s SB-3 only has three total inputs: One L/R RCA, one 3.5mm analog mini jack, and one Toslink digital input with Dolby Digital decoding. Yep, you read that right—no USB, HDMI, coaxial digital, or other digital inputs. There’s no onboard Bluetooth, either.

Yeah, we realize many users will probably figure out a way to run all of their digital audio through their TV first and back out again, but this hassle could’ve easily been avoided just by including one more digital input. With all of the digital sound source options available today—including OTA broadcasts, cable or dish TV, video streaming STBs, and Blu-ray players, the SB-3’s lone digital input could potentially be a limiting factor.

Even sans break-in, the SB-3 sounded awesome straight out of the box.

Most manufacturers include some method of virtual surround processing in their sound bars, and Klipsch does as well. The SB-3 utilizes a simple matrix sort of 3D sound processing, which is said to work across several different listening positions in the room.

Other than 3D processing, the Klipsch SB-3 doesn’t have any sound adjustment features to speak of—no bass or treble controls, no selectable EQ presets, and no sub level control; the sub’s volume can only be adjusted from its back panel knob. Still, if the driver size, onboard power, and build quality of the SB-3 are anything to by, this sound bar combo should sound excellent nonetheless.

We decided to test the SB-3 the way we figured most users would, straight out of the box and without any break-in. Other components used in this review were a Samsung BD-C5500 Blu-ray Player, iPhone 4, Denon DCD-CX3 SACD player, HP Pavilion G6-2320DX laptop, and Samsung UN40C6300 LED TV.

Even sans break-in, the SB-3 sounded awesome straight out of the box. The huge, gutsy, and powerful sound easily filled our larger-than-average listening room with more volume than we could handle. In fact, we had a tough time getting the SB-3 to crack under any sort of sonic pressure.

Regardless of volume, it just played everything with an effortlessness that reminded us of Klipsch’s high-efficiency, full-size speakers. Whether playing metal, Mahler, or the Matrix movies, the SB-3 combo mightily impressed us with its clean, distortion-free, ultra-dynamic sound, injecting everything we listened to with a high dose of excitement.

Cueing up some choice scenes from The Dark Knight, Iron Man, and various other high-octane flicks we had on Blu-ray, the Klipsch SB-3 delivered cleaner, more rumbley bass than any other sound bar sub we’ve ever laid ears on. It could get low, too, consistently reproducing bass below 40 Hz in our room. We also thought the sub’s wireless feature was nicely convenient, since it meant we could try placing the sub in various locations around the room for the smoothest bass response.

As good as its bass and dynamics were, the Klipsch duo had more than just sonic booms in its arsenal. The SB-3 had a midrange clarity and openness that also reminded us of Klipsch’s more ambitious speaker offerings. For example, the SB-3 sailed through one of our favorite test tracks, “Paper Tiger,” from Beck’s Sea Change album, with a one-two punch of excellent instrumental separation and wide dynamic range that’s altogether rare for sound bars in general. This made warm vocal recordings, like D’Angelo’s “When We Get By” from his classic album Brown Sugar, sound buttery-smooth and free of any distortion or harsh transients.

Playing more challenging musical fare, like symphonic classical works, left the SB-3 unfazed. Listening to Esa-Pekka Salonen’s fine recording of Stravinsky’s The Rite of Spring, the giant Klipsch sound bar delivered enough of the tonal contrast and large-scale dynamic swings to sound extremely convincing. Time and time again, we had to keep reminding ourselves this was a sound bar we were listening to and not a pair of larger, freestanding speakers.

… having to swap Toslink cables whenever we changed sources was inexcusable for a product of this price.

The Klipsch SB-3 wasn’t completely without fault, however. Play any music where the upper mids/lower treble area is highlighted, such as massed strings or choral music, and at high volumes the sound can take on just a bit of hardness and extra brightness in this region. Still, this emphasis was very minor, and a far cry from the typically shouty mids and trebles from many of the horn-loaded speakers of yesteryear.

In fact, the only real gripes we had with the Klipsch SB-3 had to do with its functionality. Oh, it’s certainly easy enough to use, but unfortunately that’s because there aren’t any useful features to speak of. As previously mentioned, the SB-3 is devoid of any tone controls or subwoofer level adjustment, save for the volume knob on the sub’s backside. This obviously makes fine-tuning and level-matching the overall bass balance a major pain in the rear. While we didn’t think this was a huge deal in light of the SB-3’s excellent sound quality, including these features would’ve been a welcome, low-cost addition for a sound bar that sells for nearly $700 street price.

We do, however, think that having only a single digital input is a huge deal. Since we use at least three separate digital sound sources most days—a Blu-ray player, a digital cable box, and a CD player with an optical digital output—running at least one of them through a lower-quality analog inputs reeks of kludginess of the highest order, in our opinion. And having to swap Toslink cables whenever we changed sources was inexcusable for a product of this price. Many lower-priced sound bars have at least two digital inputs on board; we think Klipsch can afford a second one for the SB-3, too.

Lastly, we were more than a bit bummed the SB-3 doesn’t have Bluetooth connectivity on board. More and more sound bars include this handy feature for easy partnering with mobile devices, and many of them are quite a few ducats cheaper than the SB-3. Even the runt-of-the-litter but outstandingly-good Toshiba Mini 3D we favorably reviewed has Bluetooth on board, for goodness sakes. Again, not a deal breaker, but if scores of lower-priced sound bars can do it, so can Klipsch. Luckily for the SB-3, performance quality makes up for a lot in our book.

All in all, we have to say we really enjoyed our time with the Klipsch SB-3. Its overall sonic performance for both music and movies was, in many ways, the best we’ve heard from a product of its type. It sounded more like a good pair of stereo speakers than almost every other sound bar we’ve yet heard. Its volume seemed almost limitless at times, its prodigious bass was surprisingly deep, and its huge, gutsy and exciting overall presentation really won us over.

There is, of course, the matter of the SB-3’s functionality. Not having any sound-tailoring controls and only a single digital input is mind-boggling to say the least, especially in today’s streaming and digitally-connected landscape. But if your system is such that you’ll do just fine without more input options, and you’re looking for an awesome, one-component solution that doesn’t need to make any excuses for its sound, we’re betting you’ll love the Klipsch SB-3.