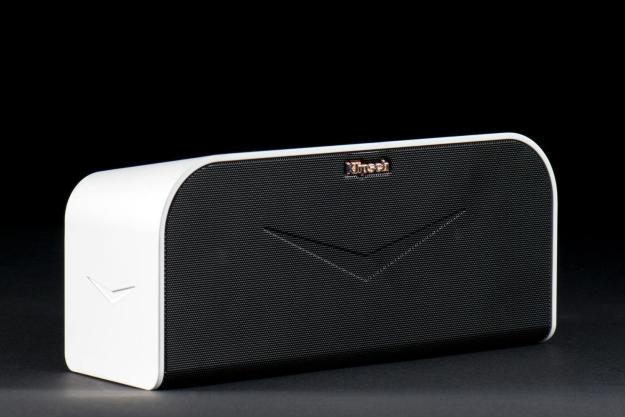 “The Klipsch KMC 1 combines power, balance, and plenty of bass in an attractive package that can be taken anywhere, as long as you don’t mind some extra weight.”

Klipsch is perhaps best known for its hi-fi home theater prowess, offering everything from high-end sound bars to premium tower speakers that cost more than a mid-sized sedan. Lately though, the company has looked more like a Bluetooth startup, moving aggressively into the super-saturated portable speaker market with models like the Gig, as well as its growing KMC series, named affectionately after the Klipsch Music Center outdoor amphitheater in Indianapolis.

The latest in the KMC family, the KMC 1, sits in the middle of the Klipsch portable lineup. It’s designed to be small enough to take on the road, but big enough to provide a powerful punch – especially down low. The speaker is molded from hard plastic into a sleek bandshell shape that mirrors the much larger KMC 3. However, at $300, it definitely relies on faith in the storied Klipsch name. We recently cranked the KMC 1 up to 11 to find out just how potent this mid-sized portable could be.

Opening the KMC 1’s shoe box-sized package revealed a smooth little casket of sound, with a matte white plastic enclosure accented in black and gold. The speaker looks like the KMC 3’s “mini me,” measuring just 4.3-inches high, 10.2-inches wide, and 3.4 inches deep. There’s nothing mini about its weight, though; pulling the 6.6-pound speaker from its box felt like hoisting a small cinder block.

… pulling the 6.6-pound speaker from its box felt like hoisting a small cinder block.

Robust speaker screens cover the speaker’s front and back which is just as well since that’s where you’ll be grabbing it for transport – the speaker has no handle. The front face also sports a gold, embossed Klipsch logo above an indentation in the shape of a dynamic ‘V’. Along the top is a smooth rubbery pad, perfect for gripping a phone, if you care to set one there. The pad is bordered by a cobalt band hosting a selection of illuminated, touch capacitive controls for volume, pairing, and fielding phone calls from an onboard speakerphone. Four rubber pads on the bottom aim to keep the speaker in place on smooth surfaces.

Inside the box: a 12-volt DC adapter, 3.5mm Aux cable, adapter plugs for U.S., U.K., and European outlets, and a packet of instructions.

The KMC 1’s size and bandshell design make it look a little like a live concert diorama. The effect is aided by some crowd noise that erupts from the speaker upon startup, conjuring images of a tiny rock band living inside somewhere.

While the speaker may not be as seductive as some of the supremely elegant and succinct devices we’ve encountered in the portable genre lately, it’s clean, with some attractive embellishments that draw the eye. Apart from our white review model, the KMC 1 also comes in a wide array of colors including black, blue, red, orange, yellow, and purple shells.

At the back of the speaker rests a small panel hosting ports for the power cable, a 3.5mm Aux jack, and a USB jack for charging a mobile device. The panel is also home to power switch.

The KMC 1 goes to bed early, sleeping if left to rest for around 5 minutes or so. As such, we found ourselves having to wake it up often by either stroking the top panel, or cycling the power switch. We took some issue with the KMC 1’s sleep schedule, however. We appreciate Klipsch’s attempts to save battery life, but when the speaker shuts down, it also disconnects, forcing you to walk over, wake it up, and then reconnect from your Bluetooth settings – not exactly the height of convenience.

The Bluetooth version employed by Klipsch is not listed on the site, but the speaker boasts the aptX codec for CD-grade sound with compatible devices. And the price, performance, and battery life all point to Bluetooth version 3.0 or better. Pairing can be done via NFC if your device supports it, or by holding the pair button.

The KMC 1 boasts an impressive battery life, claimed at a whopping 16 hours at medium volume levels. The number is especially notable given the unit’s hefty 10 watts RMS power to each speaker and its massive 40 watts peak power output. That formidable furnace is used to push two full range drivers measuring 2.5-inches each. Dual 3-inch passive radiators are also employed to handle the lowest frequencies.

Just like the KMC 3, the KMC 1’s bass response was big, bold, and beautiful. However, the KMC 1 seems to take a more balanced approach here. The speaker was able to produce a smooth and steady sound signature from top to bottom, lofting the more nimble upper register with a warm and thick foundation that hits the sweet spot of rock, pop, and hip-hop quite nicely.

Just like the KMC 3, the KMC 1’s bass response was big, bold, and beautiful.

One of the most brilliant examples of the KMC 1’s size-defying ability to rock a full and powerful sound came when we auditioned “Summer Song” by the Decemberists. The song starts out with a rich, crushed snare tone, which bashed its way out of the KMC 1 with depth and presence. As the full band kicked in, we felt warm waves of bass riding through the couch we had perched the speaker on, with thick bass lines and pounding kick drum. And the swell of vocals, acoustic guitar, and accordion rode along the upper crest with deft clarity.

Moving on through a long list of selections, the speaker continued to prove it had a right to hang out in the doldrums of the sound. It handled the crunch of synthesizers and bass loops from the new Broken Bells record with heavy body hits, while also sharing the wealth above with light, luminous attacks from cymbals, and plenty of power in the midrange instrumentation. And even when we called up our formidable bass test, Too Short’s “Just Another Day,” the hits in the main groove held up down into the 80Hz range where they, understandably, began to drop off quickly.

The sound never hit hi-fi levels in the more intricate layers of the sound, however. When we called up “Beyond” by Daft Punk, for instance, there were swirls and carvings in the back layers of the sound that were left behind to fend for themselves. We expect that from a portable speaker in a lot of instances, but we had hoped that, with its $300 price tag, the KMC 1 would handle the deeper layers with more delicacy. We found similar lackluster moments from other electronic tunes and acoustic tracks alike, wishing for more detail from the second-string instrumentation.

Mostly though, we spent our time enjoying the warm pulse of the mids, the light, yet never sharp attack of the treble, and that heavy shelling from the low end. It may not be as hard to find big bass in portables as it once was, but there’s often a toll to be paid with either too much distortion, buzzing of the cabinet, or not enough balance with the frequencies above. With the KMC 1, we didn’t have to make those concessions, making it an excellent musical companion to have around.

For giggles, we pitted the KMC 1 against the Beats Pill XL in a side by side shootout to see how the KMC 1 could compete in the low end. On the heaviest tracks we auditioned, we give a slight edge to the Pill XL as it reached deeper with more authority. We also caught a slight bit of distortion in the KMC 1’s lower mids when we cranked it to full throttle. However, the KMC 1 held up much better in the rest of the spectrum. The difference in the presence and clarity of the midrange was almost night and day when we bounced back and forth between the two competitors. In comparison, vocals and higher percussion from the Pill sounded muffled and recessed, as if pushed too far back inside the speaker’s enclosure. Even if bass is paramount, we think listeners will appreciate the more balanced approach of the KMC 1 when it comes to listening over extended periods.

The Klipsch KMC 1 combines power, balance, and plenty of bass in an attractive package that can be taken anywhere – as long as you don’t mind some extra weight. We wish the speaker was about to expose some of the finer, more delicate aspects of certain, and we also think it’s priced about $50 too high. Still, it blasts enough sound to be useful in multiple applications, and once you hear what it can do, we think you’ll find it worth the extra effort of bandying this burden around. If you don’t mind paying a little extra, those searching for full sound in a portable package would do well to give Klipsch’s KMC 1 a shot.