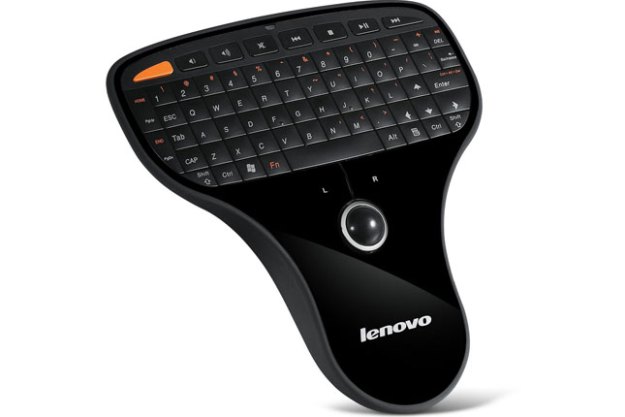 Much like Logitech’s diNovo Mini, Lenovo’s multimedia remote with keyboard attempts to consolidate the unwieldy keyboard and mouse you use at a desktop computer into a single, handheld unit fit for the couch. While it makes clever use of a trackball and costs less than half as much as the diNovo, flaky wireless performance and a lack of backlighting make the more expensive controller look worth the money.

If your first thought upon laying eyes on Lenovo’s multimedia remote is how exactly you should hold it, you’re not alone. The controls have been arranged into a rounded-off T shape, with the keyboard spanning the top, left and right mouse buttons (but no middle mouse button) below it, and a marble-sized trackball dead in the center. You can type with your thumbs by holding it at both ends like a smartphone at the top, or mouse around by holding it with one at the bottom, but not both simultaneously. Around back, the remote has a curved, finger-friendly design with a rear door that accommodates both two AAA batteries, and a nano-sized USB dongle.

The light, slightly hollow-feeling weight of the controller makes it easier enough to wield for long periods, but it also contributes to a slightly cheap feel that might not be welcome in a high-end home theater environment.

Compared to the hassle of dealing with Bluetooth accessories, the Lenovo multimedia remote is an absolute breeze to set up. Just pop in the included AA battery, connect the USB receiver, and you’re controlling your computer from afar – no driver installation necessary. While it uses the same 2.4GHz band as Bluetooth, and advertises the same range of about 30 feet, in practice it started to behave erratically only 15 feet away. Plugging it into the back of a home theater PC seemed to limit the usable range to only a few feet, and while plugging it into a front port significantly improved reception, it still suffers from line-of-sight issues – a misplaced TV tray is all it takes to turn mouse movement from fluid to a series of jitters.

That said, when it works, it works well. Retro as it may be in the current world of touch-screen everything, the tiny trackball on the remote is both quick enough to snap a cursor from one side of the screen to the other, and precise enough to easily select text by the character. It does, however, require two hands for complete comfort: one to steady the controller and press the mouse buttons, one to move the ball. Don’t throw us in a Call of Duty game with it, but for navigating the desktop, it feels about as natural as mousing gets on the couch, after a slight learning curve. We did, however, miss a scroll wheel for easily drifting down Web pages or even adjusting volume, and a middle mouse button.

Things take a turn for the worse with the keyboard. Lenovo nailed the size factor with keys that are big enough to accurately jab a thumb into, but left them far too flat to confidently type without looking; there’s just enough going on under your thumb to discern which key you’re on. That’s even more unfortunate considering that unlike the diNovo Mini, Lenovo’s multimedia remote lacks backlighting for the keys, which left us squinting, swiveling it around in the dark for the right angle, and sometimes even getting up to turn on a light to find the right keys. Throw in the reception issues, which will mean that not all key presses reach the screen, and you have the perfect storm for a frustrating typing experience. We were able to use it for entering Web addresses, Google searches and executing program shortcuts, but typing out an e-mail or even a quick IM would be impossible. Give us an iPhone, any day.

Credit goes to Lenovo for transplanting the trackball to the couch, where it works surprisingly well, but poor connectivity, flat keys and a lack of backlighting all hold this controller back. Its most redeeming quality might be the $60 price tag (more like $43 on the street), which will still make it attractive beside the $150 diNovo Mini, for those who are willing to deal with hassles.