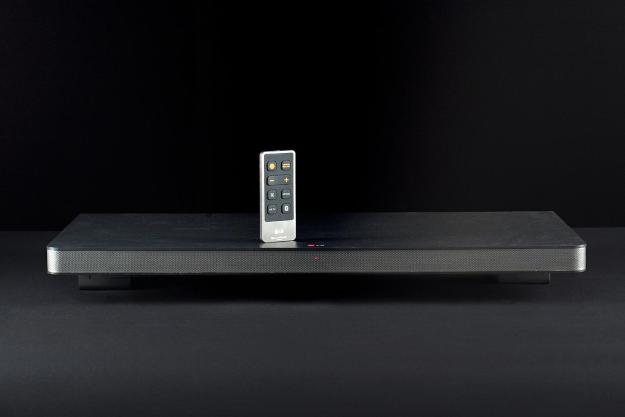 In the wide world of compact home theater solutions, the latest and most succinct design comes in the form of the sound platform (or plate, or pad, or pancake, etc.). These new ultra-slim devices take the simplicity of sound bars a step further, squashing speakers down into a base pad that’s designed to support your flat screen TV, both sonically and physically. There’s no need for mounting or rearranging; just slide the unit on your TV stand, and place your set right on top.

LG’s LAP340 SoundPlate is one of the first and smallest of this new breed. Sized smaller than the width of many larger TV mounts, the Sound Plate can either support or sit under flat screens up to 55-inches and 83 lbs, and is packed with a 4.1-channel set of drivers charged by 120 watts of power. We recently brought the SoundPlate home to find out if this tiny slab could deliver enough punch to make it worth its cheeky $400 price point. Here’s what we discovered.

Even as small sound systems go, the SoundPlate is a miniscule device. As we pulled the slab from its box, it looked more like a jumbo-sized Blu-ray player than a speaker system. Official specs for the device measure just over 28-inches wide, 12-inches deep, and 1.3-inches high. In fact, we venture to guess that in many home theater setups, the SoundPlate could easily go unnoticed by the less observant.

Those who do notice will discover a sleek little unit, with twin plates of dimpled plastic at the top and bottom, and a speckled speaker screen in the middle, bending into two bass ports at the back corners. There are no outstanding features to break the unit’s minimalist stride, save a small control panel and a couple of input ports located at the back.

Contrary to the SoundPlate’s chic design and solid feel, we were surprised to find a rather flimsy remote control in the box, cloaked in a faux metal strip of shiny carbon, and lined with a short selection of large, rubberized buttons. Accompanying accessories included a power cord and digital optical cable (thanks, LG!), a packet of instructions, and a single coin battery that took us a surprisingly long time to track down in the plastic baggy.

Like the KEF V300 system we recently reviewed, LG’s SoundPlate is designed with absolute convenience and simplicity in mind. To that end, it is supremely easy to setup and to use, but it also skips out on some basic traits we take for granted in a sound system at its price point. Whether or not the system appeals to you may depend on how simple you like your service.

The SoundPlate was an immediate sonic upgrade from our flat screen TV’s onboard sound.

The SoundPlate offers only one form of physical connection, supplied by the optical port which connects from the output of your TV or Blu-ray player. The only alternative is to connect wirelessly via Bluetooth 3.0, which allows for connection to LG TVs via the company’s proprietary Sound Sync feature, or to play music from a smartphone or tablet. With either connection, the system powers on automatically, allowing it to easily default as the TVs primary sound source. However, unless you own an LG TV, you’ll still have to use the supplied remote to control system volume. The auto power feature can also be disengaged using a switch at the back of the speaker.

The controls on the remote are extremely succinct, including only volume and mute keys, power and source selections, and a button at the top labeled Cinema Sound, which selects the unit’s only form of EQ/effects. Engaging Cinema Sound expands the bass and widens the system’s onboard virtual surround sound. Again, it’s quite simple, but we wished there was a larger range of EQ options.

The system offers no real display screen, though at this size, we can’t imagine where LG would have put it. Instead, all communication is shown through a small collection of LEDs at the front in a sort of shorthand color code detailed by the manual. The red LED glows when the system is powered on, and blinks when volume or source is changed. A green LED flashes when Cinema Mode is engaged, and an orange one shows up for Bluetooth pairing.

The cabinet sports two main drivers, two surround speakers and, carved into the underside, a pair of exposed down-firing subwoofers. Each of the six speakers in the system has been delegated 20 watts of power from the system’s 120 watt amplifier. Other features include Dolby and DTS 2.0 decoding, and a DSP circuit for virtual surround sound.

Though a little sharp and cold in the treble, the SoundPlate was an immediate sonic upgrade from our flat screen TV’s onboard sound. The improvement was especially noticeable when watching action-packed movies. The unit excelled at stereo spacing and dialog, bringing a pleasant amount of detail to the table, while spreading out sweeps of helicopters and other flying objects, as well as general on-screen movement across its relatively expansive wall of sound.

Contrary to the SoundPlate’s chic design and solid feel, we were surprised to find a rather flimsy remote control in the box

We took our first ride with Nolan’s The Dark Knight. We were actually a bit surprised at how well the tiny plate handled lower midrange action like gunshots, and smaller explosions, supplying an impressive burst of power from the dual subwoofers. Meanwhile, subtleties were well exposed, with clear and nuanced dialog, even from Christian Bale’s Batman grunts. Other nuances like footsteps, gun clips being switched out, or the jingle of the chain holding the Joker’s attack dogs were extremely clear, as were changing aural environments, such as a character’s voice reflecting off of an office window.

When it came to the bigger moments of the film, such as the hospital explosion, we were less excited. There was certainly more power than our TV’s lame speakers, but the depth of the impact felt restrained, and there seemed to be a little phasing at the attack of some of the eruptions. We had similar issues with Star Trek Into Darkness, where we wished for more from the explosions and the impact of the Enterprise going into warp. On the other side of the coin, as apartment dwellers, we were glad for the restraint, and secure in the knowledge that we could use the speaker even late at night without drawing the ire of the folks downstairs.

There were a few noticeable holes as the sound moved between the main drivers and the subwoofers, especially with the Cinema mode engaged. We enjoyed the effect for most movie content, but switching between its on/off position evoked a little of the goldilocks effect: this one’s too hot, that one’s too cold. Occasionally, there was too much beef in lower register dialog that made things slightly cloudy, while the top side could be a little sharp and flat. That said, the solid detail, especially in dialog and midrange action, continued to draw us back in, and the system had more triumphs than failures, especially with action flicks.

Broadcast TV was a little more hit or miss. Depending on the content, the system ranged from warm and attractive sound, to flat reproduction that was only marginally better than an average TV on its own. Occasionally the content sounded too sharp, especially in high end instrumentation, or lighter dialog, forcing us to turn the system down.

Music is not this system’s forte. Playing music exposed even more balance issues, with holes becoming prominent throughout the frequency spectrum. The dual subs pushed some decent power from the bass up into the lower midrange, but were often too full and had a tendency to rattle against our TV stand. Up top, the clear treble occasionally overshadowed the midrange, which seemed to get sucked into the background on some songs. We again found ourselves wishing for some form of EQ control to temper the balance quirks that arose.

Overall, LG’s SoundPlate could be a legitimate choice for your compact home theater solution, though with some real reservations. At $400, it’s a bit pricey, and it doesn’t offer the same level of power, warmth, or full range accuracy as more affordable sound bar/subwoofer combinations such as Pioneer’s Andrew Jones. Then again, it comes with a completely different form factor and eschews a stand-alone subwoofer. For music and some TV content, the device also displayed some balance issues between the bass and the upper frequencies.

However, for movies, especially action flicks, the SoundPlate’s diminutive size, tempered bass response, and accurate upper register provides those with less space – and close neighbors – a convenient way to improve their anemic TV audio. If you’re mostly just looking for a way to spice up your Blu-ray collection, without drawing the ire of those above or below, LG’s SoundPlate is a clean, simple solution, and worth a look.

QLED vs. OLED: Which TV technology is best?