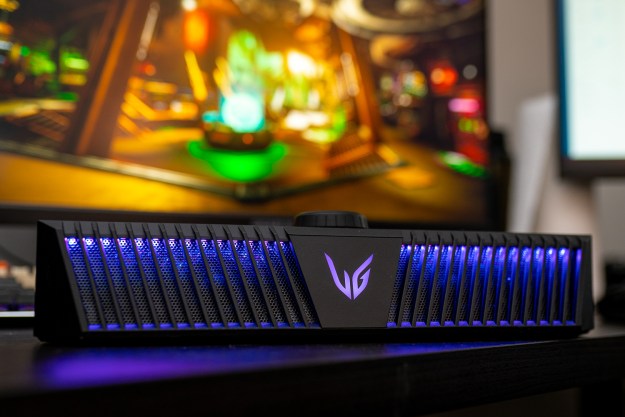 “The LG GP9 is an incredible speaker that's only as good as it price allows it to be.”

LG’s UltraGear brand is known for gaming monitors, but it’s branching out. The GP9 gaming speaker is LG’s first attempt to establish UltraGear as a gaming brand beyond the realm of monitors, and hopefully get LG into the conversation when it comes to the best gaming speakers. It’s a solid attempt, but one that’s unfortunately marred by nagging oversights and an astronomical $500 price tag.

It seems LG designed the GP9 in a vacuum, outpacing alternatives like the Razer Leviathan and Panasonic SoundSlayer by a few hundred dollars. On paper, the GP9’s features are what justify its higher price — a built-in microphone for voice chat, support for hi-res audio, and wireless operation on the built-in battery. In practice, however, these perks don’t add up to match the price LG is asking.

Immediately after unboxing and setting up the GP9, I was floored by its performance while gaming. This is among the best gaming speakers, and there’s no way to deny that, but it’s hard for the GP9 to remain in the conversation when speakers that cost half as much sound almost as good.

The GP9 includes three inputs and two output. For inputs, you can connect it through the USB-C connector, an optical cable, or Bluetooth. That’s a solid assortment of options, though I have to imagine most will default to using USB, which is what I did throughout my review.

Bluetooth is a nice addition, but I wouldn’t want to use the GP9 as a Bluetooth speaker. It’s big and bulky, for one, so it’s not the best travel companion, and it doesn’t have an IP or water-resistance rating, so it’s not a great idea to leave it outside. Even with those issues, the real killer is battery life.

The GP9 has a built-in battery that LG says can last for five hours, but even that’s generous. During a morning with sparse usage for video calls and the occasional YouTube video, the speaker held up for just shy of four hours. Blink, and the GP9 is dead.

In addition to the the inputs, the GP9 includes a headphone output. This port supports DTS Headphone:X for virtual 7.1 surround sound, but this is less of a feature and more of a plus. The GP9 is a $500 gaming speaker, after all, so it would be a shame to plug in headphones just to use virtual surround sound.

Using the GP9 for the first time is the equivalent of putting on a pair of the best gaming headphones. The soundscape suddenly opened up, sound effects felt like they had impact, and music complemented the game audio instead of working against it. If you’ve used a high-quality gaming headset, you know already know the experience the GP9 provides.

In Deep Rock Galactic, the synth-ridden soundtrack perfectly overlayed the sound of the drill through stone, and the sound field seemed to stretch from one end of the room to the other. My desk is in the living room, but even still, the GP9 enveloped the space.

The default sound profile sounds great. I took it out for a spin in a few rounds of Call of Duty: Vanguard and Halo Infinite, and I was able to pick out footsteps, bullet sprays, and explosions all around me. LG’s 3D Gaming Sound may seem like a gimmick, but it works.

In addition to the default profile, the GP9 includes an FPS profile and an RTS profile. The names are irrelevant, even if these profiles sound great. The FPS profile has more of a forward presence with a lot of the sound moving to the center of the sound field, while the RTS profile pushes things off to the sides, as if the floor dropped out from the frequency range.

There’s no denying that the GP9 sounds excellent in games.

The GP9 sounds great for games, expertly placing the smallest nuances around the sound field in a way that even separated 2.0 systems fail to manage. It’s tough to ignore the cost, though. At $500, sound isn’t enough. The Razer Leviathan sounds great, too, and it’s half the price, and it includes a dedicated subwoofer.

Movies and music take a back seat

The LG GP9 is a gaming speaker, and that shows through in the sound quality in other mediums. It’s tuned for playing games, not listening to music or watching movies.

Music was the biggest pain point for the GP9. I started with stressing the bass, loading up DNA by Kendrick Lamar and See You Again by Tyler, The Creator (which turned into a full listen of Flower Boy, as it often does). For $500, I wasn’t impressed. The GP9 sounded fine, but no better than a $200 Bluetooth speaker like the Sonos Roam.

With music, the main issue was consistent bass. Songs with a consistent low-end — such as a metal track like Circle With Me from Spiritbox — worked well, but any sort of dynamic low-end fell apart. The GP9 is subject to the compression that often comes with smaller speakers, with the high-end ducking out of the way for just a moment while the bass thumps.

And the bass thumps. The two passive bass radiators kick out some impressive low-end for such a small speaker, perhaps even too much. Sonically, it’s not too heavy on the bass, but the speaker consistently vibrated forward on my desk while listening to music, even at around half volume.

When watching movies or listening to music, it was as if I was using a completely different speaker.

On the other end of the frequency spectrum, there are still issues. The speaker is very bright, and it doesn’t separate the higher frequencies when the volume is turned up. I couldn’t counteract the issue with EQ, only dull it. A couple of larger satellite speakers, such as the Logitech G560s, can handle those higher frequencies with more grace.

If you want to listen to music, stick with headphones. Through a flat pair of cans like the BeyerDynamic DT 770 Pros, the quad DAC shines. It supports hi-res, lossless audio, and I could pick out the bright top-end, warm bass, and massive sound field compared to my PC’s sound card immediately.

Movies were better on the speaker. I watched Dune and Shang-Chi and the Legend of the Ten Rings, and Dune sounded great. Moving from ambient to bombastic in the score felt natural, and the soundscape, although narrow, still felt much wider than the speaker. Shang-Chi brought me back down to Earth, with the sound seeming to funnel up in the harsh upper midrange.

Even with a bright spot in Dune, this isn’t a speaker I’d use outside of gaming. When watching movies or listening to music, it was as if I was using a completely different speaker.

A perk of the GP9 over gaming speakers like the Panasonic SoundSlayer is that it includes a microphone, but the quality isn’t great. It’s only slightly above a laptop’s microphone, though it was able to cleanly pick up my voice from a few feet away.

What impressed me more was LG’s noise canceling. LG calls it Clear Voice Chat technology, which sounds like nothing more than a bullet point on a product page. Thankfully, it’s more. Even when listening at a comfortable volume, the microphone was able to separate my voice from the speaker’s audio, and that’s tough to achieve.

The microphone is a voice chat solution, just not a great one. Clear Voice Chat is an impressive addition, but I would choose most other microphones over the one inside the GP9. You’ll get far better quality with a $150 headset that has a boom mic, such as the Corsair HS80 Wireless.

The app: A case of compromise

The LG GP9 is designed for gamers, not by gamers, and you don’t need to look further than LG’s XBoom app to see that. The app isn’t bad, and using it to get the GP9 set up how I liked only took a few minutes. But it’s absurd that a speaker designed for PC gaming doesn’t have a desktop app.

To link the speaker, you need to pop it over to Bluetooth, download the app, pair it with your phone, and then switch back to your original audio source. That took me about 30 seconds. Here’s the problem: Turn off Bluetooth, and you have to repeat the process all over again. It’s not bdeal-breaking, but XBoom still feels like a half-baked solution.

In the app, you can adjust the EQ curve, change the RGB underglow, and update the firmware of the speaker, as well as access all of the functions that are available on top of the speaker as buttons. It’s not a bad app, but a desktop version would go a long way in rounding out the GP9’s list of features.

LG has pitched an attractive piece of kit with the GP9. It’s a speaker that delivers on the experience of a gaming headset without the annoyances, fit with a wide sound field, built-in mic for communication, and a healthy dose of RGB flair. At $300, I would be singing the GP9’s praises. At $500, it’s an excellent gaming speaker that you shouldn’t buy.

It’s one of the best gaming speakers sonically, but sound isn’t enough for a speaker that costs as much as a new console.

Dozens. The Razer Leviathan and Panasonic SoundSlayer are the most obvious alternatives, but there are several other options for gaming. Those include the Audioengine A2+ speakers and Logitech G560 kit, both of which are cheaper than the LG GP9.

Without using the GP9 for years, it’s hard to say how long the speaker will hold up. LG offers a standard one-year warranty for parts and labor.

No, unless you can get one on sale. The GP9 is too expensive for what it is, and its positive qualities are outweighed by its price. If you can pick one up for around $300, though, it’s an excellent option.