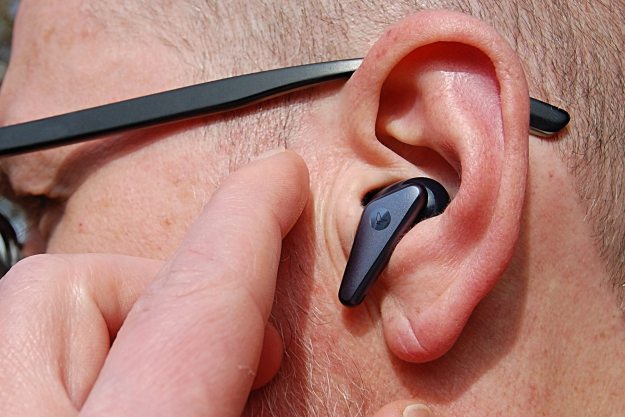 The Libratone Air+ are wireless, stem-style earbuds priced at $229 to compete with Apple’s AirPods Pro, Jabra’s Elite 7 Pro, Sony’s WF-1000XM4, and KEF’s Mu3. They’re aimed at folks who want a set of noise-canceling earbuds that offer an attractive alternative to Apple’s ubiquitous AirPods design. On that count, the Air+ deliver, and they sound terrific, but there is a weakness in call quality that might well give you pause if you spend a lot of time on the phone. Here’s what you need to know.

The Air+ do feel premium, in the sense of being solid, well-made, and attractive in a minimalist, self-confident way. The case is a round-edged rectangle in a flat black color with an attractive finish that’s adorned with a flat, metallic indigo songbird logo resembling Drake’s OVO owl. The case lid is hinged at a severely oblique angle and opens to reveal large charging alcoves.

With the large silicone tips in place, and a good seal achieved, I found the Air+ to be very comfortable.

Unlike with some other cases, I never fumbled to get the Air+ into their correct spots, and their strong magnets keep them securely fastened. The sheer face of the Air+ charging cradle alcove allows for some additional premium details, such as separate “L” and “R” designations that light-up to reassure you that the case is doing its charging job.

The earbuds themselves offer a unique triangular stem design that I find differentiates them from many of the other stem designs in the category. I found them very attractive, and easier to seat into my ears, since the triangular angles gave me fingertip purchase that I never find with the glossy, near-frictionless surface of many other stem-style earbuds.

Three standard sizes of (S, M, L) silicone eartips are offered. I’ve come to realize that my earholes are, consistently, at least “large” across virtually every brand of earbuds I’ve ever tried, but the large tips worked fine for me.

The Libratone app offers a way to check this, however, with an “eartip fit test” (AirPods Pro have a similar feature). With the Air+ buds inserted, the app plays a brief tone that must measure sound leakage, before reporting back with a good seal or poor seal pronouncement. As part of the initial setup of the buds, I found this very helpful by reassuring any lingering insecurity I might have over whether I had the earbuds seated in the best way. I started playing a game with myself: “which ear has a poor seal?” before double-checking the feature in the app, and was soon winning every time. After half a day of this game, I could feel the difference immediately in my ears, suggesting that I would not have to use the app feature much, moving forward.

The Air+ charging case is fast. It took my totally dead Air+ to full charge in about 50 minutes.

With the large silicone tips in place, and a good seal achieved, I found the Air+ to be very comfortable (they feel extremely light; at 5.5g per ‘bud, they’re comparable in weight to the Apple AirPods Pro and the Jabra Elite 7 Pro). I wore them for long hours without any ache or discomfort. The Libratone Air+ earbuds are also designed to be sweat- and splash-proof (up to the IP54 standard), and they certainly handled my cardio workout sweat without a hiccup.

Libratone claims its Air+ earbuds are good for six hours of battery life, and I certainly found that to be true with the active noise cancellation (ANC) turned off. With the ANC turned up to maximum (30 decibels or dB), the earbuds’ battery is closer to five-and-a-half hours, when my right bud gave out.

The Air+ charging case is fast. It took my totally dead Air+ to full charge in about 50 minutes. By comparison, Apple AirPods Pro take a little over an hour and the Jabra Elite 75ts take over two hours to charge. As claimed by Libratone, the case is good for three full charges of the earbuds, after which it drops immediately to zero, with no middle ground. The case works with both the included USB-C cable or with any flat, wireless charger. Rather than the typical pinprick of red light, the perimeter of the charger’s USB-C port lights up white when charging in both scenarios — an attractive look.

The Air+ connected to my phone seamlessly and quickly, both directly through Bluetooth or through the Libratone app (free, but account creation is required).

The Air+ come with a setting called “wear detect” auto-enabled. It detects when your earbuds are inserted and removed from your ears, and pauses/resumes your music accordingly — a very useful feature that’s found on other higher-end earbuds. I’d have been disappointed to not see it here.

The Air+ offer a standard tap control system on the center mass of the earbuds. Double-taps on either ear will pause/resume music; a triple-tap will engage two noise reduction modes, “transparency” and “comfort.” These taps work immediately, no delay. But in the app, there’s considerable further customization available. You can enable double-taps or triple-taps on either ear to activate all three ANC modes, which adds “adjustable” to the mix. This mode allows you to turn a circular dial in the app from zero dB to the maximum 30dB of noise reduction. I’m not sure exactly when I would want to tweak the exact decibels of my ANC, but it’s an impressive degree of control over the feature (if a bit gimmicky).

I could happily spend hours listening to music on the Air+ without complaint.

Unusually, one of the app’s customization options enables you to switch the inputs of the earbuds between different, previously paired devices, like your mobile to your laptop. A wonderful idea, but I found this feature to be twitchy in execution. I had better luck tapping between my laptop and my desktop; for some reason, tapping between either of those and my mobile was inconsistent. On several occasions, I had to re-pair the Air+ with my mobile to prompt its connection. This is annoying, since device switching is only really useful when one of your devices is your mobile. But when the switching feature worked, it was wonderful.

Bluetooth connections on the Air+ are solid. I was able to walk 90 feet away from my phone before detecting any shakiness in the music I was playing at the time. Even at 120 feet, the connection was pretty good in a singular spot and only faltered when I started walking around at that distance.

Speaking of which, the earbuds can detect when you’re walking, or on a call, by showing you doing such things as a line-drawing figure in the app. Although it’s fun, it’s helpful only as further proof of the smarts of the Air+. My prediction is that nobody would look at it beyond the first week of ownership (if that).

Overall, the Air+ sound great. In an immediate, moment-to-moment focused comparison with my AirPods Pro, I found the sound quality of the Air+ to be slightly cold, lacking some of the more rounded midrange warmth I hear in the AirPods Pros. But in normal use, simply letting a playlist run, I was more than content. The quiet guitar string squeaks of the acoustic I Just Don’t Think I’ll Ever Get Over You by Colin Hay were realistically sharp, and the scorching bass notes that launch Radiohead’s Airbag were tight and fully realized. I could happily spend hours listening to music on the Air+ without complaint.

As great as the Air+ sound, it’s possible that the iOS experience could be even better, if only they supported the AAC Bluetooth codec. But with only SBC and aptX, you’re stuck with the old SBC codec.

My only very minor quibble is with their equalizer settings, found deeper in the app. There are four settings: Smart (also called auto), neutral, extra bass, and enhanced treble. I could not, for my life, detect any difference between any of the four settings, even after multiple attempts over several days and across both calls and music. At lower volume settings, under 50%, I would have liked to bump up the bass a bit, but over 50% volume, there’s plenty of everything.

Noise cancellation and transparency work extremely well on the Air+. Initiating the default, “smart” mode called “Comfort” results in a satisfying, audible muffle as the ANC thumps in like a heavy blanket. There’s not much for the so-called smart aspect of the noise cancellation to work with in a quiet inside environment, but outside is different. That’s where the ANC shows its smarts, and it also works very well, although you’ll need to have the app open to really appreciate it.

Outside, with the app open, you can see that the earbuds are making ongoing ANC assessments of how much noise reduction is needed to keep you in the comfort zone. When the wind kicks up, the app announces “wind noise reduction” in text; closely passing heavy trucks and buses prompt “high noise environment.” It’s not something I think I would spend much ongoing time monitoring, but it’s impressive on first look.

Beyond the app’s announcements, the ANC works so well you barely register it. I only noticed its limitations listening within four feet of passing 18-wheelers going about 30 miles an hour, and that challenge resulted in only some clipping of the higher frequencies.

With access to the noise cancellation modes on the buds themselves, you can switch back and forth between modes on the fly – you’re not locked into a mode once a call or a music track has started.

It’s in call quality that the Air+ finally disappoint. All of my test callers said the same thing: To them I sounded echoey, tinny, and like I was talking through a can. When I switched over to the AirPods Pro in the middle of a call, I was told the difference was very clear and immediate. Complaints about how I sounded during a Zoom call were bad enough that I had to abandon the Air+ completely. If you’re planning on taking a lot of calls, this could be a major problem.

The Libratone Air+ earbuds are attractive, great-sounding earbuds seemingly aimed at audio-centric shoppers who are looking beyond the ubiquitous, smooth design championed by Apple. The Air+ offer impressive customization, as well as useful app features like eartip fit testing, and unique features such as in-ear device switching. But that app feature is unreliable, and the Air+ experience is marred by poor call quality.

Apple’s AirPods Pro offer a similar quality of audio experience, but are superior in reproducing your voice – as long as you’re content to join the ranks of Apple owners. And Jabra’s Elite 75t, at almost $100 cheaper than the Air+, sound just as good with nary a single caller complaint.

Overall build quality is excellent, and the one-year warranty period is solid. The only area of concern is battery life — at about six hours, that will drop to three hours as the battery ages and loses its capacity.

If you want a high-quality audio experience and like the look of stems, but want to sidestep the Apple ecosystem (and aren’t as worried about how you sound to your callers), then yes.

But if you spend a lot of time on the phone and your callers’ experience is important to you, then no, there are better options that combine great audio with phone call excellence.