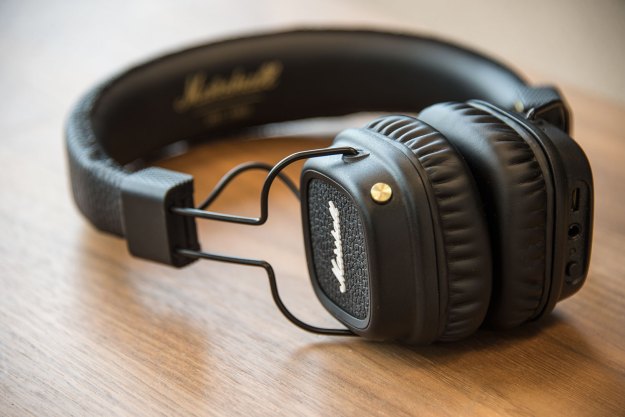 “The Marshall Major II Wireless are best-in-class headphone – a slam dunk choice at this price.”

It’s rare for a company that licenses a brand for name recognition and style points to exceed expectations, but Marshall Headphones has been doing just that since its launch a couple of years ago. With design hallmarks of one of the greatest names in rock as inspiration, Marshall Headphones has carved out its own identity by crafting solid cans and Bluetooth speakers that not only bring Marshall’s iconic style to bear, but also offer good sound and clever design elements to boot.

Following the common theme of the age, the latest from Marshall Headphones adds the convenience of Bluetooth to the company’s value-packed on-ear cans, the Marshall Major II. The Bluetooth version build off the smart design of their predecessor, adding to the textured earpieces and near-indestructible headband with intuitive on-board controls, effortless wireless playback, and battery life that goes for days. It’s a brilliant move for a company that already trades in Bluetooth sound on the speaker side. And though they’re not without their quirks, at $150, the Marshall Major II Bluetooth beg everyone to come out and play.

Fans of the original Major II will feel right at home with the Bluetooth version, as Marshall has wisely kept all of its key design traits in place: Marshall’s familiar logo embossed in white, gold embellishments on the inside of the band and at the tips of the guitar-style cable (for those times you need to plug in), and dimpled texturing along the exterior, meant to emulate Marshall’s iconic speaker cabinets.

As for build elements, the headphones sport a contortionist headband which twists and turns to your heart’s content with no ill effect, as well as earpieces which fold in on hinges for more compact storage. Of course, with the addition of Bluetooth comes a taut collection of on-board controls.

At the bottom of the right earpiece is a Micro-USB charging port, a 3.5mm input to plug them in, and a power/pairing key you can hold to turn the cans on and off, or double tap to pair. Tucked on the bottom corner of the left earpiece is a flashy gold control key that accounts for our favorite new design element. The button can be a little difficult to locate with the headphones on, but once you get the hang of it it’s a brilliant little control point. You can, of course, tap it to answer calls and pause/play music, but it also allows you to nudge it up and down for volume control or left and right for song skipping. It’s utterly simple and efficient for full command over your tunes without fumbling for your device.

The contortionist headband lets you twist and bend the cans to your heart’s content.

Beneath the squishy padding of each removable earpiece, rattan stitching covers 40mm drivers with a claimed frequency response of 10Hz-20kHz. They appear to be the exact same as those in the original Major II, but they’re actually packing some extra junk in the trunk (more on that below).

While the Bluetooth connection is a little noisy when it kicks in, it’s also extremely solid. The connection extended well beyond the common 33-foot range in our testing as we meandered through the office and away from our device — even around hallways and through doors. The addition of aptX also allows CD-like sound quality on supported devices, and minimal sync issues. Perhaps most impressive, though, is the 30-hour battery life, which puts these cans at the top of their class — a notable distinction that can’t be overstated.

Comfort was a key feature for the original Major II and nothing’s changed with Bluetooth streaming tacked on. The cushy pads offer plenty of support, and while we wish there was a bit more padding on the band, it’s easy to wear these cans all day without issue.

As one might expect, the Major II Bluetooth offer a very similar experience to their wired counterpart. That includes a warm and ruddy sound signature, with a brassy cut to the attack of midrange instruments, full and punchy bass, and plenty of of instrumental separation that allows for some impressive detail.

Like their predecessor, the headphones are rolled off pretty heavily once you make your way into the higher frequencies, which puts the kibosh on some of the sparkle in flashier instruments, especially notable on cymbals and snappy snare. While that may make more discerning listeners long for more extension and accuracy up top, it also makes for a comfy ride, smoothing out the sharper moments on your hottest tracks.

The flashy gold button is a brilliant little control key for music and phone calls.

The one issue with the Major II Bluetooth in comparison to its wired companion is one we’ve noticed a lot when headphones move into the wireless realm: a spike in the mid bass. The phenomenon appears to stem from the built-in amplification – the same issue has occurred with several wireless renditions, including V-Moda’s M100, and Sennheiser’s Momentum Wireless.

The Major II Bluetooth’s extra oomph is mostly notable in songs with thick bass tracks (especially stand-up bass) or heavy tom drums. The effect can make the instruments positively glow and take up more room than they’re due, even putting a bit of a haze in the guitar and vocal tracks. For many songs, such as Brett Dennen’s San Francisco, it’s barely noticeable, adding just a bit more groove to the mix — the Major II have always leaned a little big down there anyway. However, on the very next tune on the record, Make You Crazy, the bass and floor toms get pretty pushy, taking over the bottom third of the frequency spectrum with authority.

That said, the occasional bass bloating was more of a quibble than an all-out complaint — especially at this price point. Moreover, most listeners in the Beats era go in for a heavier sound than this reviewer cares for, and those who love some extra force down low may dig the sound of the Major II Bluetooth even more than the original.

With classic rock style and performance, Marshall Headphones’ Major II Bluetooth carry the torch from their predecessor, offering warm and punchy wireless sound in a comfy design that won’t break the bank. The bass gets a little hefty for us at times, but with solid Bluetooth performance, and battery life for days — all at a nice price — these cans are ripe for a breakout debut in the highly-competitive wireless market.