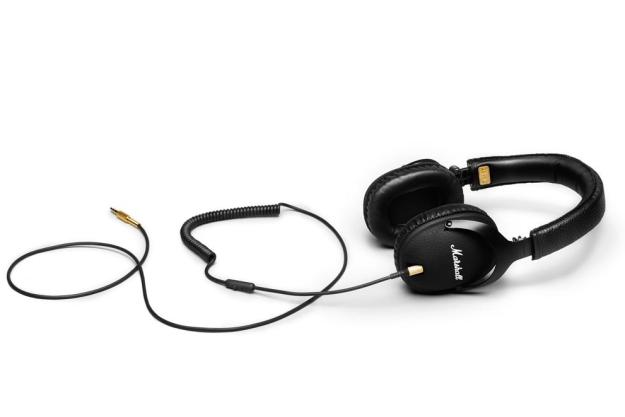 “While we weren’t bowled over by Marshall Monitor’s sound, we wouldn’t kick it out of bed in the morning, either.”

Those who have dabbled even marginally into the realm of Rock ‘n Roll will likely be familiar with Marshall audio. For many of us, the name invokes a fistful of vivid images brimming with screaming guitars, stale lager, and countless stages bathed in the pink glow of par cans. One image much less likely to come to mind, however, is one of headphones.

Like so many companies before it, Marshall aims to gain a foothold in the sprawling market of consumer headphones, branding its illustrious white lettering across a full lineup of designs. The company’s top tier model is the Monitor, a $200 over-ear headset that borrows some poignant touch points from Marshall’s famous cabinets to create a truly nostalgic aesthetic. But just what kind of sound can we expect from the seeds of such royal Rock lineage? We recently spent some quality time with the little black cans to find out. Here’s how it played out.

Pulling away the tan cover of the cubed box revealed a slim black headset, its dimpled frame folded in on itself into a neat package for compact storage. Beneath the headset was a sturdy canvas travel bag containing a removable headphone cable tipped with glittering gold jacks, and coiled in the middle like a 70’s-style guitar cord.

The Monitor is designed to instantly draw you in with familiar surfaces and bright brass embellishments that bring the full experience of the company’s storied history to your fingertips. And we have to say, on this point, Marshall succeeded brilliantly.

… placing the extremely tight band around the neck for ear breaks is a bit like wearing a choker collar, and those with bigger heads may find the Monitor less inviting.

The headband is constructed of sturdy matte metal, wrapped entirely in a slim vinyl leather sheath. The cover has a feeling of quality despite it’s “faux” status, and the top section is covered in a rugged split surface. A soft pad runs the length of the interior of the band. The cover is held in place by shiny brass plates on each end which also indicate the stereo channels. The “Y” shaped arms that attach the earcups adjust for size and are hinged to allow the cups to fold into the narrow bow.

The earcups are narrow, shaped like small turtle shells. The cups’ exterior are embossed with the white Marshall logo, and riddled with the same dimpled texture as the headband cover to evoke the feel of a guitar cabinet. On the interior of each earcup is an ample ring of vinyl padding, surrounding the headset’s 40mm dynamic drivers.

Pulling softly on the interior pad reveals the Monitor’s most unique feature: Beneath the removable pads are small felt inserts which cover the drivers. Marshall calls the inserts the “F.T.F. System.” The idea is to give the listener control over the headset’s sound curve, allowing removal of the inserts for a sharper treble response. We’ll dig deeper into that in the performance section.

As mentioned above, the removable headphone cable is reminiscent of a guitar cord, and has notched brass terminals at each point. A small, single-button control microphone extends from the input for receiving phone calls, hanging just above the cable’s miniature coils. Dual inputs on the earcups allow daisy chaining to allow for sharing with other listeners.

Those who have smaller features will likely enjoy the Monitor’s succinct, snug fit. The earcups press tightly to the head allowing for ample noise isolation, and the padding is soft enough for extended listening sessions. However, placing the extremely tight band around the neck for ear breaks is a bit like wearing a choker collar, and those with bigger heads may find the Monitor less inviting.

As we touched on before, the adaptability of the Monitor’s insert filters allows for two distinct sound signatures. To use the parlance of the genre (not “of our time”, Dude), switching between the two sounds is a bit like going from a tired old tube amp, to a new solid state model. Being partial to experiencing as much detail as possible, we chose the filter-free setup for most of our listening. Though the treble was a bit sharp at times, when we listened with the inserts in, large amounts of frequency information were masked.

… contrary to our experience with Marshall cabinets, the Monitor had a decidedly light and delicate approach to the midrange and upper register.

We’d hoped the Monitor would dig deep into the crunchy tones of electric guitar, reproducing the instrument at full force like the flames of a Hendrix drug torrent. But the headset never quite dug out the raw timbre of guitars as much as we’d like. In fact, contrary to our experience with Marshall cabinets, the Monitor had a decidedly light and delicate approach to the midrange and upper register.

We liked the Monitor best when we auditioned our warmer rock and acoustic selections. James Taylor’s “You’ve Got a Friend” was displayed with a smooth and detailed balance. The 70’s bass had a warm, firm presence in the center, and the multiple acoustic guitars at the edges of the stereo field were thickly drawn above the hand drums and shakers. There were also some impressive moments of sparkling instrumental separation on rock and electronic tracks. While the Monitor never reached the deeper dimension of detail we expect from high-end headphones, its soft touch made for some brilliantly clear listening.

When we auditioned brighter sections from our catalog, there was an occasional sibilant ring to cymbals that could introduce some ear fatigue. While heavier ride and crash cymbals were often silvery, with well-defined stick work, hi-hats were known to ride somewhere between sparkling and harsh — sometimes spilling over into the latter category. The issue seemed to be confounded by a midrange that was occasionally unable to compete with the more acute peripheries of the sound signature. Still, for most applications the top end was pleasantly light and tactile.

The Monitor’s bass response was surprisingly powerful. While certain test selections revealed a bit too much force in comparison with the midrange, for the most part the bass was held in balance. When we cued up hip-hop and dubstep tracks, the headset easily reached down into the lower regions, pushing deep grooves that rang powerfully beneath the clean snare snaps and vocals above it. B.I.G’s Life After Death definitely kept our head moving to the beat with smooth, firm grooves.

While we weren’t bowled over by Marshall Monitor’s sound, we wouldn’t kick it out of bed in the morning, either. There were some balance issues between the dainty upper floor, and the brazen bass, but overall the headset was a fairly solid performer. Those looking for a higher level of detail and balance may want to look into the Beyerdynamic Custom One Pro, which has elite sound, and its own more accessible version of frequency alteration. That said, the Monitor offers cool styling, good sound isolation, and two ways to listen. If you need a slim travel headset, and you love that Marshall look, we suggest you give the Monitor a try.