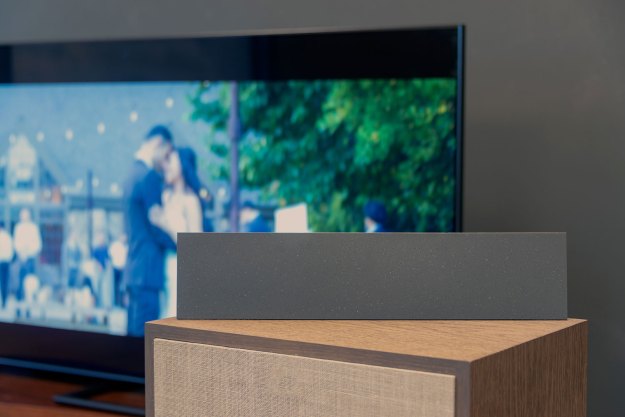 “Mohu’s Blade is a tough, attractive antenna that will fulfill your HD-TV needs.”

The rabbit ears of years past have been replaced by sleeker, flat and simple antennas that can hang out in windows or on walls, but they still can be an eyesore. At the very least, having a large black or white square blocking out part of a window is less than ideal when you want an unobstructed view of outside.

Popular Antenna maker Mohu has tried to mitigate this problem, designing many of its products to be used in different parts of the home, but its latest HD antenna, the Mohu Blade ($45), is one of its first to meld an innocuous look with engineering that enables it to work both inside and out. The Blade is designed to allow you to put it almost anywhere, but as we found out, some locations are still better than others.

The Blade comes in a box with a sturdy cardboard shell that’s simple and no fuss, a philosophy that seems to influence just about every facet of setting up and using the antenna. Within the box is everything you might need for setup, including the Blade itself, a 10-foot coaxial cable (about average for antenna pack-in cables), a coax L-bend adapter, a USB power cord and USB to AC adapter. There’s also a “kickstand” for the antenna, plus wall-mounting equipment.

The Blade looks unique, and easily stands apart from the many window-mounted HD antennae that are common these days. Designed as a solid rectangular slab of metal, the Blade lives up to its name, looking almost like a stubby, flat blade from a primitive weapon or gardening tool. Don’t let our imagination fool you into thinking this is an ornate device by any means, though. In fact, it’s utterly plain and in this case we mean that in a good way.

The Blade’s finish is a dark, matte grey that will easily match just about any entertainment system with a dark color scheme, or hide in plain sight when mounted outdoors. Mohu designed the Blade to resemble a small soundbar, and while we see the resemblance, you probably won’t mistake it for one – it looks more like a bit of minimalist decoration.

Designed to blend in, the Blade was also built with flexibility in mind. There are several ways to set it up, all of which are straight forward.

The Blade lives up to its name, looking almost like a primitive weapon or gardening tool.

The first and easiest method is to set the Blade on a flat surface, either under your TV or within range of it and an AC or USB outlet. The Blade can either lay flat, or be propped up with the included kickstand, which slots into one of two notches under the antenna. Similarly, it can be wall mounted, depending on where you get the best reception. The L-bend adapter is helpful, especially if you’re running cable through walls or behind furniture, but you don’t need it.

To help boost reception, the Blade relies on a USB power cable, which is as convenient as it gets for a powered antenna. If you’re using a device like the AirTV or a PC, for instance, you don’t even need to worry about getting close enough to your TV or a wall outlet. Otherwise, the AC adapter is a welcome addition.

Once connected, the next step is to scan for channels on whatever device you’re watching with. From there, you’ll be able to watch free TV over the air. How many channels and the reliability, of course, will depend heavily on both where the Blade is positioned in (or outside of) your home, and your home’s location.

The Blade is omnidirectional, meaning it can ostensibly pick up channels regardless of its orientation, but we noticed better reception in windows than at the center of the room. This isn’t surprising – most antenna models tend to do best when positioned as close to a window as possible – but it is a bit disappointing as it limits the usable range. The Blade has a 40-mile reception, which is well within the range of our nearest tower, but performance varied heavily depending on where the antenna was situated.

The Blade can ostensibly pick up channels regardless of its orientation, but we noticed better reception in windows.

Under the TV, we were able to pull in a total of 20 channels, only one of which, NBC, is a major network. When we put the antenna in the window as you would a Mohu Releaf or ClearStream Eclipse, the channel count jumped up to 33, including all major network channels, save the Fox affiliate. Given the sizable boost gained by moving the antenna to the window, we wager it would perform just as well, if not better, in outdoor set ups as well, though our by-the-book apartment management company made such a test impossible.

Compared to other amplified antennas the Blade’s reception is respectable, but by no means the top performer. For instance, the $45 Antop’s Paperthin Smartpass, which boasts a similar “install anywhere” design as the Blade, pulled in 40 total channels and all available networks in either the window or next to the TV in our testing. The only difference between the two is that the Antop is indoor-only. On the other hand, by installing the Blade by the window, it was able to out-perform the $70 ChannelMaster indoor/outdoor Smartenna’s 30-channel pull in the same location

It’s worth stressing here that, while the Blade does almost as well as the Antop when placed in the window, the Antop’s mid-room numbers are twice as high as the Blade’s. We will stress here that your results may vary due to your distance and directionality from the signal tower, but from our experience the Blade will serve you best as a window or wall-mounted antenna, rather than placed under a TV or hidden on a book shelf.

As for reliability, the Blade is excellent at any installation. Other than some occasional minor stuttering or artifacting (which you’ll get with just about any antenna) the picture came through clearly, and maintained a smooth, consistent signal regardless of placement.

Mohu offers a one-year limited warranty covering workmanship and material defects for all their products. A 30-day return period is also offered for a full refund, but only on products purchased directly from Mohu.

At $45, the Blade’s design considerations and solid performance make it a solid choice, but we were a bit disappointed that, even with a boosted signal, the antenna relied on setup near a window for best performance indoors. That hamstring’s one of its defining features – the ability to mount it anywhere. Still, it’s a good antenna with excellent durability. That alone helps it stand out in a crowded market.

The are ­many antennas out there, and while some might be better tuned to your specific location or setup, the one that comes closest to a true alternative in terms of design is Mohu’s own Curve, which starts at just $30.

As for performance for the money, we’d point to the $45 Antop Paperthin Smartpass mentioned above which pulls in more channels and works in more locations — though the design isn’t as seamless.

Since the Blade is essentially a short, sturdy sheet of metal, longevity and durability shouldn’t be issues. It’s built to work both as an indoor and outdoor antenna, and we anticipate this device will last you quite a while.

There are many antenna models on the market, but the Mohu Blade’s durability, small footprint, and generally solid performance make it a worthy contender on the list of potential choices.